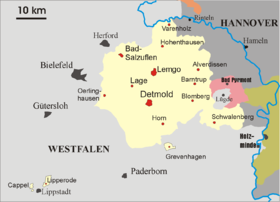 Lippe (later Lippe-Detmold and then again Lippe) was a historical state in Germany. It was located between the Weser River and the southeast part of the Teutoburg forest.

The founder of what would become the Principality of Lippe was Bernhard I, who received a grant of the territory from Lothair III, Holy Roman Emperor and King of the Germans in 1123. Bernhard I assumed the title of Lord of Lippe. Bernhard's successors inherited and obtained several counties. Lord Simon V was the first ruler of Lippe to style himself as a count.

Following the death of Simon VI in 1613, the principality was split into three counties; Lippe-Detmold went to Simon VII, Lippe-Brake to Otto and Lippe-Alverdissen went to Philip I. The Lippe-Brake county was reunited with the main Detmold line in 1709. Another branch of the family was founded by Jobst Herman, a son of Simon VII, who was founder of the Lippe-Biesterfeld line.

The Counts of Lippe-Detmold were granted the title of Prince of The Empire in 1789.

Shortly after becoming a member state of the German Empire in 1871, the Lippe-Detmold line died out on 20 July 1895. This resulted in an inheritance dispute between the neighboring principality of Schaumburg-Lippe and the Lippe-Biesterfeld line. The dispute was resolved by the Imperial Court in Leipzig in 1905, with the lands passing to the Lippe-Biesterfeld line who, until this point, had no territorial sovereignty.

The Principality of Lippe came to an end on 12 November 1918 with the abdication of Leopold IV, with Lippe becoming a Free State. In 1947, Lippe merged into the state of North Rhine-Westphalia.

The monarchy of Lippe was abolished in 1918.

Heads of the House of Lippe