The Duchy of Jülich (German: Herzogtum Jülich; Dutch: Hertogdom Gulik; French: Duché de Juliers) comprised a state within the Holy Roman Empire from the 11th to the 18th centuries. The duchy lay left of the Rhine river between the Electorate of Cologne in the east and the Duchy of Limburg in the west. It had territories on both sides of the river Rur, around its capital Jülich – the former Roman Iuliacum – in the lower Rhineland. The duchy amalgamated with the County of Berg beyond the Rhine in 1423, and from then on also became known as Jülich-Berg.

Its territory lies in present-day Germany (part of North Rhine-Westphalia) and in the present-day Netherlands (part of the Limburg province), its population sharing the same Limburgish dialect. 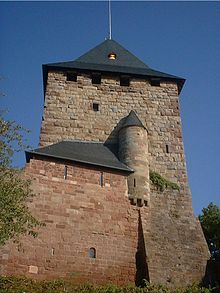 The first count in the Jülichgau of Lower Lorraine, Gerhard I, was mentioned[by whom?] in 1003; his grandson Gerhard III began to call himself Count of Jülich in 1081. William IV, count from 1219 on, significantly enlarged the territory and in 1234 granted Jülich town privileges, provoking the Cologne Archbishop Konrad von Hochstaden, whose troops devastated the city five years later. William IV's son Walram (Count from 1278 to 1297) remained a fierce opponent of the Bishopric, supporting Duke John I of Brabant at the 1288 Battle of Worringen against Archbishop Siegfried II of Westerburg. Though Walram's younger brother Count Gerhard V had sided with German king Adolf of Nassau against his rival Albert I of Habsburg, he managed to retain his territories after Adolf of Nassau lost the Battle of Göllheim in 1298, and in 1314 supported the coronation of Louis IV of Wittelsbach at the nearby City of Aachen, once more against the will of the Cologne bishop. The long-time conflict came to an end when Gerhard's younger son Walram became Archbishop of Cologne in 1332. His elder brother Count William V in 1336 received the title of a margrave from Emperor Louis IV, and in 1356 Emperor Charles IV of Luxembourg raised William V to the rank of duke. His son Duke William II, however, became entangled in a fierce feud with the Emperor's half-brother Wenceslaus of Luxembourg, Duke of Brabant, whom he defeated at the Battle of Baesweiler in 1371.

Thereafter Jülich's history became closely intertwined with that of its neighbours: the Duchies of Cleves and Berg as well as Guelders and the County of Mark: Duke William II had married Mary, the daughter of Duke Reginald II of Guelders, and duchess herself after the death of her half-brother Reginald III of Guelders in 1371. William II settled the conflict with the Imperial House of Luxembourg and his son William III inherited both duchies. When in 1423 however his younger brother Rainald died without heirs, the Gelderland estates chose Arnold of Egmond as duke, while Jülich amalgamated with Berg.

In 1511 Duke John III of Cleves inherited Jülich and Berg through marriage with Maria of Jülich-Berg, the daughter of the last Duke, William IV. She inherited her father's estates: Jülich and Berg with the County of Ravensberg. From 1521 Jülich-Berg and Cleves formed the United Duchies of Jülich-Cleves-Berg in a personal union under Duke John III.

When the last duke of Jülich-Cleves-Berg died without direct heirs in 1609, the War of the Jülich succession broke out. It ended with the 1614 Treaty of Xanten, which divided the separate duchies between Palatinate-Neuburg and the Margraviate of Brandenburg. Jülich and Berg fell to Count Palatine Wolfgang William of Neuburg and after the last duke of Palatinate-Neuburg (also Palatine Elector from 1685) Charles III Philip had died without issue in 1742, Count Charles Theodore of Palatinate-Sulzbach (after 1777 also Duke of Bavaria) inherited Jülich and Berg. 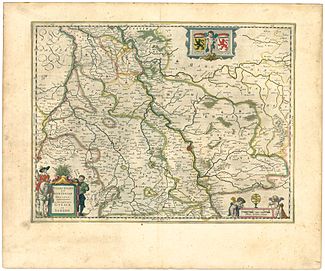 map of the Duchy of Jülich-Berg from Theater of the World, or a New Atlas of Maps and Representations of All Regions, edited by Willem and Joan Blaeu, 1645

– in union with Berg and Palatinate-Neuburg, after 1690 also with the Electoral Palatinate, from 1777 also with Bavaria–