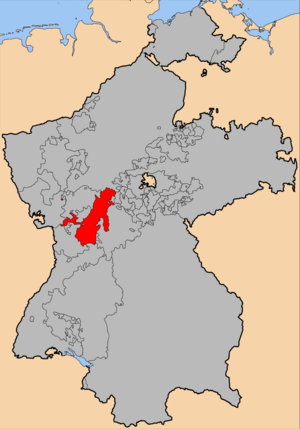 image_map_caption = Frankfurt (red) within the |
capital =
latd=50 |latm=7 |latNS=N |longd=8 |longm=41 |longEW=E|
leader1 = Napoleon I
title_leader = Protector
deputy1 = Karl Theodor von Dalberg
deputy2 = Eugene de Beauharnais
year_deputy1 = 1810–1813
year_deputy2 = 1813
title_deputy = Grand Duke|
stat_year1 = 1810
stat_area1 = 5173
stat_pop1 = 302100|
footnotes = The Grand Duchy of Frankfurt was a German of Napoleonic creation. It came into existence in 1810 through the combination of the former territories of the Archbishops of Mainz along with the Imperial city of Frankfurt itself.

Frankfurt lost its status as an in 1806 with the dissolution of the . The city was granted to the previous Archbishop of Mainz, , and became the Principality of Frankfurt. When Dalberg was forced to relinquish his to the in 1810, he combined his remaining territories of Aschaffenburg, Wetzlar, , Hanau, and Frankfurt into the new Grand Duchy of Frankfurt.

Although the grand duchy was named after the city of Frankfurt, Dalberg resided in the city of . However, the territory was actually ruled by French commissioners. By the constitution of the grand duchy, upon Dalberg's death, the state would be inherited by Napoleon's stepson, .

Dalberg abdicated in favour of Eugene on , following Napoleon's defeat at the . The grand duchy ceased to exist after December 1813, when the city was occupied by allied troops. While Frankfurt itself once again became a free city, most of the territory of the grand duchy was ultimately annexed by the Kingdom of Bavaria.