The Bishopric of Liège or Prince-Bishopric of Liège was a state of the Holy Roman Empire in the Low Countries in present Belgium. It acquired its status as a prince-bishopric between 980 and 985 when Bishop Notger, who had been the bishop of Liege since 972, acquired the status of Prince-Bishop after he received secular control of the County of Huy from the emperor .

The Prince-Bishopric belonged from 1500 on to the Lower Rhenish-Westphalian Circle. It was headed by the Prince-Bishop of Liège. Its territory included most of the present Belgian provinces of Liège and Limburg, and some exclaves in other parts of Belgium and the Netherlands. The capital was Liège (which, as the bishopric, is Lüttich in German and Luik in Dutch). It briefly became a republic (the Liège Republic) from 1789 to 1791, before reverting to a Prince-Bishopric in 1791 then being annexed by France in 1795.

The boundaries were formed, to the North, by the diocese of Utrecht; to the East, Cologne; to the South, the dioceses of Trier and Reims; to the West, that of Cambrai. Thus the diocese of Tongeren extended from France, in the neighbourhood of Chimay, to Stavelot, Aachen, Gladbach, and Venlo, and from the banks of the Semois as far as Ekeren, near Antwerp, to the middle of the Isle of Tholen and beyond Moerdijk, so that it included both Romance and Germanic populations. The boundaries remained virtually unchanged until 1559.

The bishopric of Liège was never part of the Dutch Seventeen Provinces or the Spanish and Austrian Southern Netherlands, but from the 16th century onwards, its politics were strongly influenced by the dukes of Burgundy and later the Habsburgs, under the sovereignty of the family de la Marck (Dutch van der Marck). 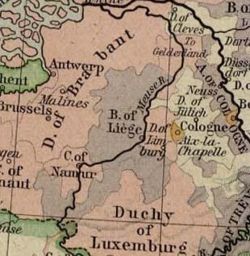 The Bishopric of Liège in 1477

The city of Maastricht fell under the joint jurisdiction of the Prince-Bishop of Liège and the Duke of Brabant (later the Estates-General of the United Provinces). The second city of the prince-bishopric thus kept its status aparte throughout the ancien regime.

Origin of the bishopric 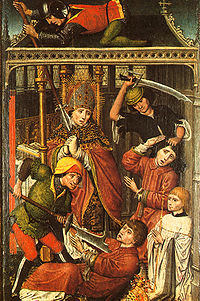 The martyrdom of Saint Lambert

St. Lambert's Cathedral and the palace of the Prince-Bishops (18th century)

Legend has it that the first bishop of Tongeren was Saint Maternus. This may refer to the legendary founder of the Archbishopric of Cologne, Maternus I, or Saint Maternus (Maternus II), who was also bishop of Cologne. Saint Servatius was the first confirmed bishop of Tongeren-Maastricht-Liège, who was referred to in documents as bishop of the Tungri. He died around 384 and was buried outside the Roman castrum in Maastricht. One of his successors, probably in the 6th century, moved the see of the bishopric to Maastricht. The conversion of the Franks continued under Falco (around 500 AD) and continued under Saint Domitian, Saint Monulphus and Saint Gondulphus (6th/7th centuries). Monulphus built a church over the grave of Saint Servatius in Maastricht, which later became the Basilica of Saint Servatius. During the whole of the seventh century the bishops had to struggle against paganism and opposition. St Amandus (647–650) and St Remaclus (650–660) even abandoned the episcopal see in discouragement. Both built several monasteries. St Theodard (660–669) died a martyr.

St Lambert (669–700) completed the conversion of the pagans in the Ardennes region. He was murdered at Liège around 705. Lambert was regarded as a martyr for his defence of church property against the avarice of the neighbouring lords. His successor, St Hubert, transferred the body of St Lambert to Liège, which was then a small settlement, a vicus, named Vicus Leudicus. On his grave Hubert built a chapel (St. Lambert's Cathedral) which became the nucleus of the city, and near which the permanent residence of the bishops was established.

Agilbert (768–784) and Gerbald (785–810) were both appointed by Charlemagne. Hartgar built the first episcopal palace. Bishop Franco, who defeated the Normans, is celebrated by the Irish poet Sedulius Scottus. Stephen (908–920), Richaire (920–945), Hugh (945–947), Farabert (947–958) and Rathier were promoted from the cloister school. To Stephen, a writer and composer, the Catholic Church is indebted for the feast and the Office of the Blessed Trinity. Ratherius absorbed all the learning of his time. Heraclius, who occupied the see in 959, built four new parish churches, a monastery, and two collegiate churches, he inaugurated in his diocese an era of great artistic activity known as Mosan art. 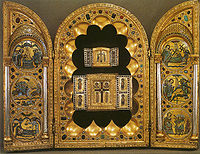 The Stavelot Triptych is an example of Mosan art, The Morgan Library & Museum, New York 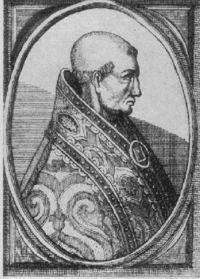 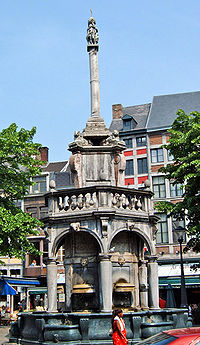 The domain of the Church of Liège had been gradually enlarged by donations and acquisitions. In the 10th century, the bishops received secular power over the county of Huy - then already part of the diocese. Notger (972–1008), by securing the feudal authority of Huy, became himself a sovereign prince. This status his successors retained until the French Revolution: and throughout that period of nearly eight centuries the Prince-Bishopric of Liège succeeded in maintaining its autonomy, though theoretically it was part of the Holy Roman Empire. This virtual independence was owed largely to the ability of its bishops, who on several occasions played an important part in international politics, being strategically positioned between France and Germany, .

Throughout the Middle Ages, the bishopric was further expanded with the lordship of Bouillon in 1096 (ceded to France in 1678), the acquisition of the county of Loon (French: Looz) in 1366 and the county of Horne in 1568.

Notger, the founder of the principality, also rebuilt the cathedral of St Lambert, as well as the episcopal palace. He was also involved in other building activities in the city, which flourished under his rule (churches of St Paul, St. John the Evangelist, Sainte-Croix and St Denis). This bishop also strengthened the parochial organization of the city. He was one of the first church leaders to spread the observance of All Souls' Day, which he authorized for his diocese. Under Notger's administration, following up on the work of Heraclius, educational institutions in Liège flourished. With these two bishops (and Wazo) "The schools of Liège were, in fact, at that time one of the brightest literary foci of the period". In the 11th century the city was indeed known as the Athens of the North. "Liège for more than a century occupied among the nations a position in regard to science which it has never recovered". Subsequent bishops, Balderic of Looz (1008–18), Wolbodo (1018–21), Durandus (1021–25), Reginard (1025–38), Nitard (1038–42), the learned Wazo, and Theoduin (1048–75), valiantly sustained the heritage of Notger. The schools formed many brilliant scholars, and gave the Catholic church popes Stephen IX and Nicholas II. The diocese also supplied the University of Paris with a number of important doctors — William of Saint-Thierry, Gerard of Liège and Godfrey of Fontaines. Alger of Liège (1055–1131) was an important intellectual of the period. He was first appointed deacon of church of St Bartholomew and finally retired at the monastery of Cluny.

In the reign of Henry of Verdun (1075–91) a tribunal was instituted (tribunal de la paix) to prevent war and enforce the Peace of God. Otbert (1091–1119) increased the territory of the principality by purchasing the Lordship of Bouillon. He remained faithful to emperor Henry IV, who died as his guest. Henry of Namur (1119–21) was venerated as a martyr. During the administration of Alexander of Juliers (1128–34) the pope, the emperor and St Bernard visited Liège. The episcopate of Raoul of Zachringen was marked by the preaching of the reformer Lambert le Bègue, who is credited with founding the béguines.

Albert of Louvain was elected Bishop of Liège in 1191, but Emperor Henry VI, on the pretext that the election was doubtful, gave the see to Lothair of Hochstadt. Albero's election was confirmed by the pope but in 1192, shortly after he took office, he was assassinated by three German knights at Reims. It is probable that the emperor was privy to this murder but Albero was canonized. In 1195, Albert de Cuyck (1195–1200) formally recognized the political franchise of the people of Liège. During the 12th century, the cathedral chapter, along with the bishop, assumed a more important role in the history of the principality.

The struggles between the upper and lower classes, in which the prince-bishops frequently intervened, developed through the 13th and 14th centuries, and culminate in the 15th century in the pillage and destruction of the episcopal city. In the reign of Robert of Thourotte (1240–46), Saint Juliana — a nun of Cornillon Abbey — was led by certain visions to the project of having a feast established in honour of the Blessed Sacrament. After much hesitation, the bishop approved of her idea but death prevented the institution of the feast. The completion of the work was left to a former prior of the Dominicans in Liège, Hugh of Saint-Cher, who returned to the city as papal legate. In 1252 Hugh made the feast of the Blessed Sacrament an obligation throughout his diocese. John of Troyes, who, after having been archdeacon at Liège, was elected pope as Urban IV, encouraged the observance of the feast of Corpus Christi in the whole Church. Another archdeacon of Liège became pope under the name Gregory X and deposed the unworthy Henry of Gueldres (1247–74). The Peace of Fexhe, signed in 1316 during the reign of Adolph II de la Marck (1313–44), regulated the relations between the prince-bishop and his subjects. Nevertheless internal discord continued and the episcopate of Arnold of Horne (1378–89) was marked by the triumph of the popular party. In 1366, the county of Loon was annexed to the bishopric. 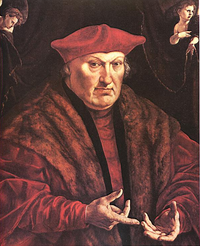 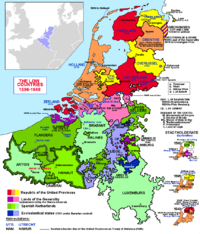 The Prince-Bishopric enclaved in the Low Countries, 1556–1648

Upon the death of Louis of Male, count of Flanders, in 1384, the Low Countries began their unification within the Burgundian Netherlands. Though the Principality was still nominally independent, the Dukes of Burgundy have had an increasing influence on its government. Louis of Bourbon (1456–82) was placed on the throne of Liège by the political machinations of Philip the Good, Duke of Burgundy. Burgundy coveted the principality. The destruction of Dinant in 1466, and of Liège in 1468, by Charles the Bold, marked the ending of democratic ascendancy in the Principality.

Charles V completed the union of the Seventeen Provinces in the 1540s, and unofficially also controlled the principality.[1] He nominated Erard de la Marck (1505–38) who brought a period of restoration. Erard was an enlightened protector of the arts. It was he who commenced the struggle against the Protestant reformers, which his successors carried forth, especially Gerard of Groesbeeck (1564–80). With the object of assisting in this struggle, Paul IV, by Bull (Super Universi, 12 May 1559), created new bishoprics in the Low Countries. The new bishoprics were created largely at the expense of the diocese of Liège; many of its parishes were given to the dioceses of Roermond, 's-Hertogenbosch, and Namur, or were added to the existing dioceses of Mechelen and Antwerp. The number of deaneries in the diocese of Liège was reduced to 13.

Most of the bishops in the 17th century were foreigners, many of them holding several bishoprics at once. Their frequent absences gave free scope for those feuds of the Chiroux and the Grignoux to which Maximilian Henry of Bavaria (archbishop of Cologne, 1650–88) put a stop by the Edict of 1681. In the middle of the 18th century the ideas of the French encyclopedists began to be received at Liège; Bishop de Velbruck (1772–84), encouraged their propagation and thus prepared the way for the Revolution Liégeoise. Partially connected with the French Revolution, a protest against the absolutist rule of prince bishop Cesar Constantijn Frans van Hoensbroeck developed into the 1789 Revolution in Liège. At the beginning of 1791, the revolution was crushed by troops on the orders of the Holy Roman Empire.

The prince-bishopric was dissolved in 1795, when it was annexed by France. Its territory was divided over the départements Meuse-Inférieure, Ourthe, and Sambre-et-Meuse.

Media related to Prince-Bishopric of Liège at Wikimedia Commons