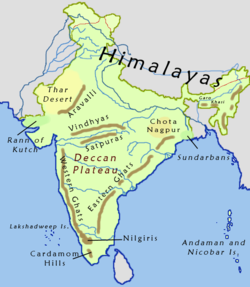 The Deccan Plateau [1] is a large plateau in India, making up the majority of the southern part of the country. It rises a hundred meters high in the north, rising further to more than a kilometers high in the south, forming a raised triangle nested within the familiar downward-pointing triangle of the Indian subcontinent's coastline.[2]

It extends over eight Indian states and encompasses a wide range of habitats, covering most of central and southern India.[3]

It is located between three mountain ranges: the Western Ghats form its western boundary, and the Eastern Ghats its eastern boundary. Each rises from their respective nearby coastal plains and nearly meet at the southern tip of India. It is separated from the Gangetic plain to the north by the Satpura and Vindhya Ranges, which form its northern boundary.

The name Deccan is an anglicised form of the Prakrit word dakkhin, itself derived from the Sanskrit word dákṣiṇa, meaning "south".[4] 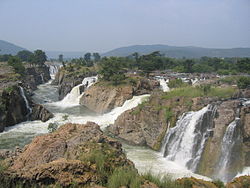 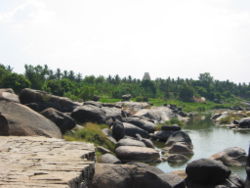 The Deccan Plateau lies south of the Indo-Gangetic plain. The Western Ghats Mountain Range is tall and blocks the moisture from the southwest monsoon from reaching the Deccan Plateau, so the region receives very little rainfall.[5][6] The eastern Deccan Plateau is at a lower elevation spanning the southeastern coast of India. Its forests are also relatively dry but serve to retain the rain to form streams that feed into rivers that flow into basins and then into the Bay of Bengal.[2][7]

Most Deccan plateau rivers flow from west to east. The Godavari River and its tributaries, including the Indravati River, drain most of the northern portion of the plateau, rising in the Western Ghats and flowing east towards the Bay of Bengal. The Tungabhadra River, Krishna River and its tributaries, including the Bhima River, which also run from west to east, drain the central portion of the plateau. The southernmost portion of the plateau is drained by the Kaveri River, which rises in the Western Ghats of Karnataka and bends south to break through the Nilgiri Hills at Hogenakal Falls into Tamil Nadu, then forming the Sivasamudram Falls at the island town of Shivanasamudra, the second-biggest waterfall in India and the sixteenth-largest in the world,[8] before flowing into the Stanley Reservoir and the Mettur Dam that created the reservoir and finally emptying into the Bay of Bengal.

The two main rivers which do not flow into the Bay Of Bengal are the Narmada and Tapti. They start in the Eastern Ghats and flow into the Arabian sea. All Deccan plateau rivers depend on the rains and dry up in the summers.

The climate of the region varies from semi-arid climate in the north to tropical in most of the region with distinct wet and dry seasons. Rain falls during the monsoon season from about June to October. March to June can be very dry and hot with temperatures exceeding 40°C regularly.

The volcanic basalt beds of the Deccan were laid down in the massive Deccan Traps eruption, which occurred towards the end of the Cretaceous period between 67 and 65 million years ago. Some paleontologists speculate that this eruption may have accelerated the extinction of the dinosaurs. Layer after layer was formed by the volcanic activity that lasted many thousands of years, and when the volcanoes became extinct, they left a region of highlands with typically vast stretches of flat areas on top like a table.The volcanic hotspot that produced the Deccan traps is hypothesized to lie under the present day island of Réunion in the Indian Ocean.

Typically the Deccan Plateau is made up of basalt extending up to Bhor Ghat near Karjat. This is an extrusive igneous rock. Also in certain sections of the region, we can find granite, which is an intrusive igneous rock. The difference between these two rock types is: basalt rock forms on eruption of lava, that is, on the surface (either out of a volcano, or through massive fissures—as in the Deccan basalts—in the ground), while granite forms deep within the Earth. Granite is a felsic rock, meaning it is rich in potassium feldspar and quartz. This composition is continental in origin (meaning it is the primary composition of the continental crust). Since it cooled relatively slowly, it has large visible crystals. Basalt, on the other hand, is mafic in composition—meaning it is rich in pyroxene and, in some cases, olivine, both of which are Mg-Fe rich minerals. Basalt is similar in composition to mantle rocks, indicating that it came from the mantle and did not mix with continental rocks. Basalt forms in areas that are spreading, whereas granite forms mostly in areas that are colliding. Since both rocks are found in the Deccan Plateau, it indicates two different environments of formation.

The Deccan is rich in minerals. Primary mineral ores found in this region are mica and iron ore in the Chhota Nagpur region, and diamonds, gold and other metals in the Golconda region.

The Deccan is home to many languages and people. Bhil and Gond people live in the hills along the northern and northeastern edges of the plateau, and speak various languages that belong to both the Indo-European and Dravidian families of languages. Marathi, an Indo-Aryan language, is the main language of the north-western portion of the Deccan plateau in the state of Maharashtra. Speakers of Telugu and Kannada, the predominant languages of Andhra Pradesh and Karnataka respectively, occupy those states' portions of the plateau. Tamil is the main language of Tamil Nadu to the south of the plateau, and Malayalam that of the hills and coast to the south-west, in the state of Kerala. The city of Hyderabad is an important centre of Urdu language in the Deccan; its surrounding areas also host a notable population of Urdu speakers. The Urdu dialect spoken in this region is also known as Dakshini or Deccani.

The chief crop is cotton, however, sugarcane, rice, and other crops are also common.

Apart from the states already mentioned, the state of Chhattisgarh is found in the northeast corner of the plateau. The two large cities in the Deccan are Hyderabad the capital of Andhra Pradesh and Bangalore the capital of Karnataka. Other major cities include Chennai, Pune, Nagpur and Aurangabad (in Maharashtra).

Of the early history the main facts established are the growth of the Mauryan empire (250 B.C.) and the invasion (A.D. 100) of the Scythic tribes known as the Sakas, Pahlavas and Yavanas, which led to the establishment of the power of the Kshaharata satraps in western India. Prominent dynasties of this time include the Cholas (3rd c. BC to 12th c. AD), Chalukyas (6th to 12th c.), Rashtrakutas (753–982), Hoysalas (10th to 14th c.), Kakatiya (1083 CE to 1323 CE) and Vijayanagara Empire (1336–1646). Ahir Kings once ruled over the deccan. In a cave inscription at Nasik, references is made to the reign of an Abhira prince named Ishwarsena,son od Shivadatta.[9][10]

In 1294, Ala-ud-Din Khilji, emperor of Delhi, invaded the Deccan, stormed Devagiri, and reduced the Yadava rajas of Maharashtra to the position of tributary princes (see Daulatabad), then proceeding southward to conquer the Telangana and Carnatic. In 1307, a fresh series of Muslim incursions led by Malik Kafur began in response to unpaid tributes, resulting in the final ruin of the Yadava power; and in 1338 the conquest of the Deccan was completed by Sultan Muhammad bin Tughluq. The imperial hegemony was brief, as soon Telingana and Karnataka reverted to their former masters. These defections by the Hindu states was soon followed by a general revolt of the Muslim governors, resulting in the establishment in 1347 of the independent Muslim dynasty of Bahmani.[11] The power of the Delhi sultanate evaporated south of the Narmada River.

In the power struggles which ensued, the Hindu kingdom of Telingana fell bit by bit to the Bahamani dynasty, who advanced their frontier to Golkonda in 1373, to Warangal in 1421, and to the Bay of Bengal in 1472. On the dissolution of the Bahmani empire in 1482, its dominions were distributed into the five Muslim states of Golkonda, Bijapur, Ahmednagar, Bidar and Berar, giving rise to the Deccan sultanates.[11] To the south of these the Hindu state of Carnatic or Vijayanagar still survived; but this, too, was destroyed, at the Battle of Talikota (1565) by a league of the Muslim powers. Berar had already been annexed by Ahmednagar in 1572, and Bidar was absorbed by Bijapur in 1609. Mughal interest in the Deccan also rose at this time; Ahmadnagar was partially incorporated in the Empire in 1598 and again in 1616, Bijapur in 1686, and Golkonda in 1688.

In 1674, Shivaji laid the foundation of the Maratha Empire which within 75 years of his death covered territory of over 250 million acres (1 million km²) or one-third of the Indian sub-continent. Marathas under Shivaji directly challenged the foreign rule of the Bijapur Sultanate and ultimately the mighty Mughal empire. Once the Bijapur Sultanate stopped being a threat to the Maratha Empire, Marathas became much more aggressive and began to frequently raid Mughal territory. The Marathas had conquered some part of central and western India by Shivaji Maharaj's death in 1680. After Shivaji, Sambhaji defended the Maratha empire from the Mughal onslaught led by Aurangzeb. Sambhaji didn't let Aurangzeb gain a single major victory before he was deceitfully captured and executed. Thereafter, Peshwas began commanding Maratha armies. After 1707, the Marathas acquired the right to levy tribute in southern India. After the death of Chhatrapati Shahu, the Peshwas became the de facto leaders of the Empire from 1749 to 1761, while Shivaji's successors continued as nominal rulers from their base in Satara. The Marathas kept the British at bay during the 18th century. By 1760, with the defeat of the Nizam in the Deccan, Maratha power had reached its zenith. However, dissension between the Peshwa and their sardars (army commanders) saw a gradual downfall of the Empire leading to its eventual annexation by the British East India Company in 1818 after the three Anglo-Maratha wars.

A few years later the Aurangzeb's viceroy in Ahmednagar, Nizam-ul-Mulk, established the seat of an independent government at Hyderabad in 1724. Mysore was ruled by Hyder Ali. During the contests for power which ensued from about the middle of the 18th century between the powers on the plateau, the French and British took opposite sides. After a brief course of triumph, the interests of France declined, and a new empire in India was established by the British. Mysore formed one of their earliest conquests in the Deccan. Tanjore and the Carnatic were shortly after annexed to their dominions, followed by the Peshwa territories in 1818.

In British India, the plateau was largely divided between the presidencies of Bombay and Madras. The two largest native states at that time were Hyderabad State and Mysore State; many smaller states existed at the time, including Kolhapur, Sawantwari, Travancore, and Cochin.

After independence in 1947, almost all native states were incorporated into the Republic of India. Hyderabad refused to join, and was annexed by the Indian Army in Operation Polo in 1948.[12] In 1956, the States Reorganisation Act reorganized states along linguistic lines, leading to the states currently found on the plateau.