:"This article is about an Indian river. For other meanings of this river names, see and ." 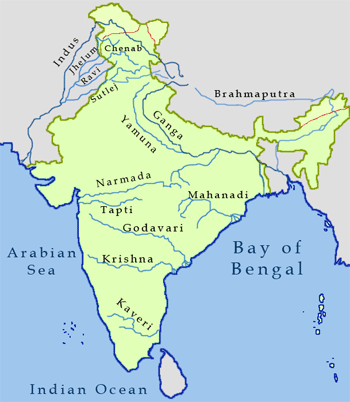 The River Krishna (:कृष्णा नदी))(meaning "dark" (feminine) in , also called the , is one of the longest s of (about 1300 km in length). It originates from in in the west and meets the at in , on the east coast. It also flows through the state of . The delta of the river is one the most fertile regions in India and was the home to ancient and kings.
is the largest city on the River Krishna.

The legendary source of the river is a spout from the mouth of a statue of a cow in the ancient temple of in Mahabaleshwar. Legend has it that Krishna is Lord Vishnu himself as a result of a curse on the trimurtis by Savitri. Also, its tributaries Venna and Koyana are said to be Siva and Brahma themselves. An interesting thing to notice is that 4 other rivers come out from the cow (bull's) mouth apart from Krishna and they all travel some distance before merging into Krishna. The rivers are Koyana, Venna(Veni), Savitri and Gayatri.

Ecologically, this is one of the disastrous rivers in the world, in that it causes heavy soil erosion during the season. It flows fast and furious, often reaching depths of over 75 feet (23 m). Ironically, there is a saying in Marathi (language of ) "sunt vaahate Krishnamaai" which means "quiet flows Krishna". This term is also used to describe how a person should be, as quiet as Krishna. But, in reality, Krishna causes a high degree of erosion between June and August. During this time, Krishna takes fertile soil from , and western towards the delta region.

Its most important tributary is the , which is formed by the and that originate in the . Other tributaries include the , (and its tributaries such as the feeding into the Upper Bhima River Basin), , , , , , Musi River and .

Two big s have been constructed on the river, one at called and the other at Nagarjuna Hill. The latter, the , is considered to be the largest earth dam in the world with a natural reservoir spanning tens of square kilometres.

Popular pilgrim spots like Audumber and Narsobawadi are located on the banks of river Krishna near in Maharashtra state.More pilgrim spots especially that of Srisailam, one of the twelve jyotirlingas which also has a shrine for one of the shaktipeethasis on the river. Nagarjuna konda was a Buddhist centre under and once was a centre for buddhist learning. near Guntur is also a buddhist and a Hindu site dedicated to Siva, the international festival was celebrated here with the presence of . on its banks has a rich and great temple on the hill of Indrakeeladri a temple of .

Krishna river rises in the Western Ghats at an elevation of about 1337 m just north of , about 64 km from the Arabian Sea and flows for about 1400 km and outfalls into the Bay of Bengal. The principal tributaries joining Krishna are the Ghataprabha, the Malaprabha, the Bhima, the Tungabhadra and the Musi.

Most part of this basin comprises rolling and undulating country except the western border which is formed by an unbroken line of ranges of the Western Ghats. The important soil types found in the basin are black soils, red soils, laterite and lateritic soils, alluvium, mixed soils, red and black soils and saline and alkaline soils.

An average annual surface water potential of 78.1 km³ has been assessed in this basin. Out of this, 58.0 km³ is utilisable water. Culturable area in the basin is about 203,000 km², which is 10.4% of the total culturable area of the country.