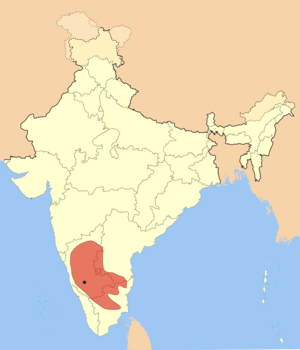 The Hoysala rulers were originally hill people of Karnataka, an elevated region in the range. In the 12th century, taking advantage of the internecine warfare between the then ruling and kingdoms, they annexed areas of present day Karnataka and the fertile areas north of the delta in present day . By the 13th century, they governed most of present-day Karnataka, parts of Tamil Nadu and parts of western in India.

The Hoysala era was an important period in the development of art, architecture, and religion in . The empire is remembered today primarily for its temple architecture. Over a hundred surviving temples are scattered across Karnataka, including the well known at Belur, the Hoysaleswara Temple at Halebidu, and the Kesava Temple at Somanathapura. The Hoysala rulers also patronised the fine arts, encouraging literature to flourish in Kannada and Sanskrit.

Kannada folklore tells of a young man, Sala, who was instructed by his guru Sudatta to strike dead a tiger he encountered near the temple of the Goddess Vasantika at Sosevur. The word "strike" literally translates to "hoy" in Hale Kannada (Old Kannada), hence the name "Hoy-sala". This legend first appeared in the Belur inscription of Vishnuvardhana (1117), but owing to several inconsistencies in the Sala story it remains in the realm of folklore.

Early inscriptions, dated 1078 and 1090, have implied that the Hoysalas were descendants of the by referring to the Yadava "vamsa" (clan) as Hoysala "vamsa". But there are no early records directly linking the Hoysalas to the Yadavas of North India.

Historians refer to the founders of the dynasty as natives of , based on numerous inscriptions calling them "Maleparolganda" or "Lord of the Male (hills) chiefs" ("Malepas").

Vishnuvardhana's ambition of creating an independent empire was fulfilled by his grandson Veera Ballala II, who freed the Hoysalas from subordination in 1187.

Major political changes were taking place in the Deccan region in the early 14th century when significant areas of northern India were under Muslim rule. , the Sultan of Delhi, was determined to bring isolated under his domain and sent his commander, , on a southern expedition to plunder the Seuna capital in 1311.

By 1336, the Sultan had conquered the Pandyas of Madurai, the Kakatiyas of and the tiny kingdom of Kampili. The Hoysalas were the only remaining Hindu empire who resisted the invading armies.

The Hoysala administration supported itself through revenues from an agrarian economy.

Importing horses for use as general transportation and in army cavalries of Indian kingdoms was a flourishing business on the western seaboard.

In its administrative practices, the Hoysala Empire followed some of the well-established and proven methods of its predecessors covering administrative functions such as cabinet organisation and command, the structure of local governing bodies and the division of territory.

The kingdom was divided into provinces named "Nadu", "Vishaya", "Kampana" and "Desha", listed in descending order of geographical size.

An elite and well trained force of bodyguards known as "Garudas" protected the members of the royal family at all times. These servants moved closely yet inconspicuously by the side of their master, their loyalty being so complete that they committed suicide after his death.

The defeat of the Jain Western Ganga Dynasty by the Cholas in early 11th century and the rising numbers of followers of Vaishnava Hinduism and in the 12th century was mirrored by a decreased interest in .

While the origin of faith is debated, the movement grew through its association with Basavanna in the 12th century.

Hoysala society in many ways reflected the emerging religious, political and cultural developments of those times. During this period, the society became increasingly sophisticated. The status of women was varied. Some royal women were involved in administrative matters as shown in contemporary records describing Queen Umadevi's administration of Halebidu in the absence of Veera Ballala II during his long military campaigns in northern territories. She also fought and defeated some antagonistic feudal rebels.

Trade on the west coast brought many foreigners to India including Arabs, Jews, , Chinese and people from the .

Temple building served a commercial as well as a religious function and was not limited to any particular sect of Hinduism. merchants of Halebidu financed the construction of the Hoysaleswara temple to compete with the Chennakesava temple built at Belur, elevating Halebidu to an important city as well. Hoysala temples however were secular and encouraged pilgrims of all Hindu sects, the Kesava temple at Somanathapura being an exception with strictly Vaishnava sculptural depictions.

The Hoysala court supported scholars such as , Rudrabhatta, Harihara and his nephew Raghavanka, whose works are enduring masterpieces in Kannada. In 1209, the scholar Janna wrote "Yashodharacharite", the story of a king who intends to perform a ritual sacrifice of two young boys to a local deity, Mariamma. Taking pity on the boys, the king releases them and gives up the practice of human sacrifice.

, a Brahmin (believer of monistic philosophy), was the earliest well known writer whose patron was Chandramouli, a minister of King Veera Ballala II.

Harihara, (also known as Harisvara) a writer and the patron of King Narasimha I, wrote the "Girijakalyana" in the old Jain "Champu" style which describes the marriage of Lord and in ten sections.

In Sanskrit, the philosopher wrote "Rigbhshya" on Brahmasutras (a logical explanation of Hindu scriptures, the Vedas) as well as many polemical works rebutting the doctrines of other schools of . He relied more on the literature than the Vedas for logical proof of his philosophy.

The modern interest in the Hoysalas is due to their patronage of art and architecture rather than their military conquests. The brisk temple building throughout the kingdom was accomplished despite constant threats from the Pandyas to the south and the Seunas Yadavas to the north. Their architectural style, an offshoot of the Western Chalukya style,

The Chennakesava Temple at Belur (1117),

The support of the Hoysala rulers for the Kannada language was strong, and this is seen even in their epigraphs, often written in polished and poetic language, rather than prose, with illustrations of floral designs in the margins.