A typical view of the Konkan, consisting of white-sand beaches and palm trees (mostly coconut and betel nut).

The Konkan (Marathi/Konkani: कोंकण;) also called the Konkan Coast or Karavali is a rugged section of the western coastline of India from Raigad to Mangalore. The sapta-Konkan is a slightly larger region described in the Skanda-purana.

Konkan Division is also one of six administrative sub-divisions of the state of Maharashtra, comprising its coastal districts.

Residents of Konkan and their descendants are called Konkanis. The name may also refer specifically to the Konkani people, ethnic group of the region; most of whom speak the Konkani language. Besides the Konkanis the other major ethnic group are the Tuluvas, mostly living the districts of Dakshina Kannada and Udupi of Karnataka state.In Uttara kannada district Kannada is also widely spoken. The Sanskrit term Konkanastha (कोंकणस्थ), means "Resident of Konkan". 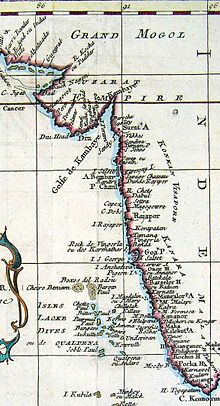 The precise definition of Konkan varies, but most include Maharashtra's districts of Raigad, Mumbai, Thane, Ratnagiri and Sindhudurg, the state of Goa, and the North Kanara, Udupi and South Kanara districts of Karnataka.

The sapta-Konkan as depicted in Skanda-purana stretches from Maharashtra to Karnataka . This is actually logical since there are a lot of similarities in the food-habits (rice and fish), crops cultivated (rice, mangoes, cashews and jackfruit) and the physique (tall and well-built) of people dwelling in this area.

The Konkan division is an administrative sub-division of Maharashtra which comprises all the coastal districts of the state.

The Gangavali flows in the district of ("North Kanara") in present-day "Karnataka State"; the cis-Gangavali portion (seen from Bombay) of this district is the southern-most part of the Konkan. The towns of Gokarn, Guhagar, Honavar, and Karwar fall within the Konkan.

The exact identity of the Mayura River, the northern limits of the historic Konkan, is indeterminate.

The Gabit, Gauda and Kunbi tribals of Konkan are among the original settlers in the region .

Tribal communities in Konkan include Konkana, Warli and Kolcha in Southern Gujarat, Dadra and Nagarhaveli and Thane district of Maharashtra. Katkaris are found more in Raigad and also some in Ratnagiri district.