The Royal Geographical Society (with the Institute of British Geographers) is a British learned society founded in 1830 for the advancement of geographical sciences. Today, it is a world centre for geography: supporting research, education, expeditions and fieldwork, and promoting public engagement and informed understanding of the world's peoples, places and environments. 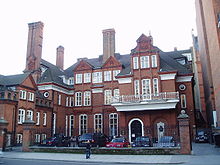 The Geographical Society of London was founded in 1830 under the name Geographical Society of London as an institution to promote the 'advancement of geographical science'. It later absorbed the older African Association, which had been founded by Sir Joseph Banks in 1788, as well as the Raleigh Club and the Palestine Association. Like many learned societies, it had started as a dining club in London, where select members held informal dinner debates on current scientific issues and ideas.

Founding members of the Society included Sir John Barrow, Sir John Franklin and Francis Beaufort. Under the patronage of King William IV it later became known as The Royal Geographical Society and was granted its Royal Charter under Queen Victoria in 1859.

From 1830 - 1840 the RGS met in the rooms of the Horticultural Society in Regent Street, London and from 1854 -1870 at 15 Whitehall Place, London. In 1870, the Society finally found a home when it moved to 1 Saville Row, London – an address that quickly became associated with adventure and travel. The Society also used a lecture theatre in Burlington Gardens, London which was lent to it by the Civil Service Commission. However, the arrangements were thought to be rather cramped and squalid.

A new impetus was given to the Society’s affairs in 1911, with the election of Earl Curzon, the former Viceroy of India, as the Society’s President (1911–1914). The premises in Saville Row were sold and the present site, Lowther Lodge in Kensington Gore, was purchased for £100,000[1] and opened for use in April 1913. In the same year the Society’s ban on women was lifted.

Lowther Lodge was built in 1874 for the Hon William Lowther by Norman Shaw, one of the most outstanding domestic architects of his day. Extensions to the east wing were added in 1929, and included the New Map Room and the 750 seat Lecture Theatre. The extension was formally opened by HRH the Duke of York (later King George VI) at the Centenary Celebrations on 21 October 1930.

The Society has been a key associate and supporter of many famous explorers and expeditions, including those of:

The history of the Society was closely allied for many of its earlier years with ‘colonial’ exploration in Africa, the Indian subcontinent, the polar regions, and central Asia especially. It has been a key associate and supporter of many notable explorers and expeditions, including those of Darwin, Livingstone, Stanley, Scott, Shackleton, Hunt and Hillary. From the middle of the 19th century until the end of World War I, expeditions sponsored by the Royal Geographical Society were frequently front page news, and the opinions of its President and Council would be avidly sought by journalists and editors.

The early history of the Society is inter-linked with the history of British Geography, exploration and discovery. Information, maps, charts and knowledge gathered on expeditions was sent to the RGS, making up its now unique geographical collections. The Society published its first journal in 1831 and from 1855, accounts of meetings and other matters were published in the Society Proceedings. In 1893, this was replaced by The Geographical Journal which is still published today.

The Society was also pivotal in establishing Geography as a teaching and research discipline in British universities, and funded the first Geography positions in the Universities of Oxford and Cambridge.

With the advent of a more systematic study of geography, the Institute of British Geographers was formed in 1933, by some academic Society fellows, as a sister body to the Society. Its activities included organising conferences, field trips, seminars and specialist research groups. Its journal, Transactions of the Institute of British Geographers, is now one of the foremost international journals of geographical research, publishing 'landmark' research from across the discipline.

The RGS and IBG co-existed for 60 years until 1992 when a merger was discussed. In 1994, members were balloted and the merger agreed. In January 1995, the new Royal Geographical Society (with the Institute of British Geographers) was formed.

Today the RGS-IBG is a voice and home for geography, both nationally and internationally. It is the largest Geographical Society in Europe and one of the largest in the world. It operates on a regional scale, with eight branches in the UK and one in Hong Kong.

It supports and promotes many aspects of geography including geographical research, education and teaching, field training and small expeditions, the public understanding and popularisation of Geography, and the provision of geographical information. The Society also works together with other existing bodies serving the geographical community, in particular the Geographical Association and the Royal Scottish Geographical Society.

In 2004, The Society’s historical Collections relating to scientific exploration and research, which are of national and international importance, were opened to the public for the first time. In the same year, a new category of membership was introduced to widen access for people with a general interest in geography. The new Foyle Reading Room and glass Pavilion exhibition space were also opened to the public in 2004 – unlocking the Society intellectually, visually and physically for the 21st century.

Governance and past Presidents 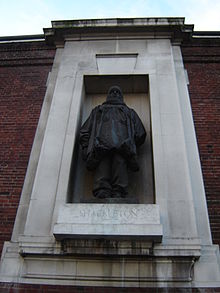 Statue of Shackleton by Charles Sargeant Jagger outside the society headquarters

The Society is governed by its Board of trustees called the Council, which is chaired by its President. The members of Council and the President are elected from its Fellowship. The council consists of 25 members, 22 of which are elected by Fellows and serve for a three year term. In addition to the elected trustees, there are Honorary members (who include the Duke of Kent as Honorary President) who sit on the council.

The society has five specialist committees that it derives advice from

Longer list at Presidents of the Royal Geographical Society.

There are four categories of individual membership:

Anyone with an interest in geography is eligible to apply to become a member of the RGS-IBG.

People aged between 14 and 24 currently studying, a recent graduate of geography or a related subject.

Fellowship of the Society is conferred to anyone over 21 who has a deep involvement with geography (through research, publication, profession, etc.) or who has been an ordinary member of the society for five previous years. The applicant must be proposed and seconded by existing Fellows and elected by the Council. Fellows are granted the right to use the initials "F.R.G.S." after their names.

Postgraduate Fellow of the Society

Is open to anyone who is a postgraduate student in Geography or an allied subject at a United Kingdom university.

Chartered Geographer (Teacher) is a professional accreditation available to teachers who can demonstrate competence, experience and professionalism in the use of geographical knowledge or skills in and out of the classroom, and who are committed to maintaining their professional standards through ongoing continuing professional development (CPD).

The Society's Research and Study Groups bring together active researchers and professional geographers in particular areas of geography. There are 27 active research groups, with each group organising their own seminars, conferences, workshops and other activities.[2]

The society also presents many awards to geographers that have contributed to the advancement of geography.[3]

The most prestigious of these awards are the Gold Medals (Founder's Medal 1830 and the Patron's Medal 1838). The award is given for "the encouragement and promotion of geographical science and discovery", and are approved by Queen Elizabeth II. The awards originated as an annual gift of fifty guineas from King William IV, first made in 1831, "to constitute a premium for the encouragement and promotion of geographical science and discovery". The Society decided in 1839 to change this monetary award into two gold medals: Founder’s Medal and the Patron’s. The award has been given to notable geographers including David Livingstone (1855), Nain Singh Rawat (1876),[4] Baron Ferdinand von Richthofen (1878), Alfred Russel Wallace (1892), and Frederick Courtney Selous (1893) to more recent winners including Professor William Morris Davis (1919), Sir Halford John Mackinder (1945), Professor L. Dudley Stamp (1949), Professor Richard Chorley (1987) and Professor David Harvey (1995). In 2004 Harish Kapadia was awarded the Patron's Medal for contributions to geographical discovery and mountaineering in the Himalayas, making him the second Indian to receive the award in its history. In 2005 the Founder's Medal was awarded to Professor Sir Nicholas Shackleton for his research in the field of Quaternary Palaeoclimatology and the Patron's Medal was awarded to Professor Jean Malaurie for a lifelong study of the Arctic and its people. In 1902 they awarded khan Bahadur Sher Jang a Sword of Honour (the Black Memorial) in recognition of his valuable services to geography

In total the society awards 17 medals and awards including Honorary Membership and Fellowships. Some of the other awards given by the Society include:

The society also offers 16 grants for various purposes ranging from established researcher grants to expedition and fieldwork teams to photography and media grants. The Ralph Brown and the Gilchrist Fieldwork grants are the largest grants awarded by the society each worth £15,000.