Maratha
This article is about the specific "Maratha caste". For the wider group of Marathi speakers, see Marathi people. 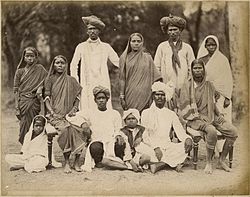 The Maratha (Marathi: मराठा, also Marhatta) are an Indian caste, predominantly in the state of Maharashtra. The term Marāthā has three related usages: within the Marathi speaking region it describes the dominant Maratha caste; outside Maharashtra it can refer to the entire regional population of Marathi-speaking people; historically, it describes the Maratha empire founded by Shivaji in the seventeenth century and continued by his successors, which included many castes.[1]

They primarily reside in the Indian states of Maharashtra, Madhya Pradesh, Haryana, Gujarat, Karnataka and Goa. Those in Goa and neighbouring Karwar are known specifically as Konkan Marathas as an affiliation to their regional and linguistic alignment.[2] The Marathas of Indore calls themselves as Dhangar Ahirs.[3]

All theories affirm, as do linguists, that the modern Marathi language has developed from the Prakrit known as Mahārāshtri. The words Maratha and Marathi may be a derivative of the Prakrit word Marhatta found in Jain Maharashtri literature, itself from Sanskrit Maharāṣhṭra. The etymology of the words "Maharashtra" is uncertain; the various theories include:

In theory, Marathas belong to one of the 96 different clans, known as the 96 Kuli Marathas or Chhānava Kule'.[6] The actual organization of this clan system is disputed in the popular culture and by historians. An authoritative listing was apparently first attempted in 1889 and a list finalised in 1956 by the Government of India.[citation needed]

The history of the Maratha caste prior to Shivaji Maharaj (1630–1680) is sparsely illuminated, although there is reference to the Marathas as the ruling class of the Deccan region in the Sri Lankan epic texts Mahavamsa and Dipavamsa.[when?]

The fifth rock edict of Ashok Maurya (273 to 236 B.C.) mentions the countries of the Rashtrikas and the Aparantas who were his feudatories and to whose dominions he had sent his "Dharma Matra". The Ceylonese chronicle Mahavamsa mentions the missions sent after the third Buddhist Council at Pataliputa - from which we[who?] know that one Rakkhita (Rashtrika) was sent to Vanavasi (afterwards the Capital of Kadamb Kingdom) and a Yona Damma Rakkhita was deputed to Apranta (North Kokan) and Maharakkhita to Maharashtra Country. In the cave temples of Maharashtra, which began to be excavated about the middle of first century BCE, we find among the list of donors princes and chiefs, who call themselves Mahabhojas and Maharathis. In the great cave temple of Kara, the lion pillar in the Court near the entrance was scooped out by a Maharathi named Agimitra. Varaha - Mihir a famous astronomer of the sixth century, used the word Maharashtra, which later came to be corrupted into Mahratta or Maratha. Hiuen-Tsang calls Pulakesi II the great Kshatriya king of Maharashtra (Mo-ho-la-cha) and describes his Maratha warriors as warriors from Mo-ho-la-cha who had hundreds of elephants which were intoxicated with liquor prior to battle and being invincible. He also goes on to say, "The king in consequences of possessing these men (The Marathas) and elephants, treats his neighbours with contempt. His plans and Undertaking are widespread, and his beneficient actions are felt over a great distance. His subjects obey him with perfect submission." Rajeshkar a Sanskrit author of the ninth century, used Marahatti (Marathi) in the feminine gender. The poet Jayamangal who lived in twelfth century, clearly defines the geographical limits of Maharashtra as follows : "Maharashtra is the name of country between the river Narmada and the province of Karnataka."

Hiuen-Tsang describes the Marathas and their country as", "This country is about 5000 li in circuit. The capital boarders on the west on a great river. It is about 30 li round. The soil is rich and fertile, it is regularly cultivated and very productive. The climate is hot, the disposition of the people is honest and simple, they are fall of stature, and of a stern, vindictive character. To their benefactor they are grateful, to their enemies relentless. If thy are insulted, they will risk their life to savage themselves. If they are asked to help one in distress, are going to seek revenge, they first give their enemy warning, then each being armed they attack each other with lances, When one turns to flee, the other pursues him, but they do not kill a man down (a person who submits). The country provides for a band of champions to the number of several hundred. Each time they are about to engage in conflict, they intoxicate themselves with wine, and then one man with lance in hand will meet ten thousand and challenges them in fight. "[7]

A number of Rajputs and Maratha warriors, including Shivaji's father Shahaji served the various Muslim kingdoms of the day. Shivaji's mother Jijabai was the daughter of Lakhuji Jadhav, a nobleman from Sindkhed Raja. The Maratha clans and their subdivisions were also involved in fighting amongst themselves, until Jijabai started a trend toward greater Maratha unity.[citation needed] They also took up various other professions like writers, poets, landowners, ministers, etc. 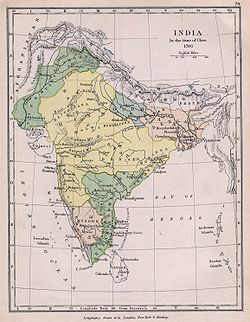 The extent of the Maratha Confederacy c.1760 AD, roughly corresponding to its peak (denoted by the yellow region)
Main article: Maratha Empire

Different Maratha (also called as Rastriks or Maha-rathis or Mahrattas) rulers during Medieval period (before twelfth century) include Satavahana, Chalukya and Rashtrakuta. They re-united into historical prominence under the leadership of Shivaji in the seventeenth century. Shivaji, born into the Bhosale clan of Marathas, secured an independent state by dint of lifelong struggle and thereby founded an empire, the remnants of which lasted until the independence of India in 1947. The state thus founded by Shivaji attained its zenith under the Peshwas in the eighteenth century, extending from the Indus in present-day Pakistan to Orissa in the east and from the Punjab to central Karnataka in the south. At its peak, the Maratha Empire established a protectorate over the Mughal emperor and paramountcy over the numerous Rajput chieftains of Gujarat, Rajasthan, Central India and elsewhere. This vast empire declined gradually after the Third Battle of Panipat (1761) in which Afghan leader Ahmad Shah Abdali defeated the Marathas; by 1849, all of present-day India had fallen to the British East India Company.

The history of the states and dynasties comprising the Maratha Empire constitutes a major portion of the history of late medieval India. While that extensive history is detailed elsewhere, the rise of the Marathas:

In 1798 Colonel Tone, who commanded a regiment of the Peshwa's army, wrote[9] of the Marāthas: "The three great tribes which compose the Marātha caste are the Kunbi or farmer, the Dhangar or shepherd, and the Gawli or cowherd; to this original cause may perhaps be ascribed that great simplicity of manner which distinguishes the Marātha people." [10] 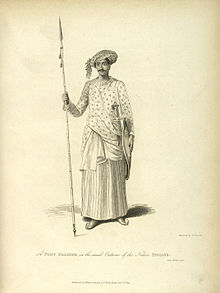 Engraving of a Maratha Soldier by James Forbes 1813

The empire also resulted in the voluntary relocation of substantial numbers of Maratha and other Marathi-speaking people outside Maharashtra, and across a big part of India.[citation needed] Thus, there are today several small but significant communities descended from these emigrants living in the north, south and west of India.[citation needed] These communities tend often to speak the languages of those areas, although many do also speak Marathi in addition.[citation needed] Notable Maratha families outside Maharashtra include Scindia of Gwalior, Gaikwad of Baroda, Ghorpade of Mudhol, Holkar of Indore and Bhonsle of Thanjavur.

Marathas have dominated the state politics of Maharashtra since its inception in 1960. Since then, Maharashtra has witnessed heavy presence of Maratha ministers or officials (which comprises 25% of the state) in the Maharashtra state government, local municipal commissions, and panchayats.[citation needed]

The Maratha Light Infantry regiment of the Indian Army is one of the oldest and most influential regiments. Its First Battalion, also known as the Jangi Paltan, was raised as far back in 1768 as part of the Bombay Sepoys. The Marathas came to special[clarification needed] attention in World War I and have been awarded several medals and awards, including.[citation needed]