The Indo-European languages are a family (or phylum) of several hundred related languages and dialects,[1] including most major current languages of Europe, the Iranian plateau, and South Asia and also historically predominant in Anatolia. With written attestations appearing since the Bronze Age, in the form of the Anatolian languages and Mycenaean Greek, the Indo-European family is significant to the field of historical linguistics as possessing the longest recorded history after the Afroasiatic family.

Suggestions of similarities between Indian and European languages began to be made by European visitors to India in the 16th century. In 1583 Thomas Stephens, an English Jesuit missionary in Goa, noted similarities between Indian languages, specifically Konkani, and Greek and Latin. These observations were included in a letter to his brother which was not published until the twentieth century.[4]

The first account by a western European to mention the ancient language Sanskrit came from Filippo Sassetti (born in Florence, Italy in 1540), a merchant who traveled to the Indian subcontinent. Writing in 1585, he noted some word similarities between Sanskrit and Italian (these included devaḥ/dio "God", sarpaḥ/serpe "serpent", sapta/sette "seven", aṣṭa/otto "eight", nava/nove "nine").[4] However, neither Stephens' nor Sassetti's observations led to further scholarly inquiry.[4]

In 1647, Dutch linguist and scholar Marcus Zuerius van Boxhorn noted the similarity among Indo-European languages, and supposed that they derived from a primitive common language which he called "Scythian". He included in his hypothesis Dutch, Albanian, Greek, Latin, Persian, and German, later adding Slavic, Celtic and Baltic languages. However, Van Boxhorn's suggestions did not become widely known and did not stimulate further research.

Gaston Coeurdoux and others had made observations of the same type. Coeurdoux made a thorough comparison of Sanskrit, Latin and Greek conjugations in the late 1760s to suggest a relationship between them. Similarly, Mikhail Lomonosov compared different languages groups of the world including Slavic, Baltic ("Kurlandic"), Iranian ("Medic"), Finnish, Chinese, "Hottentot", and others. He emphatically expressed the antiquity of the linguistic stages accessible to comparative method in the drafts for his Russian Grammar (published 1755).[5]

The hypothesis reappeared in 1786 when Sir William Jones first lectured on the striking similarities between three of the oldest languages known in his time: Latin, Greek, and Sanskrit, to which he tentatively added Gothic, Celtic, and Old Persian,[6] though his classification contained some inaccuracies and omissions.[7][dead link]

It was Thomas Young who in 1813[8] first used the term Indo-European, which became the standard scientific term (except in Germany[9]) through the work of Franz Bopp, whose systematic comparison of these and other old languages supported the theory. Bopp's Comparative Grammar, appearing between 1833 and 1852, counts as the starting point of Indo-European studies as an academic discipline.

The classical phase of Indo-European comparative linguistics leads from Franz Bopp's Comparative Grammar (1833) to August Schleicher's 1861 Compendium and up to Karl Brugmann's Grundriss, published in the 1880s. Brugmann's junggrammatische reevaluation of the field and Ferdinand de Saussure's development of the laryngeal theory may be considered the beginning of "modern" Indo-European studies. The generation of Indo-Europeanists active in the last third of the 20th century (such as Calvert Watkins, Jochem Schindler and Helmut Rix) developed a better understanding of morphology and, in the wake of Kuryłowicz's 1956 Apophonie, understanding of the ablaut. 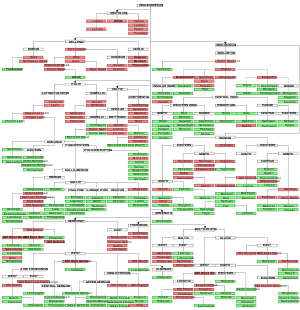 The various subgroups of the Indo-European language family include ten major branches, given in the chronological order of their earliest surviving written attestations:

In addition to the classical ten branches listed above, several extinct and little-known languages have existed:

Membership of these languages in the Indo-European language family is determined by genetic relationships, meaning that all members are presumed to be descendants of a common ancestor, Proto-Indo-European. Membership in the various branches, groups and subgroups or Indo-European is also genetic, but here the defining factors are shared innovations among various languages, suggesting a common ancestor that split off from other Indo-European groups. For example, what makes the Germanic languages a branch of Indo-European is that much of their structure and phonology can so be stated in rules that apply to all of them. Many of their common features are presumed to be innovations that took place in Proto-Germanic, the source of all the Germanic languages.

To the evolutionary history of a language family, a genetic "tree model" is considered appropriate especially if communities do not remain in effective contact as their languages diverge. Exempted from this concept are shared innovations acquired by borrowing (or other means of convergence), that cannot be considered genetic. In this case the so-called "wave model" applies, featuring borrowings and no clear underlying genetic tree. It has been asserted, for example, that many of the more striking features shared by Italic languages (Latin, Oscan, Umbrian, etc.) might well be areal features. More certainly, very similar-looking alterations in the systems of long vowels in the West Germanic languages greatly postdate any possible notion of a proto-language innovation (and cannot readily be regarded as "areal", either, since English and continental West Germanic were not a linguistic area). In a similar vein, there are many similar innovations in Germanic and Balto-Slavic that are far more likely to be areal features than traceable to a common proto-language, such as the uniform development of a high vowel (*u in the case of Germanic, *i/u in the case of Baltic and Slavic) before the PIE syllabic resonants *ṛ,* ḷ, *ṃ, *ṇ, unique to these two groups among IE languages, which is in agreement with the wave model. The Balkan sprachbund even features areal convergence among members of very different branches.

Using an extension to the Ringe-Warnow model of language evolution, early IE was confirmed to have featured limited contact between distinct lineages, while only the Germanic subfamily exhibited a less treelike behaviour as it acquired some characteristics from neighbours early in its evolution rather than from its direct ancestors. The internal diversification of especially West Germanic is cited to have been radically non-treelike.[15]

Specialists have postulated the existence of such subfamilies (subgroups) as Italo-Celtic, Graeco-Armenian, Graeco-Aryan, and Germanic with Balto-Slavic. The vogue for such subgroups waxes and wanes; Italo-Celtic for example used to be a standard subgroup of Indo-European, but it is now little honored, in part because much of the evidence on which it was based has turned out to have been misinterpreted.[16]

Subgroupings of the Indo-European languages are commonly held to reflect genetic relationships and linguistic change. The generic differentiation of Proto-Indo-European into dialects and languages happened hand in hand with language contact and the spread of innovations over different territories.

Rather than being entirely genetic, the grouping of satem languages is commonly inferred as an innovative change that occurred just once, and subsequently spread over a large cohesive territory or PIE continuum that affected all but the peripheral areas.[17] Kortlandt proposes the ancestors of Balts and Slavs took part in satemization and were then drawn into the western Indo-European sphere.[18]

Shared features of Phrygian and Greek[19] and of Thracian and Armenian[20] group together with the Indo-Iranian family of Indo-European languages.[21] Some fundamental shared features, like the aorist (a verb form denoting action without reference to duration or completion) having the perfect active particle -s fixed to the stem, link this group closer to Anatolian languages[22] and Tocharian. Shared features with Balto-Slavic languages, on the other hand (especially present and preterit formations), might be due to later contacts.[23]

The Indo-Hittite hypothesis proposes the Indo-European language family to consist of two main branches: one represented by the Anatolian languages and another branch encompassing all other Indo-European languages. Features that separate Anatolian from all other branches of Indo-European (such as the gender or the verb system) have been interpreted alternately as archaic debris or as innovations due to prolonged isolation. Points proffered in favour of the Indo-Hittite hypothesis are the (non-universal) Indo-European agricultural terminology in Anatolia[24] and the preservation of laryngeals.[25] However, in general this hypothesis is considered to attribute too much weight to the Anatolian evidence. According to another view the Anatolian subgroup left the Indo-European parent language comparatively late, approximately at the same time as Indo-Iranian and later than the Greek or Armenian divisions. A third view, especially prevalent in the so-called French school of Indo-European studies, holds that extant similarities in non-satem languages in general - including Anatolian - might be due to their peripheral location in the Indo-European language area and early separation, rather than indicating a special ancestral relationship.[26] Hans J. Holm, based on lexical calculations, arrives at a picture roughly replicating the general scholarly opinion and refuting the Indo-Hittite hypothesis.[27]

The division of the Indo-European languages into a Satem vs. a Centum group was devised by von Bradke in the late 19th century and is said by some[who?] to be outdated because of being based on just one phonological feature.

Some linguists propose that Indo-European languages form part of a hypothetical Nostratic macrofamily, and attempt to relate Indo-European to other language families, such as South Caucasian, Uralic (the Indo-Uralic proposal), Dravidian, and Afroasiatic. This theory, like the similar Eurasiatic theory of Joseph Greenberg, and the Proto-Pontic postulation of John Colarusso, remains highly controversial, however, and is not accepted by most linguists in the field. Objections to such groupings are not based on any theoretical claim about the likely historical existence or non-existence of such macrofamilies; it is entirely reasonable to suppose that they might have existed. The serious difficulty lies in identifying the details of actual relationships between language families; it is very hard to find concrete evidence that transcends chance resemblance, or is not equally likely explained as being due to borrowing (including Wanderwörter, which can travel very long distances). Since the signal-to-noise ratio in historical linguistics declines steadily over time, at great enough time-depths it becomes open to reasonable doubt that it can even be possible to distinguish between signal and noise.

PIE was an inflected language, in which the grammatical relationships between words were signaled through inflectional morphemes (usually endings). The roots of PIE are basic morphemes carrying a lexical meaning. By addition of suffixes, they form stems, and by addition of desinences (usually endings), these form grammatically inflected words (nouns or verbs). The hypothetical Indo-European verb system is complex and, like the noun, exhibits a system of ablaut.

The diversification of the parent language into the attested branches of daughter languages is historically unattested. The timeline of the evolution of the various daughter languages, on the other hand, is mostly undisputed, quite regardless of the question of Indo-European origins.

As the Proto-Indo-European language broke up, its sound system diverged as well, changing according to various sound laws evidenced in the daughter languages. Notable cases of such sound laws include Grimm's law in Proto-Germanic, loss of prevocalic *p- in Proto-Celtic, loss of intervocalic *s- in Proto-Greek, Brugmann's law in Proto-Indo-Iranian, as well as satemization (discussed above). Grassmann's law and Bartholomae's law may or may not have operated at the common Indo-European stage.

The following table presents a comparison of conjugations of the thematic present indicative of the verbal root *bʰer- of the English verb to bear and its reflexes in various early attested IE languages and their modern descendants or relatives, showing that all languages had in the early stage an inflectional verb system.

While similarities are still visible between the modern descendants and relatives of these ancient languages, the differences have increased over time. Some IE languages have moved from synthetic verb systems to largely periphrastic systems. The pronouns of periphrastic forms are in brackets when they appear. Some of these verbs have undergone a change in meaning as well.