The Central India Campaign was one of the last series of actions in the Indian rebellion of 1857, (also known as the First Indian War of Independence or Indian Mutiny). A small British and Indian Army (from the Bombay Presidency) overcame a disunited collection of states in a single rapid campaign, although determined rebels continued a guerilla campaign for another year.

Outbreak of the Rebellion 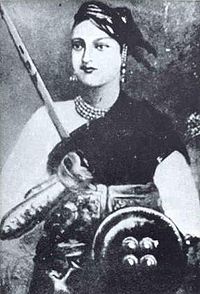 Lakshmibai, the Rani of Jhansi.

The area known to the British at the time as Central India is now occupied by parts of Madhya Pradesh and Rajasthan states. In 1857, it was administered as the Central India Agency and consisted of six large and almost 150 small states, nominally under Maratha or Mogul princes, but actually controlled to a greater or lesser degree by Residents or Commissioners appointed by the British East India Company. Opposition to British control centred on Jhansi, where the Rani Lakshmi Bai, widow of the last prince, opposed the British annexation of the state under the notorious doctrine of lapse.

The loyalty of the Indian soldiers (sepoys) of the East India Company's Bengal Army had been under increasing strain over the previous decade, and on May 10, 1857, the sepoys at Meerut, north of Delhi, broke into open rebellion. News of this outbreak spread rapidly, and most other units of the Bengal Army also rebelled.

Nine regiments of Bengal Native Infantry and three of cavalry were stationed in Central India. There was also a large Gwalior Contingent, raised largely from Oudh (or Awadh) and similar in organisation to the irregular units of the Bengal Army, but in the service of the Maharajah Jayajirao Scindia of Gwalior, who remained allied to the British. Almost all these units rose up against their officers during June and July. There were very few British units to oppose them, and Central India fell entirely out of British control.

At Jhansi, British officers, civilians and dependents took shelter in the fort on June 5. They emerged three days later and were murdered by the rebellious sepoys and irregulars. Rani Lakshmi Bai denied any complicity in this act but was nevertheless blamed by the British.

Over the next few months, most of the former Company regiments marched to take part in the Siege of Delhi, where they were eventually defeated. The Gwalior Contingent remained largely inactive until October, when they were led to defeat at Cawnpore by Tantya Tope. These defeats deprived the rebels of a substantial body of trained and experienced troops, and made the subsequent British campaign easier. Meanwhile, most of the now independent princes began raising levies and warring with each other, or demanding ransoms from each other on threat of force. The Nawab of Banda, who induced several units of sepoys to join his service on the promise of loot, appears to have been particularly rapacious.[1]

One Mogul prince, Firuz Shah, attempted to lead an army into the Bombay Presidency to the south, but was defeated by a small force under the acting Commissioner for Central India, Sir Henry Durand. Durand then overawed the Holkar Tukojirao II (the ruler of Indore in southern Central India), into surrender.

The Campaign to the fall of Kalpi 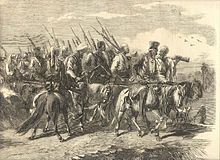 The Central India Field Force, under Sir Hugh Rose took the field around Indore in late December, 1857. The force consisted of two small brigades only. About half the troops were Indian units from the Bombay Presidency army, which had not been affected to the same extent by the tensions which led the Bengal Army to rebel. Rose would initially be opposed only by the various armed retainers and levied forces of the Rajahs, whose equipment and efficiency were sometimes in doubt. Much of the rebel attention was focused to the north of the region, where Tantya Tope and other leaders were attempting to aid the rebels in Awadh, making Rose's campaign from the south comparatively easy.

Rose's first mission was to relieve the town of Saugor, where a small European garrison was besieged. He accomplished this on February 5 after some hard-fought battles against Afghan and Pakhtun mercenaries at Rathgar. Thousands of local villagers welcomed him as a liberator, freeing them from rebel occupation[2]. . His force had then to wait at Saugor for several weeks while transport and supplies were collected.

They then advanced towards Jhansi. The rebels attempted to stand before the city but they were decisively defeated at Madanpur and fled, demoralised, into the city. Rose ignored instructions from the Commander in Chief to detach forces to assist two "loyal" Rajahs, and laid siege to Jhansi on March 24. On March 31, Tantya Tope led an army in an attempt to relieve the city. Even though he attacked at the most opportune moment, his scratch force was no match for Rose's troops, and he was defeated at the Battle of the Betwa the next day and forced to retreat. At the height of the hottest and driest part of the year, the rebels set fire to the forests to delay British pursuit, but the blaze disrupted their own army. They eventually retreated to Kalpi, abandoning all their guns.

Jhansi was stormed on April 5. There were a number of atrocities committed by the attackers, and much looting and indiscipline. 5,000 defenders and civilians died. (British casualties were 343). Rani Lakshmi Bai escaped, probably while Rose's cavalry were busy looting.

Rose was once again forced to pause while discipline and order was restored, but advanced on May 5 towards Kalpi. Once again, the rebels attempted to fight in front of the city, and once again the British won a decisive although largely bloodless victory, at Kunch on May 6. This led to demoralisation and mutual recrimination among the rebels, but their morale recovered when the Nawab of Banda reinforced them with his troops. On May 16, they fought desperately to save the city, but were again defeated. Although there were few British battle casualties, many of Rose's soldiers were struck down by sunstroke.

The recapture of Gwalior

With the fall of Kalpi, Rose thought the campaign was over and applied to go on sick leave. The rebel leaders managed to rally some of their forces, and agreed on a plan to capture Gwalior from its ruler, Maharajah Sindia, who had continued to side with the British. On June 1, the rebel army attacked Sindia's retainers at Morar, a large military cantonment a few miles east of Gwalior. A charge by the rebels' cavalry captured Sindia's artillery, following which most of Sindia's troops either deserted or defected. Sindia and a few adherents fled to the British garrison at Agra.

The rebels captured Gwalior, but there was no looting, other than from Sindia's treasury to pay the rebel troops. The rebels now wasted time celebrating and proclaiming the renewed rebellion. Rose had offered to remain in the field until his replacement arrived, and on June 12, he recaptured Morar, in spite of the great heat and humidity. Rani Lakshmi Bai was killed in a cavalry action near Kotah-ke-Serai on June 17. Over the next two days, most rebels abandoned Gwalior while the British recaptured the city, although there was some desperate resistance before the fort fell.

Most of the rebel leaders now surrendered or went into hiding, but Tantya Tope remained in the field. Aided by monsoon rains which delayed his pursuers, Tantya continued to dodge around Central India. Other leaders joined him, among them Rao Sahib, Man Singh, and Firuz Shah (who had been fighting in Rohilkhand). Eventually in April 1859, Tantya Tope was betrayed by Man Singh, and hanged.

Indian historians criticise the conduct of the Indian princes, most of whom were self-interested or effete, and the lack of leadership among the sepoys. In the East India Company's Army, no Indian soldier could attain a rank greater than that equivalent to a subaltern or senior warrant officer. Most of the sepoys' officers were elderly men who had attained their rank through seniority while seeing little action and receiving no training as leaders. The rebellion therefore depended on charismatic leaders such as Tantya Tope and Rani Lakshmi Bai, who nevertheless were regarded with jealousy and animosity by many other princes.

In many cases, the defenders of cities and fortresses fought well at first but were demoralised when relieving forces were defeated, and then abandoned easily defended positions without fighting.

By contrast, Durand, Rose, and their principal subordinates had acted quickly and decisively. Many of their forces came from the Bombay Army, which was not disaffected to the same degree as the Bengal Army.

Units awarded this honour were: