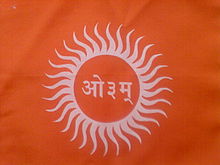 The flag and symbol of Arya Samaj

Arya Samaj (Sanskrit ārya samāja आर्य समाज "Arya Society") is a Hindu reform movement founded by Swami Dayananda on 10 April 1875.[1] He was a sannyasi who believed in the infallible authority of the Vedas. Dayananda emphasized the ideals of brahmacharya (chastity). There are 3–4 million followers of Arya Samaj worldwide.

Founding of the Arya Samaj 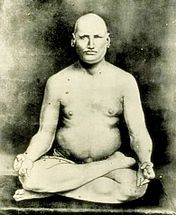 Between 1869 and 1873, Swami Dayananda Saraswati, a native of Gujarat, made his first attempt at reform in his native India. This attempt took the form of the establishment of "Vedic Schools" which put an emphasis on Vedic values, culture and religion to its students. The first was established at Farrukhabad in 1869, with 50 students enrolled in its first year. This initial success led to the founding of four additional schools in rapid succession at Mirzapur (1870), Kasganj (1870), Chhalesar (1870) and Varanasi (1873).

The Vedic Schools represented the first practical application of Swami Dayanand’s vision of religious and social reform. They enjoyed a mixed reception. On the one hand, students were not allowed to perform traditional idol worship (murtipuja in Hindi) at the school, and were instead expected to perform sandhya (a form of meditative prayer using mantras from the Vedas) and participate in agnihotra twice daily. Disciplinary action was swift and not infrequently severe. On the other hand, all meals, lodging, clothing and books were given to the students free of charge, and the study of Sanskrit was opened to non-Brahmins. The most noteworthy feature of the Schools was that only those texts which accepted the authority of the Vedas were to be taught. This was critical for the spiritual and social regeneration of Vedic culture in India.

The Vedic Schools soon ran into difficulties. Swami Dayanand had trouble finding qualified teachers who agreed with his views on religious reform, and there existed a paucity of textbooks which he considered suitable for instruction in Vedic culture. Funding was sporadic, attendance fluctuated considerably, and tangible results in the way of noteworthy student achievement were not forthcoming.

Consequentially, some of the schools were forced to close shortly after opening. As early as 1874, it had become clear to Swami Dayanand that, without a wide and solid base of support among the public, setting up schools with the goal of imparting a Vedic education would prove to be an impossible task. He therefore decided to invest the greater part of his resources in the formulation and propagation of his ideology of reform. Deprived of the full attention of Swami Dayanand, the Vedic School system collapsed and the last of the schools (Farrukhabad) was closed down in 1876 due to Muslim takeover.

While traveling (1872–1873), Swami Dayanand came to know of several of the pro-Western Indian intellectuals of the age, including Navin Chandra Roy, Rajnarayan Basu, Debendranath Tagore and Hemendranath Tagore all of whom were actively involved in the Brahmo Samaj. This reform organization, founded in 1828, held many views similar to those of Swami Dayanand in matters both religious (e.g. a belief in monotheism and the eternality of the soul) and social (e.g. the need to abolish the hereditary caste or varna system and uplift the masses through education). Debendranath Tagore had written a book entitled Brahmo Dharma, which serves as a manual of religion and ethics to the members of that society, and Swami Dayanand had read it while in Calcutta.

Although Swami Dayanand was persuaded on more than one occasion to join the Brahmo Samaj, there existed points of contention which the Swami could not overlook, the most important being the position of the Vedas. Swami Dayanand held the Vedas to be divine revelation, and refused to accept any suggestions to the contrary. Despite this difference of opinion, however, it seems that the members of the Brahmo Samaj parted with Swami Dayanand on good terms, the former having publicly praised the latter’s visit to Calcutta in several journals.

The Light of Truth

Swami Dayanand made several changes in his approach to the work of reforming Hindu society after having visited Calcutta. The most significant of these changes was that he began lecturing in Hindi. Prior to his tour of Bengal, the Swami had always held his discourses and debates in Sanskrit. While this gained him a certain degree of respect among both the learned and the common people, it prevented him from spreading his message to the broader masses. The change to Hindi allowed him to attract increasingly larger following, and as a result his ideas of reform began to circulate among the lower classes of society as well.

After hearing some of Swami Dayanand's speeches delivered in Hindi at Varanasi, Raj Jaikishen Das, a native government official there, suggested that the swami publish his ideas in a book so that they might be distributed among the public. Witnessing the slow collapse of the Vedic Schools due to a lack of a clear statement of purpose and the resultant flagging public support, Swami Dayanand recognized the potential contained in Das's suggestion and took immediate action.

From June to September 1874, Swami Dayanand dictated a comprehensive series of lectures to his scribe, Pundit Bhimsen Sharma, which dealt with his views and beliefs regarding a wide range of subjects including God, the Vedas, Dharma, the soul, science, philosophy, childrearing, education, government and the possible future of both India and the world. The resulting manuscript was published under the title Satyarth Prakash or The Light of Meaning of Truth in 1875 at Varanasi. This voluminous work would prove to play a central role in the establishment and later growth of the organization which would come to be known as the Arya Sama

First attempt at a 'New Samaj'

While the manuscript of the Satyarth Prakash was being edited at Varanasi, Swami Dayanand received an invitation to travel to Bombay in order to conduct a debate with some representatives of the Vallabhacharya sect. The Swami arrived in Bombay on the 20th of October, 1874. The debate, though greatly publicized, never materialized. Nonetheless, two members of the Prarthana Samaj approached Swami Dayanand and invited him to deliver a few lectures at one of their gatherings, which were received with appreciation by all those present. The members of the Prarthana Samaj of Bombay recognized in Swami Dayanand an individual in possession of the knowledge and skills necessary for promoting their aims, the greatest and most comprehensive of which being the general uplift of Hindu society at large and its protection from what they perceived to be the advancing threat of Christian and Muslim efforts to convert Hindus.

After his having spent over a month at Bombay, 60 new-found students of Swami Dayanand – among them, prominent members of the Prarthana Samaj – proposed the notion of founding a 'New Samaj' with the Swami’s ideas serving as its spiritual and intellectual basis.

After having received a personal invitation from Gopalrao Hari Deshmukh, Swami Dayanand left Bombay and traveled to Ahmedabad, Gujarat, arriving on the 11th of December, 1874. Once there, he conducted a debate with local pundits on the issue of Vedic authority, and emerged victorious. It is reported that the formation of a Samaj and the founding of a Vedic School at Ahmedabad were proposed following the success of the debate, yet not enough support for such a venture could be mustered.

On an invitation from Hargovind Das Dvarkadas, the secretary of the local Prarthana Samaj, Swami Dayanand travelled to Rajkot, Gujarat, arriving on the 31st of December, 1874. Instead of delivering his standard program of lectures, he allowed members of the audience to choose the topics they would like to have him discourse upon. A total of eight topics were chosen, and Swami Dayanand delivered impromptu lectures on all of them to the satisfaction of all present. Gifts were bestowed upon the swami as tokens of gratitude for his masterly orations, and it was announced that the Rajkot Prarthana Samaj was henceforth dissolved and was ready to be reorganized as a new Samaj under the auspices of Swami Dayanand. The swami, after much deliberation, chose the name ‘Arya Samaj’ or ‘Society of Nobles’. Swami Dayanand drafted a list of 28 rules and regulations for the Rajkot Arya Samaj, which he later had printed for distribution.

On his way back to Bombay, Swami Dayanand stopped off in Ahmedabad and related the news of Rajkot, Gujarat, distributing copies of the rules and regulations to those present. A meeting was held on the 27th of January, 1875 to discuss the proposal of forming an Arya Samaj there, yet no conclusive decision was reached. Unwilling to wait for the deliberations to come to an end, Swami Dayanand continued on his way to Bombay.

While traveling, the swami received word that the still fragile Rajkot Arya Samaj had involved itself in some political dispute that resulted in a government warning issued against it and its members. Thus, the collapse of the just established society was already looming large.

Swami Dayanand reached Bombay/Mumbai on 29 January 1875, and immediately the appeal to establish an Arya Samaj there was renewed. However, the swami did not want a protracted debate to ensue as had occurred at Ahmedabad, bringing with it the possibility of endless deliberations. Thus, a membership drive was initiated which would circumvent the need for discussions. Within a short time, 100 individuals enrolled themselves as prospective members.

While the membership drive was underway, Swami Dayanand held a now famous discourse with the congregation at Mumbai. Someone in the audience asked the Swami, "Should we set up a new Samaj?" Dayanand responded:

On the 10th of April, 1875, the Mumbai Arya Samaj was officially established. The membership amounted to 100 persons, including Swami Dayanand. The members appealed to the swami that he should serve as either the President or the Guru of the Samaj, but he kindly refused, and instead requested that he be listed as a regular member.

ओ३म् O3m (Aum), considered by the Arya Samaj to be the highest and most proper name of God.
Main article: Principles of Arya Samaj

On the 24th of June, 1877, the second major Arya Samaj was established at Lahore. However, the original list of 28 rules and regulations drafted by Dayanand for the Rajkot Arya Samaj and used for the Bombay/Mumbai Arya Samaj were deemed to be too unwieldy. Therefore, it was proposed that the principles should be reduced and simplified, while the bylaws should be removed to a separate document. Everyone present, including Swami Dayanand, agreed, and the 10 Principles of the Arya Samaj, as they are known around the world today, came into existence.

All subsequently established branches of the Arya Samaj have been founded upon the ten principles. However, each new branch of the Society has a degree of freedom in determining the exact by laws under which it shall operate. Everyone who wishes to become a member of the Society must agree to uphold these principles in their entirety. However, nothing beyond these 10 Principles has any binding force on any member of the Arya Samaj. For this reason, the early Samaj proved to be attractive to individuals belonging to various religious communities, and enjoyed a notable degree of converts from segments of the Hindu, Sikh, Christian and Muslim populations of Indian society.

Drawing what are seen to be the logical conclusions from these principles, the Arya Samaj also unequivocally condemns practices such as polytheism, iconolatry, animal sacrifice, ancestor worship, pilgrimage, priestcraft, the belief in Avatars or incarnations of God, the hereditary caste system, untouchability and child marriage on the grounds that all these lack Vedic sanction.