Standard Hindi, or more precisely Modern Standard Hindi, also known as Manak Hindi (Devanagari: मानक हिन्दी), High Hindi, Nagari Hindi, and Literary Hindi, is a standardized and sanskritized register of the Hindustani language derived from the Khariboli dialect of Delhi[not verified in body]. It[not verified in body] is one of the official language of the Republic of India along with English.

Colloquial Hindi is mutually intelligible with another register of Hindustani called Urdu. Mutual intelligibility decreases in literary and specialized contexts which rely on educated vocabulary. Due to religious nationalism and communal tensions, speakers of both Hindi and Urdu frequently assert that they are distinct languages, despite the fact that native speakers generally cannot tell the colloquial languages apart[not verified in body] . The combined population of Hindi-Urdu speakers is the fourth largest in the world.[3] However, the number of native speakers of Standard Hindi is unclear. According to the 2001 Indian census,[4] 258 million people in India reported their native language to be "Hindi". However, this includes large numbers of speakers of Hindi dialects besides Standard Hindi; as of 2009, the best figure Ethnologue could find for Khariboli Hindi was a 1991 citation of 180 million.[1] 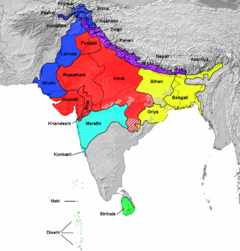 It was envisioned that Hindi would become the sole working language of the central government by 1965 (per directives in Article 344 (2) and Article 351),[6] with state governments being free to function in languages of their own choice. However, widespread resistance movements to the imposition of Hindi on non-native speakers, of especially the people living in south India (such as the Anti-Hindi agitations of Tamil Nadu) led to the passage of the Official Languages Act (1963), which provided for the continued use of English, indefinitely, for all official purposes. Therefore, English is still used in official documents, in courts, etc. However, the constitutional directive to the central government to champion the spread of Hindi was retained and has strongly influenced the policies of the Union government.

The dialect upon which Standard Hindi is based is khariboli, the vernacular of Delhi and the surrounding western Uttar Pradesh and southern Uttarakhand region. This dialect acquired linguistic prestige in the Mughal Empire (17th century) and became known as Urdu, "the language of the court." After independence, the Government of India set about standardising Hindi as a separate language from Urdu, instituting the following conventions:[original research?]

Standard Hindi derives much of its formal and technical vocabulary from Sanskrit. Standard or shuddh ("pure") Hindi is used only in public addresses and radio or TV news, while the everyday spoken language in most areas is one of several varieties of Hindustani[citation needed], whose vocabulary contains many words drawn from Persian and Arabic[citation needed]. In addition, spoken Hindi includes words from English and other languages as well. Hindi is used as the sole official state language in the states of UP, Bihar, Rajasthan, Himachal Pradesh, MP, Chattisgarh, Jharkhand etc. Other states like Punjab, West Bengal, Orissa speak/use Hindi beside of their regional/state language. All over North, Central, East & West Indians use Hindi vastly. However, the literary registers differ substantially in borrowed vocabulary[citation needed]; in highly formal situations, the languages are barely intelligible to speakers of the other[citation needed]. Hindi has looked to Sanskrit for borrowings from at least the 19th century, and Urdu has looked to Persian and Arabic for borrowings from the eighteenth century. On another dimension, Hindi is associated with the Hindu community and Urdu with the Muslim community though this is much more a twentieth century phenomenon when the political impetus to actively distinguish Hindi from Urdu gathered pace amongst the educated Hindus driving this change. Prior to this it was the norm for both educated Hindu and Muslim Indians to be fluent in Urdu.

There are five principal categories of words in Standard Hindi:

Similarly, Urdu treats its own vocabulary, borrowed directly from Persian and Arabic, as a separate category for morphological purposes.

Hindi from which most of the Persian, Arabic and English words have been ousted and replaced by tatsam words is called Shuddha Hindi (pure Hindi). Chiefly, the proponents of Hindutva ideology ("Hindu-ness") are vociferous supporters of Shuddha Hindi.

Excessive use of tatsam words sometimes creates problems for most native speakers. Strictly speaking, the tatsam words are words of Sanskrit and not of Hindi—thus they have complicated consonantal clusters which are not linguistically valid in Hindi. The educated middle class population of India can pronounce these words with ease, but people of rural backgrounds have much difficulty in pronouncing them. Similarly, vocabulary borrowed from Persian and Arabic also brings in its own consonantal clusters and "foreign" sounds, which may again cause difficulty in speaking them.

Medieval Hindi literature is marked by the influence of Bhakti movement and the composition of long, epic poems. It was not written in the current dialect but in other Hindi languages, particularly in Avadhi and Braj Bhasha, but later also in Khariboli. During the British Raj, Hindustani became the prestige dialect. Hindustani with heavily Sanskritized vocabulary or Sahityik Hindi (Literary Hindi) was popularized by the writings of Swami Dayananda Saraswati, Bhartendu Harishchandra and others. The rising numbers of newspapers and magazines made Hindustani popular among the educated people. Chandrakanta, written by Devaki Nandan Khatri, is considered the first authentic work of prose in modern Hindi. The person who brought realism in the Hindi prose literature was Munshi Premchand, who is considered as the most revered figure in the world of Hindi fiction and progressive movement......

The Dwivedi Yug ("Age of Dwivedi") in Hindi literature lasted from 1900 to 1918. It is named after Mahavir Prasad Dwivedi, who played a major role in establishing the Modern Hindi language in poetry and broadening the acceptable subjects of Hindi poetry from the traditional ones of religion and romantic love.

In the 20th century, Hindi literature saw a romantic upsurge. This is known as Chhayavaad (shadowism) and the literary figures belonging to this school are known as Chhayavaadi. Jaishankar Prasad, Suryakant Tripathi 'Nirala', Mahadevi Varma and Sumitranandan Pant, are the four major Chhayavaadi poets.

Uttar Adhunik is the post-modernist period of Hindi literature, marked by a questioning of early trends that copied the West as well as the excessive ornamentation of the Chhayavaadi movement, and by a return to simple language and natural themes.

The following is a sample text in High Hindi, of the Article 1 of the Universal Declaration of Human Rights (by the United Nations):

Article 1 — All human-beings to dignity and rights' matter in from-birth freedom and equality acquired is. Them to reason and conscience's endowment acquired is and always them to brotherhood's spirit with behaviour to do should.

Article 1 — All human beings are born free and equal in dignity, right to do what ever they want and rights. They are endowed with reason and conscience and should act towards one another in a spirit of brotherhood.

Under the Indian government's encouragement, the officially sponsored version of the Khari-boli dialect[citation needed] has undergone a sea-change after it was declared the language of central government functioning in 1950. A major change has been the Sanskritisation of Hindi (introduction of Sanskrit vocabulary in Khariboli). Three factors motivated this conscious bid to sanskritise Hindi, being:

In its non-Sanskritised form, the Khariboli-based dialect is the normal and principal dialect[citation needed] used in the Hindi cinema. It is almost exclusively used in contemporary Hindi television serials, songs, education, and of course, in normal daily speech in almost all the urban regions of north India, wherever Hindi is also the state language[citation needed]. The rural dialect varies from region to region.