Dadabhai Naoroji (4 September 1825 – 30 June 1917) (Hindi: दादाभाई नौरोजी), known as the Grand Old Man of India, was a Parsi intellectual, educator, cotton trader, and an early Indian political leader. His book Poverty and Un-British Rule in India brought attention to the draining of India's wealth into Britain. He was a Member of Parliament (MP) in the British House of Commons between 1892 and 1895, and the first Asian to be a British MP.[1] He is also credited with the founding of the Indian National Congress, along with A.O. Hume and Dinshaw Edulji Wacha.

At the early age of 25, he was appointed leading Professor at the Elphinstone Institution in 1850, becoming the first Indian to hold such an academic position.[2] Being an Athornan (ordained priest), Naoroji founded the Rahnumae Mazdayasne Sabha (Guides on the Mazdayasne Path) on 1 August 1851 to restore the Zoroastrian religion to its original purity and simplicity. In 1854, he also founded a fortnightly publication, the Rast Goftar (or The Truth Teller), to clarify Zoroastrian concepts. By 1855 he was Professor of Mathematics and Natural philosophy in Bombay. He travelled to London in 1855 to become a partner in Cama & Co, opening a Liverpool location for the first Indian company to be established in Britain. Within three years, he had resigned on ethical grounds. In 1859, he established his own cotton trading company, Naoroji & Co.[3] Later, he became professor of Gujarati at University College London. 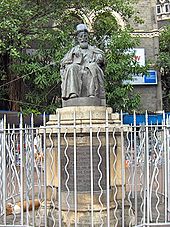 Statue of Naoroji in Bombay

In 1867 Naoroji helped establish the East India Association, one of the predecessor organizations of the Indian National Congress with the aim of putting across the Indian point of view before the British public. The Association was instrumental in counter-acting the propaganda by the Ethnological Society of London which, in its session in 1866, had tried to prove the inferiority of the Asians to the Europeans. This Association soon won the support of eminent Englishmen and was able to exercise considerable influence in the British Parliament. In 1874, he became Prime Minister of Baroda and was a member of the Legislative Council of Bombay (1885–88). He was also a member of the Indian National Association founded by Sir Surendranath Banerjea from Calcutta a few years before the founding of the Indian National Congress in Bombay, with the same objectives and practices. The two groups later merged into the INC, and Naoroji was elected President of the Congress in 1886. Naoroji published Poverty and un-British Rule in India in 1901.

Naoroji moved to Britain once again and continued his political involvement. Elected for the Liberal Party in Finsbury Central at the 1892 general election, he was the first British Indian MP. He refused to take the oath on the Bible as he was not a Christian, but was allowed to take the oath of office in the name of God on his copy of Khordeh Avesta. In Parliament, he spoke on Irish Home Rule and the condition of the Indian people. In his political campaign and duties as an MP, he was assisted by Muhammed Ali Jinnah, the future Muslim nationalist and founder of Pakistan. In 1906, Naoroji was again elected president of the Indian National Congress. Naoroji was a staunch moderate within the Congress, during the phase when opinion in the party was split between the moderates and extremists. Naoroji was a mentor to both Gopal Krishna Gokhale and Mohandas Karamchand Gandhi. He was married to Gulbai at the age of eleven. He died in Bombay on 30 June 1917, at age 92. Today the Dadabhai Naoroji Road, a heritage road of Mumbai, is named after him. Also, the Dadabhoy Naoroji Road in Karachi, Pakistan is also named after him as well as the Naoroji Road in the Bloomsbury area of London.