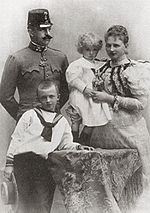 Archduke Otto Franz and his family

On October 2, 1886, he married Princess Maria Josepha of Saxony, daughter of King George of Saxony. They had two sons:

Their marriage was unhappy, however, since the Archduke was often unfaithful. By one Marie Schleinzer he had two children:

He had been in bad health for two years before his death, almost completely withdrawing from public life. He spent his first year of illness in Egypt, but his recovery there proved temporary when he returned to Austria, and he was seriously ill for his last few months.