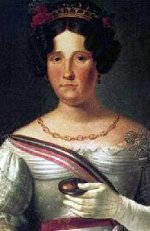 On , , Maria Isabella married her first cousin Prince Francis of Naples and Sicily by proxy in . Francis was the eldest son of Ferdinand III of Sicily/Ferdinand IV of Naples and his first wife . Ferdinand was her paternal uncle, a younger brother of her father.

She was sent to meet her new husband and a second marriage ceremony took place in on , . This time married in person. The bride was thirteen years old and the groom twenty-five. Her mother-in-law, Queen Marie Caroline, wrote about her first impressions of the young Maria Isabella:

On , , her father-in-law Ferdinand I died and Francis succeeded to the throne. Maria Isabella served as his Queen consort. Her husband reportedly took little part in the government, which he left in the hands of favourites and police officials, and lived with his mistresses, surrounded by soldiers, ever in dread of assassination. He died on , .

Maria Isabella remained a widow for nine years. On , , Maria Isabella married her second husband (1805 - 1882). The bride was fifty years old and the groom thirty-four.

* [http://www.geocities.com/henrivanoene/genspain.html#mariaisabel A Genealogy of the Royal Family of Spain]