Francis I of the Two Sicilies

Francis I of the Two Sicilies 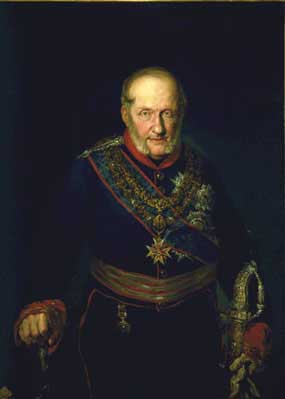 Francis was born in , the son of and his wife Archduchess . He was also the nephew of and Louis XVI the last King and Queen of France before the first .

In 1796 Francis married , daughter of the Holy Roman Emperor Leopold II. When she died, he married his first cousin María Isabel, daughter of King .

After the Bourbon family fled from Naples to in 1806, and , the British resident, had established a constitution and deprived Ferdinand of all power, Francis was appointed regent (1812).

On the fall of his father returned to Naples and suppressed the Sicilian constitution and autonomy, incorporating his two kingdoms into that of the Two Sicilies (1816); Francis then assumed the revived title of duke of . While still heir apparent he professed liberal ideas, and on the outbreak of the revolution of 1820 he accepted the regency apparently in a friendly spirit towards the new constitution. But he was probably more conservatively inclined than that.

Hence, on succeeding to the throne in 1825, he followed more conservative principles as well. He took little part in the government, which he left in the hands of favourites and police officials, and lived with his mistresses, surrounded by soldiers, ever in dread of assassination. During his reign the only revolutionary movement was the outbreak on the Cilento (1828), repressed by the marquis Delcarretto, an ex-Liberal. He was, however successful in having the Austrian occupation force withdrawn (1827) therefore relieving a large financial burden on the Treasury.

During his reign, the was founded to reward civil merit.

With Maria Clementina of Austria:

With Isabella of Spain:

Also had illegitimate children with his mistresses.