The Brahmic or Indic scripts are a family of abugida (alphabetic-syllabary) writing systems. They are used throughout South Asia (incuding Pakistan and Afghanistan), Southeast Asia, and parts of Central and East Asia, and are descended from the Brāhmī script of the ancient Indian subcontinent. They are used by languages of several language families: Indo-European, Dravidian, Tibeto-Burman, Mongolic[example needed], Austro-Asiatic, Austronesian, Tai, and possibly influenced Korean (hangul). They were also the source of the dictionary order of Japanese kana. 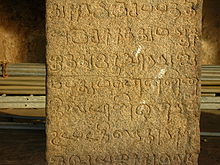 An inscription in Old Tamil script (Vatteluttu) from the Later Chola period, circa 11th century AD. Old Tamil is a direct descendant of the Brahmi writing system

Brahmic scripts are descended from the Brahmi script. Brahmi is clearly attested from the 3rd century BC during the reign of Ashoka, who used the script for imperial edicts, but there are some recent finds of earlier epigraphy in Tamil-Brahmi writing found on pottery in South India and Sri Lanka, dating back to the 6th century BCE or even earlier[dubious – discuss]. Northern Brahmi gave rise to the Gupta script during the Gupta period, which in turn diversified into a number of cursives during the Middle Ages, including Siddham, Sharada and Nagari.

The Siddham script was especially important in Buddhism, as many sutras were written in it. The art of Siddham calligraphy survives today in Japan. The syllabic nature and dictionary order of the modern kana system of Japanese writing is believed to be descended from the Indic scripts, most likely through the spread of Buddhism.[1]

Southern Brahmi evolved into Grantha and Old-Kannada Scripts among others, which in turn diversified into numerous scripts of Southeast Asia.

Bhattiprolu was a great centre of Buddhism during 3rd century BCE and from where Buddhism spread to east Asia. The present Telugu script is derived from Bhattiprolu Script or 'Kannada-Telugu script', also known as 'old Kannada script', owing to its similarity to the same.[2][3]

Initially, minor changes were made which is now called Tamil brahmi which has far fewer letters than some of the other Indic scripts as it has no separate aspirated or voiced consonants. Later under the influence of Granta vetteluthu evolved which looks similar to present day Malayalam script. Still further changes were made in 19th and 20th centuries to make use of printing and typewriting needs before we have the present script.

Gari Ledyard has hypothesized that the hangul script used to write Korean is based on the Mongol 'Phags-pa script, a descendant of the Brahmic family via Tibetan. 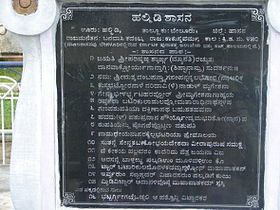 Some characteristics, which may not be present in all the scripts, are:

Below are comparison charts of several of the major Indic scripts; transliteration is indicated in ISO 15919; pronunciation is indicated in International Phonetic Alphabet (IPA). Pronunciation is taken from Sanskrit where possible, but other languages where necessary. These lists are not comprehensive; some glyphs are unrepresented. Some pronunciations may be inaccurate or different from the ones listed, partly because the graphemically corresponding glyphs listed in the same column are not necessarily phonetically identical.

Note: Glyphs for r̥̄, l̥, l̥̄ and a few other glyphs are obsolete or very rarely used.

The Brahmi script was already divided into regional variants at the time of the earliest surviving epigraphy around the 3rd century BCE. Cursives of the Brahmi script began to diversify further from around the 5th century CE and continued to give rise to new scripts throughout the Middle Ages. The main division in antiquity was between northern and southern Brahmi. In the northern group, the Gupta script was very influential, and in the southern group the Grantha and Old-Kannada Scripts with the spread of Hinduism spread Brahmic scripts throughout Southeast Asia.