Demotic (from Greek: δημοτικός dēmotikós, "popular") refers to either the ancient Egyptian script derived from northern forms of hieratic used in the Delta, or the stage of the Egyptian language following Late Egyptian and preceding Coptic. The term was first used by the Greek historian Herodotus to distinguish it from hieratic and hieroglyphic scripts. By convention, the word "Demotic" is capitalized in order to distinguish it from demotic Greek.

The Demotic script was referred to by the Egyptians as sš n šˤ.t "document writing," which the 2nd century scholar Clement of Alexandria called ἐπιστολογραφική (epistolographikē) "letter writing," while early Western scholars, notably Thomas Young, formerly referred to it as 'Enchorial Egyptian'. The script was used for more than a thousand years, and during that time a number of developmental stages occurred.

Early Demotic (often referred to by the German term Frühdemotisch) developed in Lower Egypt during the later part of the 25th dynasty, particularly on stelae from the Serapeum at Saqqara. It is generally dated between 650 and 400 BC as most texts written in Early Demotic are dated to the 26th dynasty and the following Persian period (the 27th dynasty). After the reunification of Egypt under Psametik I, Demotic replaced Abnormal Hieratic in Upper Egypt, particularly during the reign of Amasis when it became the official administrative and legal script. During this period, Demotic was used only for administrative, legal, and commercial texts, while hieroglyphs and hieratic were reserved for other texts. 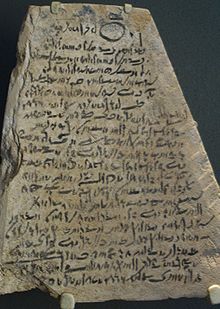 Ostracon with Demotic inscription. Ptolemaic dynasty, c. 305-30 BC. Probably from Thebes. It is a prayer to the god Amun to heal a man's blindness.

Middle Demotic (c. 400–30 BC) is the stage of writing used during the Ptolemaic Period. From the 4th century BC onwards, Demotic held a higher status, as may be seen from its increasing use for literary and religious texts. By the end of the 3rd century BC, Greek was more important as it was the administrative language of the country; Demotic contracts lost most of their legal force unless there was a note in Greek of being registered with the authorities.

From the beginning of Roman rule of Egypt, Demotic was progressively less used in public life. There are, however, a number of literary texts written in Late Demotic (c. 30 BC–452 AD), especially from the 1st and 2nd centuries AD, though the quantity of all Demotic texts decreased rapidly towards the end of the 2nd century. In contrast to the way Latin eliminated minority languages in the western part of the Empire and the expansion of Greek led to the extinction of Phrygian, Greek did not replace Demotic entirely.[1] After that, Demotic was only used for a few ostraca, subscriptions to Greek texts, mummy labels, and graffiti. The last dated example of the Demotic script is dated to December 11, AD. 452, and consists of a graffito on the walls of the temple of Isis on Philae.

Demotic is a development of Late Egyptian and shares much with the later Coptic phase of the Egyptian language. In the earlier stages of Demotic, such as those texts written in the Early Demotic script, it probably represented the spoken idiom of the time. But, as it was increasingly used for only literary and religious purposes, the written language diverged more and more from the spoken form, giving Late Demotic texts an artificial character, similar to the use of classical Middle Egyptian during the Ptolemaic Period.

Demotic is the second script inscribed on the Rosetta Stone. There are 32 lines of Demotic script on the Rosetta Stone. Demotic was deciphered before the hieroglyphic script, starting with the efforts of Silvestre de Sacy. The Rosetta Stone was discovered in 1799. It was inscribed in classical Greek and Egyptian (demotic and hieroglyphic). By comparing the Greek words, which could be translated, and the Egyptian hieroglyphs, in addition to their knowledge of Coptic, scholars were able to translate Egyptian glyphs. Egyptologists, linguists and papyrologists specializing in the study of the Demotic script and stage of Egyptian are known as Demotists.