Assamese (অসমীয়া Ôxômiya) (IPA: [ɔxɔmija]) is the easternmost Indo-Aryan language. It is used mainly in the state of Assam in North-East India. It is also the official language of Assam. It is also spoken in parts of Arunachal Pradesh and other northeast Indian states. Nagamese, an Assamese-based Creole language is widely used in Nagaland and parts of Assam. Small pockets of Assamese speakers can be found in Bhutan. The easternmost of Indo-European languages, it is spoken by over 13 million people.[2]

Assamese has derived its phonetic character set and its behaviour from Sanskrit. It is written using the Assamese script. Assamese is written from left to right and top to bottom, in the same manner as English. A large number of ligatures are possible since potentially all the consonants can combine with one another. Vowels can either be independent or dependent upon a consonant or a consonant cluster.

The English word "Assamese" is built on the same principle as "Japanese", "Taiwanese", etc. It is based on the name "Assam" by which the tract consisting of the Brahmaputra valley was known. The people call their state Ôxôm and their language Ôxômiya. 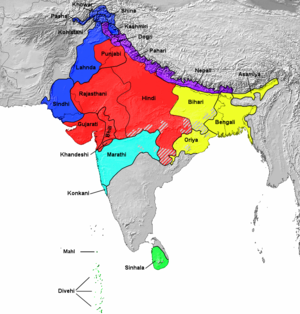 Assamese and the cognate languages, Maithili, Bengali and Oriya, developed from Magadhi Prakrit.[3] According to linguist Suniti Kumar Chatterji, the Magadhi Prakrit in the east gave rise to four Apabhramsa dialects: Radha, Vanga, Varendra and Kamarupa; and the Kamarupa Apabhramsa, keeping to the north of the Ganges, gave rise to the North Bengal dialects in West Bengal and Assamese in the Brahmaputra valley.[4] Though early compositions in Assamese exist from the thirteenth century, the earliest relics of the language can be found in paleographic records of the Kamarupa Kingdom from the fifth century to the twelfth century.[5] Assamese language features have been discovered in the ninth century Charyapada, which are Buddhist verses discovered in 1907 in Nepal, and which came from the end of the Apabhramsa period. Early compositions matured in the fourteenth century, during the reign of the Kamata king Durlabhnarayana of the Khen dynasty, when Madhav Kandali composed the Kotha Ramayana. Since the time of the Charyapada, Assamese has been influenced by the languages belonging to the Sino-Tibetan and Austroasiatic families.

Assamese became the court language in the Ahom kingdom by the seventeenth century.[6]

Assamese uses the Assamese script, a variant of the Eastern Nagari script, which traces its descent from the Gupta script. It resembles very closely to the Mithilakshar script of the Maithili language as well as to the Bengali script.[7] There is a strong tradition of writing from early times. Examples can be seen in edicts, land grants and copper plates of medieval kings. Assam had its own system of writing on the bark of the saanchi tree in which religious texts and chronicles were written. The present-day spellings in Assamese are not necessarily phonetic. Hemkosh, the second Assamese dictionary, introduced spellings based on Sanskrit which are now the standard.

The Assamese language has the following characteristic morphological features[8]

The Assamese phonemic inventory consists of eight oral vowel phonemes, three nasalized vowel phonemes, fifteen diphthongs (two nasalized diphthongs) and twenty-one consonant phonemes.[9] For a consistent phonemic representation of the Assamese language, all English-language Wikipedia articles that include words in Assamese will use the Romanization scheme.

The Assamese phoneme inventory is unique in the Indic group of languages in its lack of a dental-retroflex distinction in coronal stops. Historically, the dental stops and retroflex stops both merged into alveolar stops. This makes Assamese resemble non-Indic languages in its use of the coronal major place of articulation. The only other language to have fronted retroflex stops into alveolars is the closely related eastern dialects of Bengali (although a contrast with dental stops remains in those dialects).

Unlike most eastern Indic languages, Assamese is also noted for the presence of the voiceless velar fricative x,(x, IITG, pronounced by a native speaker) historically derived from what used to be coronal sibilants. The derivation of the velar fricative from the coronal sibilant [s] is evident in the name of the language in Assamese; some Assamese prefer to write Oxomiya/Ôxômiya instead of Asomiya/Asamiya to reflect the sound, represented by [x] in the International Phonetic Alphabet. This sound appeared in the phonology of Assamese as a result of lenition of the three Sanskrit sibilants. It is present in other nearby languages, like Chittagonian.

Assamese and Bengali, in contrast to other Indo-Aryan languages, use the velar nasal (the English ng in sing) extensively. In many languages the velar nasal is always attached to a homorganic sound, whereas in Assamese it can occur intervocalically.[10]

Eastern Indic languages like Assamese, Bengali, Sylheti, and Oriya do not have a vowel length distinction, but have a wide set of back rounded vowels. In the case of Assamese, there are four back rounded vowels, including ô [ɔ], o [o], û [ʊ], and u [u]. These four vowels contrast phonemically, as demonstrated by the minimal set কলা kôla [kɔla] 'deaf', ক'লা kola [kola] 'black', কোলা kûla [kʊla] 'lap', and কুলা kula [kula] 'winnowing fan'.

The high-mid back rounded vowel ও û [ʊ] is unique in this branch of the language family, and sounds very much to foreigners as something between অ' o [o] and উ u [u]. This vowel is found in Assamese words such as পোত pût [pʊt] "to bury".

In the middle of the nineteenth century the dialect spoken in the Sibsagar area came into focus because it was made the official language of the state by the British and because the Christian missionaries based their work in this region. The Assamese taught in schools and used in newspapers today has evolved and incorporated elements from different dialects of the language. Banikanta Kakati identified two dialects which he named (1) Eastern and (2) Western dialects. However, recent linguistic studies have identified four dialect groups [2] (Moral 1992[11]), listed below from east to west:

There is a growing and strong body of literature in this language. The first characteristics of this language are seen in the Charyapadas composed in the eighth-12th century. The first examples emerge in writings of court poets in the fourteenth century, the finest example of which is Madhav Kandali's Kotha Ramayana, as well as popular ballad in the form of Ojapali. The sixteenth—17th century saw a flourishing of Vaishnavite literature, leading up to the emergence of modern forms of literature in the late nineteenth century.