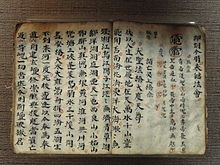 [1]) is a Zhuang word that means "immature character". The Zhuang word for Hanzi used in the Chinese language is "sawgun"(Sawndip:

倱[1]; lit. "original writing system") (saw meaning character or book, and gun meaning the Han Chinese ethnicity, cognate to 漢), whilst "sawndip" refers to the characters used exclusively in the Zhuang language. Though it is not clear when they were created, the oldest known record of these logograms is a stele built in 689, during the Tang dynasty.[citation needed] These logograms were used earlier than the Vietnamese Chữ Nôm.[2]

They have been used for over 1300 years by Zhuang singers and shamans to record poems and scriptures. Though the romanized script for the Zhuang language was created in 1957 as the official script, Sawndip continues to be used to this day. Since the Tang Dynasty to this modern day, sawndip has been used to write texts such as poems, scriptures, folktales, myths, songs, play scripts, medical prescriptions, family genealogies and contracts; during the Cultural Revolution even communist revolutionary propaganda has been written using sawndip.[3]

Following the promotion of romanized Zhuang scripts, literacy amongst Zhuang speakers has increased, however there are major phonetic and lexical differences between Zhuang dialects, and the Latin-based system is based on the Wuming dialect; as a result, there still are Zhuang speakers that prefer to write Zhuang using sawndip.[3]

These three Zhuang logograms from the Sawndip Sawdenj (the first two of which are presently not supported in Unicode) are formed as follows: the components 力,六 and 必 respectively indicate the sound, and the components 子,鳥 and 鳥 indicate the meaning. "Lwg roegbit", literally "child bird-duck", means "wild duckling".

According to Zhāng Yuánshēng (张元生), non-Chinese characters usually make up about 20% of Sawndip texts, although some texts may be composed almost entirely of Chinese characters[5]. Some of these logograms are used in the Chinese names for places in Guangxi, such as 岜 bya meaning mountain or 崬 ndoeng meaning forest, and are therefore included in Chinese dictionaries, and hence also in Chinese character sets.

So far the only Zhuang square characters encoded in Unicode are ideograms that are also present in non-Zhuang character sets, which means that thousands of common Zhuang characters have yet to be encoded.

Sawndip is made up of a combination of Chinese characters, Chinese-like characters, and other symbols. Sawndip consists of a large number of allographs, with some morphosyllables having more than a dozen associated variant glyphs.[3]

Sawndip characters can be categorized using a more complex system than the six traditional classification principles:[3]

From Article 1 of the Universal Declaration of Human Rights: