/ˌɑːbuːˈɡiːdə/ (from Ge‘ez አቡጊዳ ’äbugida), also called an alphasyllabary, is a segmental writing system in which consonant–vowel sequences are written as a unit: each unit is based on a consonant letter, and vowel notation is obligatory but secondary. This contrasts with a full alphabet, in which vowels have status equal to consonants, and with an abjad, in which vowel marking is absent or optional. (In less formal treatments, all three systems are commonly called alphabets.) Abugidas include the extensive Brahmic family of scripts of South and Southeast Asia.

The term abugida was suggested by Peter T. Daniels in his 1990 typology of writing systems.[1] It is an Ethiopian name of the Ge‘ez script, ’ä bu gi da, taken from four letters of that script the way abecedary derives from Latin a be ce de. As Daniels used the word, an abugida contrasts with a syllabary, where letters with shared consonants or vowels show no particular resemblance to each another, and with an alphabet proper, where independent letters are used to denote both consonants and vowels. The term alphasyllabary was suggested for the Indic scripts in 1997 by William Bright, following South Asian linguistic usage, to convey the idea that "they share features of both alphabet and syllabary".[2][3]

Abugidas were long considered to be syllabaries or intermediate between syllabaries and alphabets, and the term "syllabics" is retained in the name of Canadian Aboriginal Syllabics. Other terms that have been used include neosyllabary (Février 1959), pseudo-alphabet (Householder 1959), semisyllabary (Diringer 1968; a word which has other uses) and syllabic alphabet (Coulmas 1996; this term is also a synonym for syllabary).[3]

In general, a letter of an abugida transcribes a consonant. Letters are written as a linear sequence, in most cases left to right. Vowels are written through modification of these consonant letters, either by means of diacritics (which may not follow the direction of writing the letters) or by changes in the form of the letter itself.

There are three principal families of abugidas, depending on whether vowels are indicated by modifying consonants by diacritics, distortion, or orientation.[4]

Tāna of the Maldives has dependent vowels and a zero vowel sign, but no inherent vowel.

Indic scripts originated in India and spread to Southeast Asia. All surviving Indic scripts are descendants of the Brahmi alphabet. Today they are used in most languages of South Asia (although replaced by Perso-Arabic in Urdu, Kashmiri and some other languages of Pakistan and India) and mainland Southeast Asia (Burma, Thailand, Laos, Cambodia; but not Malaysia or Vietnam). The primary division is into North Indic scripts used in Northern India, Nepal, Tibet, Bhutan and Southern Indic scripts used in South India, Sri Lanka, and Southeast Asia. South Indic letter forms are very rounded; North Indic less so, though Oriya, Golmol and Litumol of Nepal script are rounded.

The most populous Indic script is Devanagari, used for Hindi, Bhojpuri, Marathi, Nepali, and often Sanskrit. A basic letter such as क represents a syllable with the default vowel, in this case ka ([kə]), or, in final position, a final consonant, in this case k. This inherent vowel may be changed by adding vowel marks (diacritics), producing syllables such as कि ki, कु ku, के ke, को ko. The mora a consonant letter represents, either with or without a marked vowel, is called an akshara. 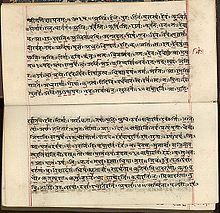 A 19th century manuscript in the Devanagari script

In many of the Brahmic scripts, a syllable beginning with a cluster is treated as a single character for purposes of vowel marking, so a vowel marker like ि -i, falling before the character it modifies, may appear several positions before the place where it is pronounced. For example, the game cricket in Hindi is क्रिकेट krikeţ; the diacritic for /i/ appears before the consonant cluster /kr/, not before the /r/. A more unusual example is seen in the Batak alphabet: Here the syllable bim is written ba-ma-i-(virama). That is, the vowel diacritic and virama are both written after the consonants for the whole syllable.

In many abugidas, there is also a diacritic to suppress the inherent vowel, yielding the bare consonant. In Devanagari, क् is k, and ल् is l. This is called the virama in Sanskrit, or halant in Hindi. It may be used to form consonant clusters, or to indicate that a consonant occurs at the end of a word. For writing two consonants without a vowel in between, instead of using diacritics on the first consonant to remove its vowel, another popular method of special conjunct forms is used in which two or more consonant characters are merged to express a cluster, such as Devanagari: क्ल kla. (Note that on some fonts display this as क् followed by ल, rather than forming a conjunct. This expedient is used by ISCII and South Asian scripts of Unicode.) Thus a closed syllable such as kal requires two akshara to write.

The Róng script used for the Lepcha language goes further than other Indic abugidas, in that a single akshara can represent a closed syllable: Not only the vowel, but any final consonant is indicated by a diacritic. For example, the syllable [sok] would be written as something like s̥̽, here with an underring representing /o/ and an overcross representing the diacritic for final /k/. Most other Indic abugidas can only indicate a very limited set of final consonants with diacritics, such as /ŋ/ or /r/, if they can indicate any at all. 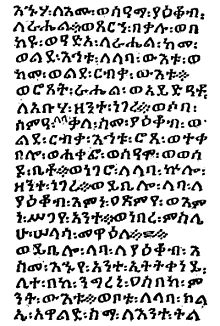 The Ge'ez script, an abugida of Eritrea and Ethiopia

In Ethiopic, where the term abugida originates, the diacritics have been fused to the consonants to the point that they must be considered modifications of the form of the letters. Children learn each modification separately, as in a syllabary; nonetheless, the graphic similarities between syllables with the same consonant is readily apparent, unlike the case in a true syllabary.

Though now an abugida, the Ge'ez alphabet, until the advent of Christianity (ca. 350 CE), had originally been what would now be termed an abjad. In the Ge'ez abugida (or 'fidel'), the base form of the letter (also known as 'fidel') may be altered. For example, ሀ hä [hə] (base form), ሁ hu (with a right-side diacritic that doesn't alter the letter), ሂ hi (with a subdiacritic that compresses the consonant, so it is the same height), ህ hə [hɨ] or [h] (where the letter is modified with a kink in the left arm).

In the family known as Canadian Aboriginal syllabics, vowels are indicated by changing the orientation of the akshara. Each vowel has a consistent orientation; for example, Inuktitut ᐱ pi, ᐳ pu, ᐸ pa; ᑎ ti, ᑐ tu, ᑕ ta. Although there is a vowel inherent in each, all rotations have equal status and none can be identified as basic. Bare consonants are indicated either by separate diacritics, or by superscript versions of the aksharas; there is no vowel-killer mark.

Consonantal scripts ("abjads") are normally written without indication of many vowels. However in some contexts like teaching materials or scriptures, Arabic and Hebrew are written with full indication of vowels via diacritic marks (harakat, niqqud) making them effectively abugidas. The Brahmic and Ethiopic families are thought to have originated from the Semitic abjads by the addition of vowel marks.

The Arabic-alphabet scripts used for Kurdish in Iraq and for Uighur in Xinjiang, People's Republic of China) are fully voweled, but since the vowels are full letters rather than diacritics, and there are no inherent vowels, these are considered alphabets rather than abugidas.

The imperial Mongol script called Phagspa was derived from the Tibetan abugida, but all vowels are written in-line rather than as diacritics. However, it retains the features of having an inherent vowel /a/ and having distinct initial vowel letters.

Pahawh Hmong is a non-segmental script that indicates syllable onsets and rimes, such as consonant clusters and vowels with final consonants. Thus it is not segmental and cannot be considered an abugida. However, it superficially resembles an abugida with the roles of consonant and vowel reversed. Most syllables are written with two letters in the order rime–onset (typically vowel-consonant), even though they are pronounced as onset-rime (consonant-vowel), rather like the position of the /i/ vowel in Devanagari, which is written before the consonant. Pahawh is also unusual in that, while an inherent rime /āu/ (with mid tone) is unwritten, it also has an inherent onset /k/. For the syllable /kau/, which requires one or the other of the inherent sounds to be overt, it is /au/ that is written. Thus it is the rime (vowel) which is basic to the system.

It is difficult to draw a dividing line between abugidas and other segmental scripts. For example, the Meroitic script of ancient Sudan did not indicate an inherent a (one symbol stood for both m and ma, for example), and is thus similar to Brahmic family abugidas. However, the other vowels were indicated with full letters, not diacritics or modification, so the system was essentially an alphabet that did not bother to write the most common vowel.

Several systems of shorthand use diacritics for vowels, but they do not have an inherent vowel, and are thus more similar to Thaana and Kurdish script than to the Brahmic scripts. The Gabelsberger shorthand system and its derivatives modify the following consonant to represent vowels. The Pollard script, which was based on shorthand, also uses diacritics for vowels; the placements of the vowel relative to the consonant indicates tone. Pitman shorthand uses straight strokes and quarter-circle marks in different orientations as the principal "alphabet" of consonants; vowels are shown as light and heavy dots, dashes and other marks in one of 3 possible positions to indicate the various vowel-sounds. However, to increase writing-speed Pitman has rules for "vowel indication" using the positioning or choice of consonant signs so that writing vowel-marks can be dispensed with.

As the term alphasyllabary suggests, abugidas have been considered an intermediate step between alphabets and syllabaries. Historically, abugidas appear to have evolved from abjads (vowelless alphabets). They contrast with syllabaries, where there is a distinct symbol for each syllable or consonant-vowel combination, and where these have no systematic similarity to each other, and typically develop directly from logographic scripts. Compare the Devanagari examples above to sets of syllables in the Japanese hiragana syllabary: か ka, き ki, く ku, け ke, こ ko have nothing in common to indicate k; while ら ra, り ri, る ru, れ re, ろ ro have neither anything in common for r, nor anything to indicate that they have the same vowels as the k set.

Most Indian and Indochinese abugidas appear to have first been developed from abjads with the Kharoṣṭhī and Brāhmī scripts; the abjad in question is usually considered to be the Aramaic one, but while the link between Aramaic and Kharosthi is more or less undisputed, this is not the case with Brahmi. The Kharosthi family does not survive today, but Brahmi's descendants include most of the modern scripts of South and Southeast Asia. Ge'ez derived from a different abjad, the Sabean script of Yemen; the advent of vowels coincided with the introduction of Christianity about 350 CE.[5]

Other types of writing systems

Comparison of various abugidas descended from Brahmi script. May Śiva bless those who take delight in the language of the gods. (Kalidasa)