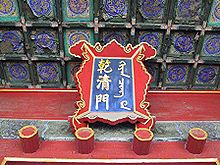 Chinese (left) and Manchu (right) writing in the Forbidden City

The Manchu alphabet was used for recording the now near-extinct Manchu language; a similar script is used today by the Xibe people, who speak a language descended from Manchu. It is written vertically from top to bottom, with columns proceeding from left to right.

According to the Veritable Records (Manchu:

manju-i yargiyan kooli; Chinese: 滿洲實錄; pinyin: Mǎnzhōu Shílù), in 1599 the Manchu leader Nurhaci decided to convert the Mongolian alphabet to make it suitable for the Manchu people. He decried the fact that while illiterate Han Chinese and Mongolians could understand their respective languages when read aloud, that was not the case for the Manchus, whose documents were recorded by Mongolian scribes. Overriding the objections of two advisors named Erdeni and G'ag'ai, he is credited with adapting the Mongolian script to Manchu. The resulting script was known as tongki fuka akū hergen ("script without dots and circles").

In 1632, Dahai added diacritical marks to clear up a lot of the ambiguity present in the original Mongolian script; for instance, a leading k, g, and h are distinguished by the placement of no diacritical mark, a dot, and a circle respectively. This revision created the Standard script, known as tongki fuka sindaha hergen ("script with dots and circles"). As a result, the Manchu alphabet contains little ambiguity. Recently discovered manuscripts from the 1620s make clear, however, that the addition of dots and circles to Manchu script began before their supposed introduction by Dahai.

The Manchu alphabet has two kinds of punctuation: two dots, analogous to a period; and one dot, analogous to a comma. However, with the exception of lists of nouns being reliably punctuated by single dots, punctuation in Manchu is inconsistent, and therefore not of much use as an aid to readability. [7]