Mexican people (Spanish: Pueblo mexicano (collective), Mexicanos (individuals)) refers to all persons from Mexico, a multiethnic country in North America, and/or who identify with the Mexican cultural and/or national identity.

Mexico became a nation in 1821 when Mexico achieved independence from the Spanish Empire; this began the process of forging a Mexican national identity that fused the cultural traits of indigenous pre-Columbian origin with those of European, particularly Iberian, ancestry. This led to what has been termed "a peculiar form of multi-ethnic nationalism"[16]

The most spoken language by Mexicans is Mexican Spanish, but many also speak languages from 62 different indigenous linguistic groups and other languages brought to Mexico by recent immigration or learned by Mexican immigrants residing in other nations. Over 78% of the Mexican people live in Mexico but there is a sizable diaspora with nearly 22% living in the United States.

The Mexican people have varied origins and an identity that has evolved with the succession of conquests among Amerindian groups and by Europeans. The area that is now modern-day Mexico has cradled many predecessor civilizations, going back as far as the Olmec which influenced the latter civilizations of Teotihuacan (200 B.C. to 700 A.D.) and the much debated Toltec people who flourished around the 10th and 12th centuries A.D., and ending with the last great indigenous civilization before the Spanish Conquest, the Aztecs (March 13, 1325 to August 13, 1521). The Nahuatl language was a common tongue in the region of modern Central Mexico during the Aztec Empire, but after the arrival of Europeans the common language of the region became Spanish.

After the conquest of the Aztec empire, the Spanish re-administered the land and expanded their own empire beyond the former boundaries of the Aztec, adding more territory to the Mexican sphere of influence which remained under the Spanish Crown for 300 years. Cultural diffusion and intermixing among the Amerindian populations with the European created the modern Mexican identity which is a mixture of regional indigenous and European cultures that evolved into a national culture during the Spanish Colonial period. This new identity was defined as "Mexican" shortly after the Mexican War of Independence and was more invigorated and developed after the Mexican Revolution when the Constitution of 1917 officially established Mexico as an indivisible pluricultural nation founded on its indigenous roots.

Mexicano (Mexican) is derived from the word Mexico itself. In the principal model to create demonyms in Spanish, the suffix -ano is added to the name of the place of origin. The term Mexicano as a word to describe the different peoples of the region of Mexico as a single group emerged in the 16th century. In that time the term did not apply to a nationality nor to the geographical limits of the modern Mexican Republic. The term was used for the first time in the first document printed in Barcelona in 1566 which documented the expedition which launched from the port in Acapulco to find the best route which would favor a return journey from the Spanish East Indies to New Spain. The document stated: "el venturoso descubrimiento que los Mexicanos han hecho" (the venturous discovery that the Mexicans have made). That discovery led to the Manila galleon trade route and those "Mexicans" referred to Criollos, Mestizos and Amerindians alluding to a plurality of persons who participated for a common end: the conquest of the Philippines in 1565. (Gómez M., et al. 56) 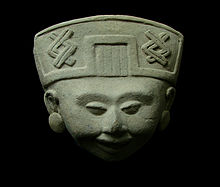 Totonac face with a smile and closed eyes. 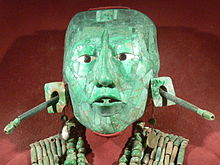 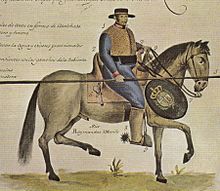 A drawing of a cavalryman in New Spain (Mexico) 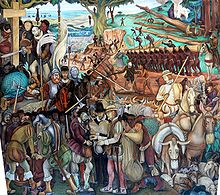 The Mexican Government asked Mexicans about their perception of their own racial heritage. In the 1921 census, residents of the Mexican Republic were asked if they fell into one of the following categories:[17]

This was the last Mexican Census which asked people to self-identify themselves with a racial group.

Ethnic relations in modern Mexico have grown out of the historical context of the arrival of Europeans, the subsequent colonial period of cultural and genetic miscegenation within the frame work of the castas system, the revolutionary periods focus on incorporating all ethnic and racial group into a common Mexican national identity and the indigenous revival of the late 20th century. The resulting picture has been called ""a peculiar form of multi-ethnic nationalism".[16]

Very generally speaking ethnic relations can be arranged on an axis between the two extremes of European and Amerindian cultural heritage, this is a remnant of the colonial Spanish caste system which categorized individuals according to their perceived level of biological mixture between the two groups. Additionally the presence of considerable portions of the population with partly African and Asian heritage further complicates the situation. Even though it still arranges persons along the line between indigenous and European, in practice the classificatory system is no longer biologically based, but rather mixes socio-cultural traits with phenotypical traits, and classification is largely fluid, allowing individuals to move between categories and define their ethnic and racial identities situationally.[19][20]

The large majority of Mexicans can be considered as "Mestizos", meaning that they neither identify fully with any indigenous culture or with a particular non-Mexican heritage, but rather identify as having cultural traits and heritage that is mixed by elements from indigenous and European traditions. By the deliberate efforts of post-revolutionary governments the "Mestizo identity" was constructed as the base of the modern Mexican national identity, through a process of cultural synthesis referred to as mestizaje. Mexican politicians and reformers such as José Vasconcelos and Manuel Gamio were instrumental in building a Mexican national identity on the concept of mestizaje.[21][22]

The category of "indigena" (indigenous) can be defined narrowly according to linguistic criteria including only persons that speak one of Mexico's 62 indigenous languages, this is the categorization used by the National Mexican Institute of Statistics. It can also be defined broadly to include all persons who selfidentify as having an indigenous cultural background, whether or not they speak the language of the indigenous group they identify with. This means that the percentage of the Mexican population defined as "indigenous" varies according to the definition applied, cultural activists have referred to the usage of the narrow definition of the term for census purposes as "statistical genocide".[23][24]

The term "Mestizo" is not in wide use in Mexican society today and has been dropped as a category in population censuses, it is however still used in social and culural studies when referring to the non-indigenous part of the Mexican population. The word has somewhat pejorative connotations and most of the Mexican citizens who would be defined as mestizos in the sociological literature would probably self-identify primarily as Mexicans. In the Yucatán peninsula the word Mestizo is even used about Maya speaking populations living in traditional communities, because during the caste war of the lat 19th century those Maya who did not join the rebellion were classified as mestizos.[25] In Chiapas the word "Ladino" is used instead of mestizo.[26]

As suggested by history and consistent with Mexican's self-image, genetic studies have found the Mexican population to be of mainly Amerindian and European ancestry.[28] Most researches have also found a small African contribution.

According to a paper presented by the American Society of Human Genetics Mexicans were found to be 58.96% European, 36.05% "Asian" (Amerindian), and 5.03% African. Sonora shows the highest European contribution (70.63%) and Guerrero the lowest (51.98%). In Guerrero one also observes the highest Asian contribution (37.17%). African contribution ranges from 2.8% in Sonora to 11.13% in Veracruz. 80% of the Mexican population was classed as mestizo (meaning being racially mixed in some degree).

Another study,[29] one focusing on the general population in five Latin American nations — Colombia, Dominican Republic, Ecuador, Mexico, and Puerto Rico, — estimated that about half (50.1%) of Mexican ancestry was of Amerindian origin; 44.3%, European; and 5.6%, African. Compared to the other Latin American countries, Mexico was found to have the smallest amount of African admixture and the second largest amount of Amerindian ancestry, topped by Ecuador.

A paper[30] specifically focusing on Mexican mestizos, has found them to be mostly Amerindian (55.2%) but also having a large amount of European admixture (41.8%). African ancestry was found to be 1.8% and East Asian ancestry, 1.2%. The samples were drawn from six Mexican cities: Sonora and Zacatecas (ZAC) in the north, Guanajuato in the center, Guerrero in the center–Pacific, Veracruz in the center–Gulf, and Yucatan in the southeast. As to reginal differences, it was found that Guerrero had the largest degree of both Amerindian and African admixture (66% and 4.1% respectively), and Sonora, the largest degree of European ancestry (61.6%). 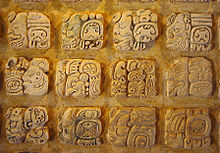 Mexico is home to some of the worlds oldest writing systems such as Mayan Script. Maya writing uses logograms complemented by a set of alphabetical or syllabic glyphs and characters, similar in function to modern Japanese writing. 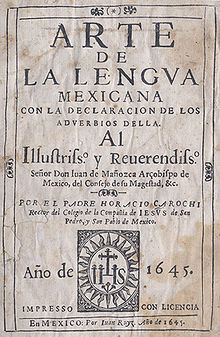 Grammar of Mexican language by Carochi

Mexicans are linguistically diverse, with many speaking European languages as well as various Indigenous Mexican Languages. Spanish is spoken by approximately 92.17% of Mexicans as their first language making them the largest Spanish speaking group in the world[31] followed by Colombia (45,273,925), Spain (41,063,259)[32] and Argentina (40,134,425).[citation needed] Although the great majority speak Spanish de facto the second most populous language among Mexicans is English due to the regional proximity of the United States which calls for a bilingual relationship in order to conduct business and trade as well as the migration of Mexicans into that country who adopt it as a second language.

Mexican Spanish is distinct in dialect, tone and syntax to the Peninsular Spanish spoken in Spain. It contains a large amount of loan words from indigenous languages, mostly from the Nahuatl language such as: "chocolate", "tomate", "mezquite", "chile", and "coyote".[33]

Mexico has no official de jure language,[34] but as of 2003 it recognizes 62 indigenous Amerindian languages as "national languages" along with Spanish which are protected under Mexican National law giving indigenous peoples the entitlement to request public services and documents in their native languages.[35] The law also includes other Amerindian languages regardless of origin, that is, it includes the Amerindian languages of other ethnic groups that are non-native to the Mexican national territory. As such, Mexico's National Commission for the Development of Indigenous Peoples recognizes the language of the Kickapoo who immigrated from the United States,[36] and recognizes the languages of Guatemalan Amerindian refugees.[37] The most numerous indigenous language spoken by Mexicans is Nahuatl which is spoken by 1.7% of the population in Mexico over the age of 5. Approximately 6,044,547 Mexicans (5.4%) speak an indigenous language according to the 2000 Census in Mexico.[38] There are also Mexicans living abroad which speak indigenous languages mostly in the United States but their number is unknown.[39]