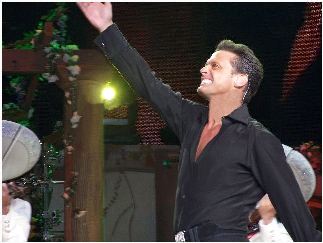 Luis Miguel was originally thought to have been born in , as he grew up in the state of . However, in the early 1980s it was reported in the press that he had actually been born in during a very brief stay in the island by his parents. After it became public knowledge that he was born in Puerto Rico, the Mexican government granted him citizenship. When asked if he recognizes the fact that he was born in Puerto Rico, he goes on to say that he still considers himself 100% Mexican.

He is the son of the late Spanish singer Luisito Rey and Italian-born actress Marcela Basteri. Luis Miguel's mother disappeared some time in 1987, with her whereabouts unknown to the public ever since, although she is claimed to be still alive and living in a mental institute. He has two younger brothers, Sergio and Alejandro, whom he supports financially. These are some of the only details known about Luis Miguel's family life.

His career started early. At the age of four, he appeared in public in Costa Rica. During his adolescent years, his father, who was also his manager, encouraged him to watch and analyze nearly every movie, recording, and concert performance of , as a learning process towards the attainment of a high degree of showmanship. His actual recording career started in 1981, at the age of 11, with the recording of his first album, release by the Mexican branch of EMI Records. Two years later, he started touring Latin American countries including Colombia, Venezuela, Chile and Argentina.

In 1985, he took part in the San Remo Music Festival, where he won his first award with his song Noi Ragazzi Di Oggi. That same year, he was also presented with the "Antorcha de Plata" award in the Viña del Mar Music Festival. The award led to his recording of a duet with Scottish singer . The song was called Me Gustas Tal Como Eres. Marketing and publicity included a brief acting career. He filmed two movies. In 1984, he co-starred in the film Ya Nunca Más; and in 1985, Fiebre De Amor, with singer as his co-star.

In 1987, he signed with Warner Records, giving his career a huge push; especially with the backing of producer and composer Juan Carlos Calderón. His relationship with his father soured soon thereafter, with allegations of mismanagement of his career, and poor financial decisions, risking his earnings.

In 1988, the album Un Hombre Busca Una Mujer brought Luis Miguel the beginning of what would be fame and popularity throughout Latin America. The album's mega-hit single La Incondicional broke all previous records and was a number one hit all through Latin America for over five months.

In 1990, he made a successful transition from child singer to adult showman extraordinaire with the album and an ensuing string of sold-out shows — first in Mexico, then throughout Latin America and elsewhere in the world, where he established a reputation for hard work and for delivering some of the most extraordinary vocals to be heard in popular music.

In 1991, Luis Miguel's career soared to even greater heights and earned him the respect of a wider audience with the release of , an album of romantic Mexican standards, known as boleros. Romances is the best-selling Spanish-language album of all time and the first Spanish album by a male ever to reach platinum status in the United States (albums selling over one million copies).

In 1993, his album won the for Best Latin Pop Album. Luis Miguel became the first Latin artist ever to sell out Madison Square Garden, receiving a special recognition in the middle of his sold-out concert.

In 1994, he released a sequel to Romance, , featuring Miguel as a convincing pop tenor with mastery over timeless Spanish classics such as Solamente Una Vez and Sin Ti. The album went on to earn a Grammy Award, reaching platinum status in the United States.

That same year, Luis Miguel was personally invited by to join him on his album and to perform live in a nationally televised special in honor of Sinatra's 80th birthday; along with other stars such as and .

In 1995, the first recording done of live concert performances was released as .

In 1996, Luis Miguel received a highly sought after and prized recognition with a star on the .

In 1997 Luis Miguel released , the third album of the bolero series. Romances broke all previous records and became the fastest selling Spanish-language album in US history; it rose to #14 on the Billboard chart in its debut week. Romances earned Luis Miguel a and another .

Following the success of Amarte Es Un Placer, Luis Miguel released in 2001, his fourth album in the bolero series. With this album, which sold over two million copies worldwide, he launched throughout the US, Europe, and Latin America.

In 2003, Luis Miguel released his first pop album in over four years. Entitled 33, indicative of his age, it featured a collection of s and songs. The first single "Te Necesito" rose immediately to #1 on Billboard's Hot Latin Tracks list. "33" was the best-selling Latin Pop Album of the Year. On the "", Luis Miguel performed at Mexico's sold-out "", and various sold-out shows at ', as well as other prestigious international venues such as in .

That same year, of presented him with a special award for being the best-selling foreign artist in his country's history, and hosted a special party in his honor in Madrid.

In 2004, Luis Miguel released , a collection of traditional Mexican "mariachi" songs. This album was widely regarded by both critics and fans as one of Miguel's best works; also earning him two s. It sold over 100,000 copies in its first week just in Mexico.

In 2005, Luis Miguel released Grandes Exitos, his first greatest hits album, that featured his greatest songs he recorded during all his career, including two never-released singles: "Misterios Del Amor" and "Si Te Perdiera".

Also, he launched his own line of Chilean , called "Unico", winning a "Gold Medal".

In 2005, the started. In 2006, Luis Miguel made a chain of 30-show completely sold out between Jan. 18-Feb. 27 at the in Mexico City. It is believed to be the highest grossing tour in the history of Mexico and among the highest selling tours globally. It also surpassed Luis Miguel's 25-show run at the venue in 2004. The 123-date tour started last September (2005) in Mexico and then played , and through the end of the year before beginning the Mexican run in January. The tour's total gross was north of $95,000,000, breaking his own record ("Amarte es un Placer" in 1999) as the top-selling tour ever by a Latin artist.

That same year, he released a Christmas album called . The playlist includes many Christmas standards interpreted in Spanish. The album reached #1 on the Billboard charts during the first week of release. His two singles were "Santa Claus Llegó A la Ciudad" (), and "Mi Humilde Oración" (My Grown-up Christmas List).

Luis Miguel is often referred to as "mysterious" by the public and entertainment press. He rarely attends award shows; and when he does, he arrives using a rear entrance, to avoid being seen by the press. He is not known for granting interviews, which would illustrate his preference to keep private matters "private". Because of his musical style, popularity, personality and his numerous relationships with beautiful women, he is considered as the "Latin ".

He has been linked romantically with many famous women and female celebrities.Among the more lasting relationships:
* During the 1980s, he was involved with Lucero and Lucía Mendez, and in the 1990s he was involved with , Rebecca de Alba, Luz Elena Gonzalez, Adriana Fonseca, Isabella Camil, Mariana Seoane and .
* A high-profile relationship with singer/songwriter from 1998 to 2001. [ [http://www.people.com/people/mariah_carey/biography/0,,20006548_10,00.html Biography : People.com ] ] .
* From 2002 to 2005, he was involved with, and for a time, engaged to Cuban-American journalist .
* His unrecognized daughter Michelle is 18 years old in 2008.
* His son, Miguel, aka "Miguelito", was born at in , . Miguelito's mother is Mexican model/actress/singer , 33. She and Luis Miguel became involved in 2005. It has been reported in the media that the couple became "separated" in September of 2007, but has not been confirmed "officially" by either party. It has also been reported that Arámbula returned home to , Mexico, with their son and is living with her parents. That may change, as she is scheduled to begin a television show of babies.
*On July 8, the couple announced they are expecting their second child, who is expected to born in December 2008.

Luis Miguel has been awarded and have reached:

* Almost 100 million copies worldwide.
* 5 s
* 4
* 12 Premio awards
* 4
* 13 Awards
* 3 prizes Antorcha de Plata in the "Festival de la Cancion de in 1985 and 1990.
* Second place in the in Italy with the song "Noi Ragazzi di Oggi" in 1985
* He becomes the youngest Latin artist to receive a Grammy Award in 1985 (he had 15 years at that time)
* Receives "European Excellence" prize in 1990
* South Korea International Music Award in 1991 for Romance
* Special award from the for selling 2 millions copies of "Romance" and "Segundo Romance"
* In 1992 establishes a world record by selling 10,000 tickets (for a concert in the National Auditorium in Mexico City) in 3 hours, with an average sale of 52 tickets per minute.
* First Latin artist to perform a sold-out concert in the Madison Square Garden in New York (Gira Aries in 1993).
* First Latin artist to perform 7 consecutive sold-out concerts in the Circus Maximus Theater in the Caesars Palace of Las Vegas in 1993.
* In 1994 he is invited to record an special-edition duet of "Come Fly With Me" with Frank Sinatra for his album
* In 1995 he is the only Latin artist invited to sing in the show "SINATRA: 80 Years My Way" along with another celebrities as , and
* In 1996 he is the first Latin artist to receive a star in the
* In 1996 he records the song "Sueña" (Spainsh version of "Someday") for the Disney's movie "The Hunchback of Notre Dame"
* In 1997 he is invited to perform in the 30th Anniversary of the Caesars Palace in Las Vegas

To date, Luis Miguel is the second artist with most number one hits on the "Billboard" charts with 16 [ [http://www.billboard.com/bbcom/retrieve_chart_history.do?model.vnuArtistId=32851&model.vnuAlbumId=1105328 Billboard.com - Artist Chart History - Luis Miguel ] ] .