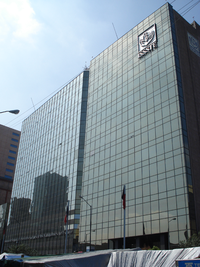 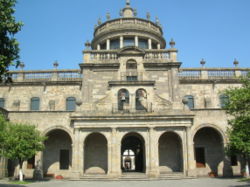 Hospicio Cabañas in Guadalajara is a UNESCO World Heritage Site

Health care in Mexico dates to at least 1791, when the Hospicio Cabañas in Guadalajara, Jalisco, Mexico, was founded. The institution, still functioning, is now a World Heritage Site. It is one of the oldest and largest hospital complexes in Latin America. The complex was founded by the Bishop of Guadalajara to combine the functions of a workhouse, hospital, orphanage, and almshouse.

The ubiquitous Mexican health care program IMSS was founded in 1943.[1] In the early 1990s, Mexico showed clear signs of having entered a transitional stage in the health of its population. When compared with 1940 or even 1970, Mexico in the 1990s exhibited mortality patterns that more closely approximated those found in developed societies.[2] By 2009, during the notorious swine flu pandemic, the World Health Organization director said that Mexico "gave the world a model of rapid and transparent reporting, aggressive control measures, and generous sharing of data and samples". The CDC's flu director Nancy Cox, added that Mexico's response "impressed the entire world".[3] 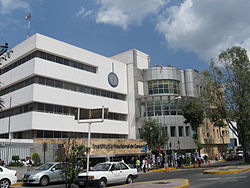 Public health care delivery is accomplished via an elaborate provisioning and delivery system instituted by the Mexican Federal Government. Public health care is provided to all Mexican citizens as guaranteed via Article 4 of the Constitution. Public care is either fully or partially subsidized by the federal government, depending on the person's (Spanish: derechohabiente's) employment status. All Mexican citizens are eligible for subsidized health care regardless of their work status via a system of health care facilities operating under the federal Secretariat of Health (formerly the Secretaria de Salubridad y Asistencia, or SSA) agency.

Employed citizens and their dependents, however, are further eligible to use the health care program administered and operated by the Instituto Mexicano del Seguro Social (IMSS) (English: Mexican Social Security Institute). The IMSS health care program is a tripartite system funded equally by the employee, its private employer, and the federal government.

The IMSS does not provide service to employees of the public sector. Employees in the public sector are serviced by the Instituto de Seguridad y Servicios Sociales de los Trabajadores del Estado (ISSSTE) (English: Institute for Social Security and Services for State Workers), which attends to the health and social care needs of government employees. This includes local, state, and federal government employees.

The government of the states in Mexico also provide health services independently of those services provided by the federal government programs. In most states, the state government has established free or subsidized healthcare to all their citizens. [4]

Aggregate health statistics for Mexico have improved greatly since the 1970s. However, Mexico lags well behind other OECD countries in health status and health care availability.[5]

Total health care spending accounted for 6.4 percent of gross domestic product (GDP) in 2005; per capita spending on health care was US$675 (adjusted for purchasing power parity)—about a quarter of the OECD average.[5] 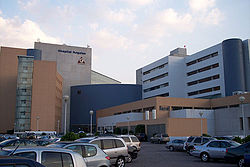 During 2005, 45.5 percent of health spending was paid from public sources—comparable to the share of public spending in the United States but significantly below the OECD average. Private financing in Mexico is almost entirely in the form of out-of-pocket payments, as only 3.1 percent of total expenditures on health are funded through private health insurance.[5] Consistent with every other major industrialized country (except the U.S.), government healthcare in Mexico is universal, making private programs' health insurance unnecessary except for use in private hospitals.

Some authorities have noted that while Mexico has some 3000 private hospitals, some private “hospitals” could hardly be considered hospitals at all, since they have no laboratories, radiography equipment, or even nurses.[6] The remaining 1000 or some public hospitals account for the majority of hospital beds and, in fact, the bulk of private hospitals are institutions with less than 20 beds.

In 2005, Mexico had 1.8 doctors and 2.2 nurses per 1,000 population, a significant increase in health care personnel over the previous decade but again below the OECD averages for these indicators. The mortality rate for children younger than five years was 17 per 1,000 live births in 2005, and Mexico has shown a faster acceleration to lower mortality rates than the U.S., Cuba, and Canada in the last 10 years. Ninety-seven percent of the population had direct access to potable water and 80 percent to sanitation. Also in 2005 the incidence of human immunodeficiency virus/acquired immune deficiency syndrome (HIV/AIDS) among persons aged 15 to 49 was 0.3 percent.[5] At 11,000 deaths/year vs. 22,000/year in the U.S., this represents a 44% higher per capita death rate than the United States.[7] 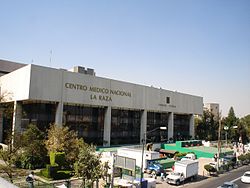 According to the site www.internationalliving.com, health care in Mexico is described as very good to excellent while being highly affordable, with every medium to large city in Mexico having at least one first-rate hospital. In fact, some California insurers sell health insurance policies that require members to go to Mexico for health care where costs are 40% lower.[8] Some of Mexico's top-rate hospitals are internationally accredited.[9] Americans, particularly those living near the Mexican border, now routinely cross the border into Mexico for medical care.[10] Popular specialties include dentistry and plastic surgery. Mexican dentists often charge 20 to 25 percent of US prices,[11] while other procedures typically cost a third what they would cost in the US.[10] The www.internationalliving.com site states that on average, an office visit with a doctor—specialists included—will cost about US$25, an overnight stay in a private hospital room costs about $35, and a visit to a dentist for teeth cleaning costs about $20. Some 40,000 to 80,000 American seniors spend their retirement years in Mexico with a considerable number receiving nursing home and health care.[12]

With many physicians from the U.S. having received their training in Mexico, and with many Mexican doctors having received at least part of their training in the United States, the quality of Mexican health care has been reported to be comparable to that in the United States: "in general, health care in Mexico is very good…and in many places it is excellent."[13][14] "Many people often arrive at the conclusion that because healthcare in Mexico is so cheap compared to the US, the quality of medical attention and knowledge about health care issues in Mexico must be lacking. This is completely false...Mexican hospitals [are] equipped to a first world standard with modern equipment and hygienic practices, [and] many Mexican doctors and dentists...received their training in the US."[15]

On December 1, 2006, the Mexican government created the Health Insurance for a New Generation also known as "Life Insurance for Babies".[16][17][18] This was followed by a February 16, 2009, announcement by President Felipe Calderon where he stated that at the current rate of progress Mexico would receive Universal Health Coverage by 2011,[19] and a May 28, 2009, announcement in which his administration made public Universal Care Coverage for Pregnant Women.[20]