The Cinema of Andhra Pradesh, also referred to as Telugu Cinema or Tollywood, is the Telugu film industry in India. The Telugu language film industry is known for being one of the three largest in terms of no.of films produced yearly in India.[1][2] The Prasads IMAX theatre in Hyderabad is one of the biggest IMAX 3D screens in the world.[3] The industry holds the Guinness World Record for the largest film production facility in the world.[4] Brahmanandam, a Telugu actor, holds Guinness World Record for acting in the most films in the same language.[5][6]

The Telugu film industry has completely shifted its base from Chennai to Hyderabad in the early 1990s during N. T. Rama Rao's political realm.[7] Veteran actor Akkineni Nageswara Rao was the first person to come to Hyderabad and build a studio, which he named Annapurna Studios. The Telugu film industry is one of the three largest film producers in India. About 245 Telugu films were produced in 2006.[8] To date, more than 11,567 films have been made. More than 50 Telugu films so far have been remade or dubbed into other Indian languages (see List of films remade or dubbed from the Telugu language).

The Telugu film industry originated with silent film in 1912, with the production of Bhisma Pratighna.[citation needed] The film was directed by Raghupathi Venkaiah Naidu and his son R. S. Prakash.[9] The two, along with Yaragudipati Varada Rao, would go on to produce and direct dozens of films throughout the decade, casting theater actors in major roles.[10] They established a long-lasting precedent of focusing exclusively on religious themes; Nandanar,[11] Gajendra Moksham, and Matsyavatar, three of their most famous productions, centered on religious figures, parables, and morals.[12]

A still from the 1931 film Bhakta Prahlada the first south Indian talkie film directed by H. M. Reddy, to have a theatrical release[13] 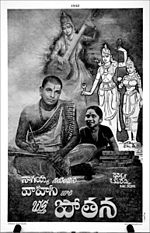 A still from the 1942 film Bhakta Potana played by Chittor V. Nagaiah, the first multilingual actor of India. He was also known as Paul Muni of India in the media. He was the first to portray lead actor roles in Telugu films before Indian Independence[14][15]

In 1931, the first Telugu film with audible dialogue, Bhakta Prahlada, was produced by H.M. Reddy.[16] Popularly known as talkies, films with sound quickly grew in number and popularity. In 1934, the industry saw its first major commercial success with Lavakusa. Directed by C. Pullaiah and starring Parupalli Subbarao and Sriranjani in lead roles, the film attracted unprecedented numbers of viewers to theaters and thrust the young film industry into mainstream culture.[17]

By 1936, the mass appeal of film allowed directors to move away from religious and mythological themes.[17] That year, under the direction of Krithiventi Nageswara Rao, Prema Vijayam, a film focusing on social issues, was released. Its success prompted the production of dozens of other immensely successful 'social films', notably 1939's Vandemataram and Maala Pilla. Touching on societal problems like the status of Untouchables and the practice of giving dowry, Telugu films increasingly focused on contemporary living: 29 of the 96 films released between 1937 and 1947 had social themes.[18]

The outbreak of World War II and the subsequent resource scarcity caused the British Raj to impose a limit on the use of filmstrip in 1943 to 11,000 feet,[19] a sharp reduction from the 20,000 feet that had been common till then.[20] As a result, the number of films produced during the war was substantially lower than in previous years. Nonetheless, before the ban, an important shift occurred in the industry: independent studios formed, actors and actresses were signed to contracts limiting who they could work for, and films moved from social themes to folklore legends.[21]

Pokiri (2006 film) has been remade in Hindi, Tamil and Kannada in a span of 2 years owing to the film's commercial success, the film was screened at the IIFA film festival held in Dubai in 2006.[26] With the strategic increase in production costs, films like Pokiri, Bommarillu, Arundhati (film), Magadheera and Dookudu have been the biggest blockbusters in the last few years. 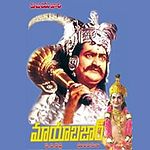 Known for being one of the largest producers of folklore, historical, fantasy and mythological films in Indian cinema, a considerable contribution has been made in this genre.[27][28][29] Veteran B. Vittalacharya is considered as a pioneer in the fantasy genre film making and special effects.[30]

Being a commercially driven industry, films are prioritized primarily based on commercial stand point. Art films and Parallel cinema are given less priority, as per local audience's viewership, with only few exceptions.[citation needed] There is a strong market driven tradition of narrating mythology, history, fairy tales, song and dance, action sequences, large than life characterization of lead actors in Telugu films.[31]

Swathi Muthyam was the only Telugu film to be sent by India as its official entry for the Best Foreign Language Film for the Academy Awards in 1986.[23][32][33] 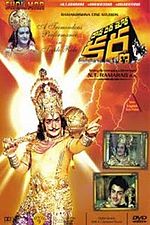 Chittor V. Nagaiah was considered to be one among the most influential actors of South Indian cinema.[14] S. V. Ranga Rao is one of the first Indian actors of the time to receive international award at Indonesian Film Festival, held in Jakarta for the film Narthanasala in 1963.[34]

S. Rajeswara Rao and T. V. Raju were eminent for their contribution to Telugu classical's. The legacy was followed by their sons, Thotakura Somaraju and Saluri Koteswara Rao, popularly known as Raj-Koti duo were one among the few pioneers after Illayaraja, to inculcate western music genre in south Indian cinema. Renowned music composer A. R. Rahman has worked as a key board player for the duo Raj-Koti and Ramesh Naidu in the early 90's[37] Music composers from other regions, like K. V. Mahadevan and Illayaraja, garnered National recognition for their work in Telugu films directed by K. Viswanath.

Film editor, A. Sreekar Prasad has been well known at Indian Cinema's film editing department. Being one of the finest Indian film editors, sreekar prasad has received a record eight National Film Awards in this category.[38] Other noted Telugu film editors include, Marthand K. Venkatesh and Kotagiri Venkateswara Rao.

V. Srinivas Mohan is considered one of the pioneers of visual effects industry in Indian Cinema. He has been working in Telugu, Hindi, and Tamil. Most recently, he has contributed the visual effects for films such as Enthiran and Anaganaga O Dheerudu.[citation needed] Chakri Toleti, a graduate in VFX design from U.S., is another visual effects professional from Andhra Pradesh.[39]

Telugu language, known with the sobriquet Italian of the east, being the second most spoken language in India,[40] linguistics had a major role to play in Telugu films till date.

Dubbed films and actors from other Regions

Tamil films are regularly dubbed into Telugu and have a decent market in Andhra Pradesh. There have been instances of dubbed films from Tamil overtaking profits of Telugu films in the state which made the Andhra government increase the entertainment tax for dubbed films.[41] In 2005, the Telugu box office was entirely dominated by dubs from Tamil.[42] The dubbed version of Enthiran (Robot) grossed

60 crore in Andhra Pradesh, becoming the second highest grossing film in the state.[43]