The cinema of Iraq went through a downturn under Saddam Hussein's regime. The development of film and film-going in Iraq reflects the drastic historical shifts that Iraq has experienced in the 20th century. The current war in Iraq has been an influence on many films being produced.

The first film projected in Iraq was in 1909, but it wasn't until the 20s that film became a cultural activity. The first cinemas, like the famous al-Zawra cinema on Baghdad's bustling thoroughfare al-Rashid, played mostly American silent films for British citizens.

In the 1940s under the rule of King Faisal II of Iraq, a real Iraqi cinema began. Supported by British and French financiers, movie production companies established themselves in Baghdad. The Baghdad Studio was established in 1948, but soon came apart when tensions between the Arab and Jewish founders flared up. For the most part, the product was purely commercial, fluffy romances with plenty of singing and dancing often set in small villages. The World of Arts (Dunyat Alfann) studio, which was founded by actors, reached for more serious fare. In 1955, they produced Haidar Al-Omar's Fitna wa Hassan, an Iraqi retelling of Romeo and Juliet, that received international attention. But for the most part, the strong-fist rule of the state discouraged any socially relevant films.

In 1959 when King Faisel's II government was overthrown, the Cinema and Theater General organization came into existence with the purpose of promoting the political goals of the new regime both in documentaries and features. Typical were documentaries like the 1969 Al Maghishi Project, which showcased the government's irrigation campaigns and the 1967 A Wedding in Heaven, which celebrates the air force and their weapons system. The 1968 revolution that put the Ba'ath party in power further solidified the government's control of film material, and the state's need to make all films validate its power.

Saddam Hussein's ascension to power in 1979 pushed the Iraqi cinema in a slightly different direction. The drain on national resources from the 1980 Iraq-Iran war brought film production to a near halt. The few films put into production were mainly intent on glorifying a mythic Iraqi history or celebrating Hussein's rule. In 1981, the government commissioned Egyptian filmmaker Salah Abouseif to make Al-Qadisiya, a period epic recounting the triumph of the Arabs over the Persians in 636 AD. Likewise Mohamed Shukri Jameel's melodramatic The Great Question (al-Mas' Ala Al-Kubra) cast British actor Oliver Reed as the vicious Lt-Col Gerard Leachman who is righteously killed in the 1920 Iraqi revolution.

In 1980 Hussein promoted his own mythology with the autobiographical 6-hour epic The Long Days (al-Ayyam al-tawila), the saga of Hussein's participation in the 1958 failed assassination attempt on Prime Minister Abd al-Karim Qasim, and his subsequent heroic escape back to Tikrit. Interestingly the film was edited and partially directed by Terrence Young, the British director who made his name helming the early James Bond films Dr. No and Thunderball (film). Hussein is played by Saddam Kamel, a cousin and son-in-law of Hussein's, who eventually ran afoul of the dictator and was murdered in 1996.

After Iraq started attacks against Kuwait, Iraq sanctions made filmmaking an impossibility in the country, although a new generation of filmmakers is coming alive in Baghdad. 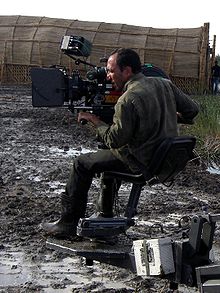