Paul Muni (born Meshilem Meier Weisenfreund, September 22, 1895 – August 25, 1967) was an Austrian-Hungarian-born American stage and film actor. During the 1930s, he was considered the most prestigious actor at Warner Brothers studios, and one of the rare actors who was given the privilege of choosing which parts he wanted.

His acting quality, usually playing a powerful character, such as Scarface, was partly a result of his intense preparation for his parts, often immersing himself in study of the real character's traits and mannerisms. He was also highly skilled in using makeup techniques, a talent he learned from his parents, who were also actors, and from his early years on stage with the Yiddish Theater, in New York. At the age of 12, he played the stage role of an 80-year-old man; in one of his films, Seven Faces, he played seven different characters.

He was nominated six times for an Oscar, winning once as Best Actor in The Story of Louis Pasteur.

Muni was born to a Polish Jewish family in Lemberg, Galicia, a province of the Austro-Hungarian Empire, now Lviv, Ukraine (formerly Lwów, Poland). His family emigrated to the United States in 1902.

He began his acting career on the Yiddish stage in New York City, where his parents were actors with the Yiddish theatre. As a teenager, he developed an affinity for makeup and often played characters much older.[1] Film historian Robert Osborne notes that his makeup skills were so creative, that for most of his roles, "he transformed his appearance so completely, he was dubbed 'the New Lon Chaney.'" In his first stage role, at the age of 12, he played the role of an eighty-year-old man.[2]

He was quickly recognized by Maurice Schwartz, who signed him up with his Yiddish Art Theater.[3] Edward G. Robinson and Paul Muni were cousins to Charles M. Fritz, who was a notable actor during the Great Depression. In 1921, he married Bella Finkel (February 8, 1898 - October 1, 1971), an actress in the Yiddish theatre. They remained married until Muni's death in 1967.

A 1925 New York Times article singled out his and Sam Kasten's performances at the People's Theater as among the highlights of that year's Yiddish theater season, describing them as second only to Ludwig Satz.

Muni began acting on Broadway in 1926. His first role was that of an elderly Jewish man in the play We Americans, written by playwrights Max Siegel and Milton Herbert Gropper; it was also the first time that he ever acted in English. He was signed by Fox three years later, in 1929, and received an Oscar nomination for his first film The Valiant, although the film did poorly at the box office.[1] His second film, Seven Faces, was also a financial failure. Unhappy with the roles offered him, he returned to Broadway, where he starred in a major hit play, Counselor at Law.[2] 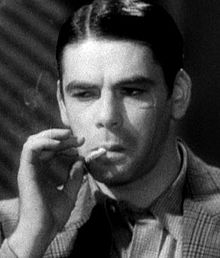 In 1932, Paul Muni returned to Hollywood to star in such harrowing pre-Code films as the original Scarface and I Am a Fugitive from a Chain Gang, for which he received his second Oscar nomination for Best Actor. The acclaim that Muni received as a result of this performances so impressed Warner Brothers, they signed him to a long-term contract, "publicizing him as the screen's greatest actor."[2]

Scarface, also became one of Hollywood's first major gangster films, and was written by Ben Hecht, a leading screenwriter.[4]:6 The film, notes critic Richard Corliss, while a serious gangster film, also "manages both to congratulate journalism for its importance and to chastise it for its chicanery, by underlining the newspapers' complicity in promoting the underworld image." [4] :10

In 1935, Muni persuaded Warner Bros. to take a financial risk by producing its first historical biography, The Story of Louis Pasteur. This became Muni's first of many later biographical roles, and in it he starred as a crusading scientist who fights derision in his native country to prove that his medical theories will save lives. Until that film, most Warner Bros. stories originated from current events and major news stories.

After the sudden success of the film, it gave Warners "box office gold", notes Osborne.[2] Muni won an Oscar for his performance. He then went on to play other historical figures, including Emile Zola, in The Life of Emile Zola (1937) and Juarez (1939). 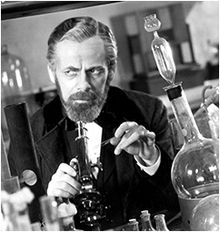 In 1937, he played the starring role as a Chinese peasant, with a new bride, in The Good Earth. It costarred Luise Rainer as his humble wife, who won an Academy Award for her part. The film was a re-creation of a revolutionary period in China, and included special effects for a locust attack and the overthrow of the government. It was based on the classic novel, by Pearl Buck, of the same name. Because he was not of Asian descent, when producer Irving Thalberg offered him the role, he stated, "I'm about as Chinese as Herbert Hoover."[2] 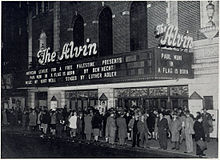 Dissatisfied with life in Hollywood, Muni chose not to renew his contract, and returned to the screen only occasionally for such roles as Frederick Chopin's teacher in A Song to Remember (1945). In 1946, he starred in a rare comic performance, Angel on My Shoulder, playing a gangster whose early death prompts the Devil (played by Claude Rains) to make mischief by putting his soul into the body of a judge, only to have his new identity turn the former criminal into a model citizen.

However, he focused most of his energies on stage work. Also in 1946, he appeared on Broadway in A Flag is Born, also written by Ben Hecht, to help promote the creation of a Jewish state in Israel. Directed by Stella Adler's brother and acted alongside Marlon Brando. [5] Ten years later, in 1955-1956, he had his biggest stage success as the crusading lawyer, Henry Drummond (based on Clarence Darrow), in Inherit the Wind, winning a Tony Award for Best Performance by a Leading Actor in a Play.

In late August 1955, Muni was forced to withdraw from the play Inherit the Wind due to a serious eye ailment causing deterioration in his eyesight. He was later replaced by actor Melvyn Douglas.[6] In early September 1955, Muni, then 59 years old, was diagnosed with a tumor of the left eye. The eye was removed in an operation at Mt. Sinai Hospital in New York. His right eye was reported to be normal.[7] In early December 1955, Muni returned to his starring role as Henry Drummond in the play Inherit the Wind.[8]

After one more film role as an aging doctor in The Last Angry Man (1959), for which he was again nominated for an Oscar, his failing eyesight and other health problems forced him to retire from acting.[2] Muni was nominated six times for Academy Awards, winning once, although he appeared in only twenty-five films during his career.

Paul Muni starred as Willy Loman in the English opening of Death of a Salesman by Arthur Miller, on July 28, 1949 at the Phoenix Theatre, London. He took over from Lee J. Cobb who played the principal role in the original Broadway production. Both productions were directed by Elia Kazan. 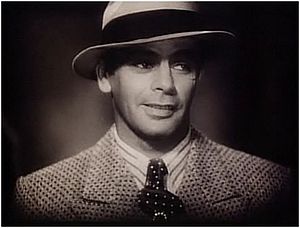 Paul Muni in the trailer for Scarface.

Muni was noted for his intense preparation for his roles, especially his biographies. While preparing for The Story of Louis Pasteur, Muni states that "I read most everything that was in the library, and everything I could lay my hands on that had to do with Pasteur, with Lister, or with his contemporaries."[9] He did the same in preparing for his role as Henry Drummond, in the stage production of Inherit the Wind. He read what he could find, talked to people who knew Darrow personally, and even studied mannerisms from his photographs. "To Paul Muni, acting was not just a career, but an obsession", writes the New York Times. They note that despite his enormous success on both Broadway and in films, "he threw himself into each role with a sense of dedication." Playwright Arthur Miller commented that Muni "was pursued by a fear of failure."[9]

As Muni was born into a theater atmosphere, with both of his parents actors, "he learned his craft carefully and thoroughly." On stage, "a Muni whisper could reach the last balcony of any theater", writes the Times. It adds that his style "had drawn into it the warmth of the Yiddish stage", in which he made his debut at the age of 12. In addition, his techique in using makeup "was a work of art." Combined with acting which followed no "method", he perfected his control of voice and gestures into an acting style that was "unique."[9]

Film critic David Shipman called Muni "an actor of great integrity" and he prepared for his roles meticulously. Muni was widely recognized as an eccentric if talented individual. He would go into a rage whenever anyone wore red, but at the same time he could often be found between sessions relaxing with his violin. Over the years, he also became increasingly dependent on his wife, Bella, who terrified directors by forcing them to redo scenes that did not meet her satisfaction.[10] However, Muni himself was "inflexible on matters of taste and principle", once turning down an $800,000 movie contract because he wasn't happy with the studio's choice of film roles.[9]

He retired from filmmaking in 1959, soon after receiving his fifth Academy Award nomination for The Last Angry Man; however, he made a final television appearance in the series Saints and Sinners in 1962.

In his private life, he was considered "exceedingly shy", and would show agony anytime he was recognized while out shopping or dining. He enjoyed reading and going for walks with his wife in secluded sections of Central Park, and would be at the theater by 7:30PM to prepare for his performances each night. After retiring from acting, he lived in California, in what was considered an "austere" setting, where he and his wife enjoyed their privacy. In his den, which he called his "Shangri-La", he spent his time reading books and listening to the radio.[9]

Muni died of a heart disorder in Montecito, California in 1967, aged 71. Muni died the same year that his Angel On My Shoulder co-star Claude Rains, and another co-star, Spencer Tracy, also died. Muni has a star on the Hollywood Walk of Fame at 6435 Hollywood Blvd. He is interred in the Hollywood Forever Cemetery, Hollywood, CA.