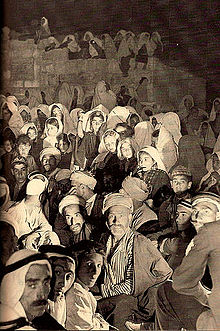 Villagers of Halhul waiting for an open-air film show, around 1940

The first Palestinian film to be made is generally believed to be a documentary on King Ibn Saud of Saudi Arabia´s visit in 1935 to Palestine, made by Ibrahim Hassan Sirhan, based in Jaffa[4](also spelled Ibrahim Hasan Serhan.[5]) Sirhan followed the King and around Palestine, "from Lod to Jaffa and from Jaffa to Tel Aviv". The result was a silent movie that was presented at the Nabi Rubin festivals. Following this documentary, Sirhan joined Jamal al-Asphar to produce a 45-minute film called The Realized Dreams, aiming to "promote the orphans´cause". Sirhan and al-Asphar also produced a documentary about Ahmad Hilmi Pasha, a member of the Higher Arab Commission.[6][7] In 1945 Sirhan established the "Arab Film Company" production studio together with Ahmad Hilmi al-Kilani. The company launched the feature film Holiday Eve, which was followed by preparations for the next film A Storm at Home. The films themselves were lost in 1948, when Sirhan had to flee Jaffa after the town was bombarded.[8]

The Naqba of 1948 had a devastating effect on the Palestinian society, including its nascent film industry. Cinematic endeavours, requiring infrastructure, professional crews, and finance, nearly ceased for two decades.[9] Individual Palestinian participated in the film-production of neighbouring countries. It is reported that Sirhan was involved with the production of the first Jordanian feature film, The Struggle in Jarash, (1957), and another Palestinian, Abdallah Ka´wash, directed the second Jordanian feature film, My Homeland, My Love, in 1964.[10]

After 1967 Palestinian cinema was founded under the auspices of the PLO, funded by Fatah and other Palestinian organisations like PFLP and DFLP. More than 60 films were made in this period, mostly documentaries. The first film festival dedicated to Palestinian films was held in Baghdad in 1973, and Baghdad also hosted the next two Palestinian film festivals, in 1976 and 1980.[11] Mustafa Abu Ali was one of the early Palestinian film directors, and he helped found the Palestinian Cinema Association in Beirut in 1973. Only one dramatic movie was made during the period, namely The return to Haifa in 1982, an adaptation of a short novel by Ghassan Kanafani. [12]

The different organisations set up archives for Palestinian films. The largest such archive was run by PLO's Film Foundation/Palestinian Film Unit. In 1982, when the PLO was forced out of Beirut, the archive was in storage (in the Red Crescenty Hospital), from where it "disappeared" under circumstances which are still unclear.[13]

The fourth period: The return home, from 1980 to the present

The 1996 drama/comedy Chronicle of a Disappearance received international critical acclaim,[14] and it became the first Palestinian movie to receive national release in the United States.[15] A break-out film for its genre, it won a "New Director's Prize" at the Seattle International Film Festival and a "Luigi De Laurentiis Award" at the Venice Film Festival.[16] Notable film directors in this period are especially[17]:

An international effort was launched in 2008 to reopen Cinema Jenin, a cinema located in the Jenin Refugee Camp.

In 2008, three Palestinian feature films and an estimated eight shorts were completed, more than ever before.[18]

In 2010, Hamas, the governing authority in the Gaza Strip, announced the completion of a new film. Titled The Great Liberation, the film depicts the destruction of Israel by Palestinians.[19]

Currently in the Gaza Strip, all film projects must be approved by Hamas' Culture Ministry before they can be screened in public. Independent filmmakers have claimed that the Culture Ministry cracks down on content not conforming to Hamas edicts. In a notable 2010 case, Hamas banned the short film Something Sweet, directed by Khalil al-Muzzayen, which was submitted at the Cannes Film Festival. Hamas banned it from being shown locally due to a four-second scene where a woman is shown with her hair uncovered. In 2011, a film festival hosted by the Gaza Women's Affairs Center which included documentaries and fictional pieces on women's issues, but the Culture Ministry censored numerous scenes. One film had to remove a scene where a woman lowered one shoulder of her dress, and another had to remove a scene of a man swearing.[20] 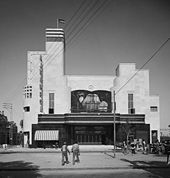