Donald Arthur "Don" Mattingly (born April 20, 1961) is a former Major League Baseball first baseman and current manager of the Los Angeles Dodgers. Nicknamed "The Hit Man" and "Donnie Baseball", he played his entire 14-year baseball career for the New York Yankees (1982–1995). After his playing career, he also served as a hitting coach for the Yankees and Dodgers prior to taking on his current position as manager of the Dodgers.

Following this outstanding career, Don accepted a scholarship to play baseball for the Indiana State Sycamores and Coach Bob Warn. However, after being drafted by the Yankees, Don decided to begin his professional career.

Mattingly spent his official rookie season of 1983 as a part-time first baseman and outfielder, waiting for a full-time spot in the lineup to open up. He played well, hitting .283 in 279 at-bats, but with little power.

Slugger Steve Balboni was the favored organizational prospect at first base, but it became apparent in 1982-83 that Balboni was too prone to striking out and that his ranging right-handed swing was not suited for the Yankee Stadium. Mattingly quickly surpassed Balboni on the team's depth chart, and Balboni was traded to the Kansas City Royals in 1984.

Mattingly became the Yankees' full-time first baseman and an MVP candidate. He hit .343 and beat out teammate Dave Winfield in a close race for the American League batting title with a 4-for-5 game on the last day of the season. Mattingly also led the league with 207 hits. He developed a power stroke, slugging a league-leading 44 doubles to go with 23 home runs. He was 2nd in the league in slugging percentage (.537) and at bats per strikeout (18.3), 4th in total bases (324), 5th in RBIs (110), 6th in sacrifice flies (9), and 10th in on base percentage (.381). He also batted .400 with runners in scoring position. 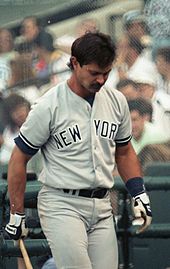 Mattingly with the Yankees.

Mattingly did just as well in 1986, leading the league with 238 hits, 53 doubles, 388 total bases, and a .573 slugging percentage. He also batted .352 (2nd in the league), hit 31 home runs (6th) and drove in 113 runs (3rd). However, he was easily beaten in the American League MVP voting by pitcher Roger Clemens, who also won the Cy Young Award unanimously that year.

In 1987, Mattingly tied Dale Long's major league record by hitting home runs in eight consecutive games (record later tied again by Ken Griffey, Jr., of Seattle in 1993), as well as stroking an extra base hit in ten consecutive games. Mattingly had a record 10 home runs during this streak (Long & Griffey had eight of them). Also that season, Mattingly set a major league record by hitting six grand slam home runs in a season, a record matched by Travis Hafner during the 2006 season. Mattingly's Grand Slams in 1987 were also the only six Grand Slams of his career.

In June 1987, it was reported that Mattingly injured his back during some clubhouse horseplay with pitcher Bob Shirley though both denied this.[1] Nevertheless, he finished with a .327 batting average, 30 home runs, and 115 RBIs, his fourth straight year with at least 110 RBIs. Between 1985 and 1987, Mattingly hit 96 home runs with just 114 strikeouts.

Though Mattingly would recover, recurrent back woes would curtail his statistics, and eventually, his career.

Mattingly's back problems flared up anew in 1990; after struggling with the bat, he had to go on the disabled list in July, only returning late in the season for an ineffective finish. His stat line—a .256 average, 5 home runs and 42 RBI in almost 400 at-bats—came as a shock. Mattingly underwent extensive therapy in the offseason, but his hitting ability was never quite the same. Though he averaged .290 over his final five seasons, he became more of a slap hitter, hitting just 53 home runs over that timeframe. Mattingly's defense remained stellar, but he was not always physically able to play.

Mattingly made his major league debut in 1982, the year after the Yankees lost the World Series. The team did not reach the postseason in any of Mattingly's first 13 years, although they arguably would have made the playoffs in 1994, when the player's strike ended the season prematurely with the Yankees having the best record in the American League.

In 1995, Mattingly finally reached the playoffs when the Yankees won the AL wild card on the next-to-last day of the season. In the only postseason series of his career, facing the Seattle Mariners, Mattingly batted .417 with 6 RBI and a memorable go-ahead home run in Game Two, his final game at Yankee Stadium. In the final game of the series (and of his career), Mattingly again broke a tie with a two-run double. The New York bullpen faltered and Seattle won in the 11th inning of the decisive Game Five. 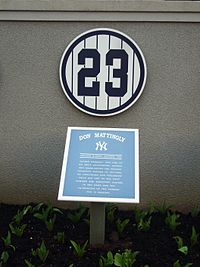 Mattingly finished his career with 2,153 hits, 222 home runs, 1,099 RBI, and a .307 lifetime average. He is commonly cited as the best Yankee player to have never played in a World Series. His career had bad timing, as the Yankees lost the World Series the year before he broke into the big leagues and they ended up winning the World Series in the first year of Mattingly's retirement. This World Series drought (1982–1995) was the longest in Yankees history since the start of the Babe Ruth era and it was worsened by the player's strike in 1994, which ended a promising chance for a World Series title.

The Yankees retired Mattingly's number 23 and dedicated his plaque for Monument Park at Yankee Stadium on August 31, 1997. The plaque calls him "A humble man of grace and dignity, a captain who led by example, proud of the pinstripe tradition and dedicated to the pursuit of excellence, a Yankee forever."

Don Mattingly has been on the hall of fame ballot since 2001, but has never received the percentage of votes necessary for election. In his first year, he received 145 votes (28.2%), but this has steadily declined. In 2009, 12% of voters still put him on their ballots.[3]

Back with the Yankees 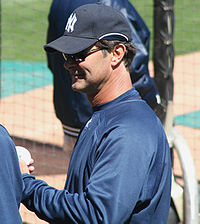 Mattingly as hitting coach with the New York Yankees

After retiring as a player, Mattingly spent seven seasons as a special instructor during Yankees' spring training in Tampa, Florida from 1997-2003.

Following the 2003 season, the Yankees named Mattingly the hitting coach. He spent three seasons in that role, receiving much praise from the Yankees organization and his players. Under Mattingly, the Yankees set an all-time franchise record with 242 home runs in 2004.

On October 18, 2007, Don Mattingly was considered a front runner for the Yankee's manager position, after Joe Torre declined a one year contract extension. Mattingly was interviewed, along with Joe Girardi and Tony Peña. The Yankees offered the managerial position to Girardi, who accepted.[4]

Mattingly with the Dodgers

After not being offered the position of manager for the Yankees, Mattingly followed Joe Torre to the Los Angeles Dodgers to serve as the team's hitting coach. On January 22, 2008, Mattingly was replaced as hitting coach, citing family reasons, and would instead serve as major league special assignment coach for the Dodgers in 2008.[5] It was the first time he worked for a team other than the New York Yankees in his professional baseball career. The Los Angeles Times reported on July 9, 2008 that Mattingly would once again be the Dodgers' hitting coach, replacing Mike Easler.[6] The Dodgers made the playoffs in 2008 and again in 2009 and in both years, advanced to the National League Championship Series, largely behind the bat of mid-season acquisition Manny Ramirez, before losing both times in the NLCS to the Philadelphia Phillies.

Mattingly made his managerial debut on March 31, 2011 by defeating the San Francisco Giants 2-1 at Dodger Stadium.[10]

Mattingly married Kim Sexton on September 8, 1979; they are now divorced. They have three sons: Taylor, Preston, and Jordon, two of whom attempted careers at professional baseball. 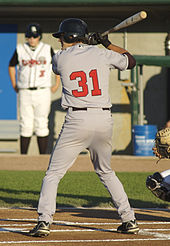 Taylor was drafted in the 42nd round (1262nd overall) of the 2003 Major League Baseball Draft by the New York Yankees, and played in 24 games for the Gulf Coast Yankees in the rookie league before an injury cut short his season. After sitting out all of 2004 and 2005, Taylor retired from baseball in 2005 after only 58 professional at bats. Of his eldest son, Don mentioned: "He loved the game, not the lifestyle."[11]

Preston was chosen in the first round (31st overall) of the 2006 Major League Baseball Draft by the Los Angeles Dodgers and was rated as a B- prospect in John Sickels' 2007 Baseball Prospect Book. Sickels noted, "Position a question but has promising tools and bloodlines."[12] Preston was traded to the Cleveland Indians on September 26, 2010, just nine days after his father was announced as the manager of the Dodgers for the 2011 season.[13] He was subsequently released by the Indians at the end of spring training, and resigned with the Dodgers.[14]

Mattingly remarried on December 10, 2010 in his hometown of Evansville, Indiana. The marriage as well as his managing the Phoenix Desert Dogs of the Arizona Fall League kept him from attending the Fall 2010 Winter Meetings.[15]

During the late 1980s and early 1990s, Don Mattingly was the owner of a restaurant in Evansville, Indiana called "Mattingly's 23", after the uniform number he wore for most of his career. (During his first two seasons, he wore uniform number 46.)[citation needed]

In 2005, Mattingly launched Mattingly Sports, a baseball and softball equipment company, based primarily around the patented V-Grip baseball and softball bats. After watching his kids and their friends struggle to maintain the proper hitting grip, Don, along with co-inventor Jim Wells, created the V-Grip as a way to ensure the proper alignment of the hands and to keep the bat out in the hitter's fingertips. A third founder, Skip Shaw, was brought in to grow the company into a meaningful player in the baseball and softball equipment marketplace. The V-Grip bats have been approved for game play by all of the major, non-professional leagues and associations including Little League Baseball, Babe Ruth (including Ripken Baseball), Pony League, Dixie Youth, AABC, ASA, USSSA, the National Federation of High Schools, and the NCAA.[16]

Mattingly appeared in a baseball-themed episode of The Simpsons, entitled "Homer at the Bat". In the episode (originally aired on February 20, 1992), team owner Mr. Burns repeatedly orders Mattingly to shave off his sideburns, even though Mattingly has no sideburns. A confused Mattingly returns with 1/3 of his head shaved from one ear over the top of the head to other. The irate Burns cuts him from the team because he would not "shave those sideburns!" As he departs, the exasperated Mattingly says to himself, "I still like him better than Steinbrenner."

In 1991, before the episode aired but after it was produced, then-Yankees manager Stump Merrill told him that until he cut his hair, he would not play. This was in accord with Yankee owner George Steinbrenner's policy requiring his players to maintain well-kept head and facial hair, although at the time, Steinbrenner was suspended. Mattingly was sporting a longish or mullet like hair style, and when he refused to cut it, he was benched.[17][18] This led to huge media frenzy with reporters and talk radio repeatedly mocking the team so much so that the WPIX broadcasting crew of Phil Rizzuto, Bobby Murcer and Tom Seaver lampooned the incident before the start of a game on a pregame show with Rizzuto playing the role of a barber sent to enforce the policy. Mimicking the controversy, a perfectly groomed Seaver has hair that to Rizzuto appears "a bit too long." Before proceeding with the telecast Rizzuto "trims" Seaver's hair with a barber shears.

Many people believed the joke in The Simpsons episode to be a reference to the incident, but "Homer at the Bat" was actually recorded a year before it happened. In 1995, Mattingly again ran afoul of the policy when he grew a goatee.

Mattingly has also appeared in public service announcements airing on the Spike TV network advocating fathers spending time with their children as part of the "True Dads" campaign to encourage men to take an active role in their children's lives.[19]

Mattingly is referred to by name in several episodes of Seinfeld. In one memorable episode, his uniform pants split because they were made of 100% cotton at the behest of George Costanza.