Miguel Odalis Tejada (born on May 25, 1974, in Baní, Dominican Republic)[1] was a Major League Baseball infielder who has played for the San Francisco Giants, the San Diego Padres, the Houston Astros, the Baltimore Orioles and the Oakland Athletics. He began his first six seasons of his career with the A's, where he began his streak of 1,152 consecutive games, that ended with the Orioles on June 22, 2007. In 2002, he was awarded the AL MVP award, and he was the MVP of the 2005 All-Star Game. He was released by the Giants in September 2011.

His nickname is "La Gua Gua" which means "the bus" in certain Spanish dialects, as Tejada was known for his ability to drive in runs. On February 11, 2009, he pleaded guilty to one count of perjury for lying to Congress in his testimony on whether or not Rafael Palmeiro lied about his steroid use.[2]

Tejada grew up in extreme poverty in Baní, a city approximately 40 miles (65 km) southwest of Santo Domingo, capital of the Dominican Republic. Miguel Tejada grew up idolizing the Baltimore Orioles shortstop Cal Ripken Jr.[3] Attended Saint Leo University during the Spring Semester of 2007. Led the Lions in all batting, pitching, and defensive categories. Miguel Tejada's rise from the slums of Baní through the minors and into the Major Leagues is chronicled in the book Away Games: The Life and Times of a Latin Ballplayer by Marcos Breton and Jose Luis Villegas. Away Games describes the struggles of Dominican players in general and Tejada in particular as they arrive in the U.S. speaking very little English often in small towns playing for minor league teams with dreams of making it big.[4]

Tejada developed quickly into a top-notch prospect, showing early signs of power. He reached the Majors towards the end of the 1997 season, joining a struggling Oakland Athletics club. Though he only hit .202 in 26 games that year, the A's saw potential in the 23-year-old Tejada. This was bolstered by his performance with the Edmonton Trappers (AAA) in the Pacific Coast League during the season, and returning to the minors to lead the Trappers to a PCL championship that year. He was rewarded with the starting shortstop job beginning in 1998.

After a solid 87-win campaign in 1999, Tejada and a core of young players led their A's to their first American League Western Division title in eight years in 2000. Bolstered by an American League MVP-winning performance by first baseman Jason Giambi, and aided by Tejada's .275 average and 30 home runs, the A's won 91 games. The A's faced the New York Yankees in the first round of the postseason, which was won by the Yankees 3-2.

In 2001, Tejada had a comparable offensive year, hitting .267 with 31 homers. The A's captured the American League wild card with a 102-60 record. In the postseason, however, the A's fell to the Yankees in five games, blowing an initial 2-0 series lead.

Tejada's breakout year came in 2002. With the departure of Jason Giambi to the New York Yankees during the offseason, and a leg injury to slugger Jermaine Dye, the A's lost two of their key offensive players. Tejada hit .308 with 34 homers and led the A's to their second Western Division title in three years. Their campaign included an American League record 20 game winning-streak. Tejada contributed one-out, game-winning hits in the 18th and 19th games of that run: a three-run homer off Minnesota Twins closer Eddie Guardado for a 7-5 victory and a bases-loaded single against Kansas City Royals reliever Jason Grimsley to break a 6-6 tie. Tejada also showed modest speed on the basepaths with 18 steals over a two-year stretch. His performance was rewarded with the 2002 American League MVP award. For the third straight year, though, the A's fell in the fifth game of the ALDS, this time to the Minnesota Twins.

The next year, both the A's and Tejada got off to a slow start, with the shortstop hitting under .200 for the first month of the season. Improved play in the second half of the season led the A's to their second straight Western Division title and their third in four years. Tejada hit .278 with 27 homers for the year, a decrease from his numbers in 2002, but still leading many offensive categories for shortstops.

In a tension-filled series, the powerful offense of the Boston Red Sox narrowly edged out the A's in the first round, once again in five games. Tejada was known for his public display of anger toward Boston starting pitcher Derek Lowe at the series' conclusion for what he perceived as obscene gestures. Lowe denied the accusation, claiming his fist pump was in celebration only.[citation needed] 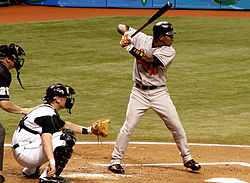 Tejada batting when he played for the Baltimore Orioles.

By the end of the 2003 season, Tejada had established himself as one of baseball's premier shortstops. The A's elected not to re-sign the free agent, citing budget concerns and a young Bobby Crosby coming through the system, so Tejada signed a six-year, $72 million deal with the Baltimore Orioles during the offseason.

On arrival in Baltimore, Tejada was given uniform number 10, since 4, his number in Oakland, had been retired for former manager Earl Weaver. As an Oriole, Tejada followed in the footsteps of legendary Baltimore shortstop Cal Ripken Jr.. Like Ripken, Tejada was a strong and durable shortstop with unusual power numbers for a middle infielder.

On July 12, 2004, Tejada won the Century 21 Home Run Derby in Houston. Tejada hit a record 27 home runs in the contest, including a record 15 homers in the second round. He defeated Houston Astros outfielder Lance Berkman (who would later become his teammate) 5-4 in the final round of the contest. Both records were broken the following year in Detroit by Bobby Abreu. 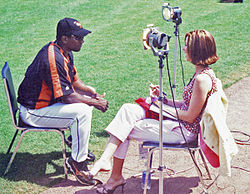 While Tejada did not participate in the Home Run Derby in 2005, he was an All-Star and starter for the AL. In his first All-Star start, Tejada hit a solo home run against John Smoltz of the Atlanta Braves, had a sacrifice RBI and was part of an all-Oriole double play with teammate Brian Roberts. His efforts earned him the All-Star MVP, winning a Chevrolet Corvette.

On December 8, 2005, it was widely reported by the Associated Press that Tejada asked the Orioles for a trade, citing unhappiness with the team's direction. Tejada challenged those statements in an interview with Comcast Sportsnet's Kelli Johnson, saying he only asked for a better team, referring to his hope that the Baltimore Orioles would improve after their eighth straight losing season.[citation needed]

Several weeks later, Tejada reiterated his complaints with the Orioles' lack of action and demanded to be traded.[citation needed] Tejada stated that he wants a "good group that helps me to win" and commented briefly on his alleged non-involvement in Palmeiro's steroid scandal. On January 7, 2006, Tejada stated his intent to remain with Baltimore for "the rest of [his] career."[citation needed] This statement was made to Orioles Vice President Jim Duquette in a meeting arranged by mutual friend and teammate Melvin Mora. It was reported that Tejada was claimed by the Chicago White Sox off trade waivers, but the two teams did not make a deal for Tejada.[citation needed] 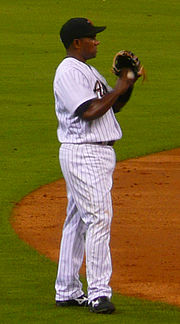 Tejada playing for the Houston Astros in 2008

On December 12, 2007, Tejada was dealt to the Houston Astros for five players, including SP Troy Patton, OF Luke Scott, RP Dennis Sarfate and RP/SP Matt Albers.[6]

Tejada scored his 1,000th career run on July 7, 2008, at PNC Park. In the 2008 All-Star Game Tejada singled leading off the top of the eighth stole second with one out and advanced to third on a throwing error and scored on Padres' first baseman Adrian Gonzalez"s sacrifice fly.

On January 23, 2010, Tejada signed a one-year; 6 million dollar, contract with the Baltimore Orioles the team he previously played for.[citation needed]

On September 22, 2005, ESPN reported that Rafael Palmeiro, who had tested positive for steroids and was suspended for 10 games under Major League Baseball's steroid policy, implicated Tejada to baseball's arbitration panel, suggesting that a supplement given to him by Tejada was responsible for the steroid entering his system. Tejada has denied the allegations,[15] saying that the only thing he gave Palmeiro was vitamin B-12, a completely legal substance under current MLB policy.

On September 24, 2005, the Baltimore Sun reported that "The Health Policy Advisory Committee, which oversees baseball's testing policy, issued a statement that exonerated Tejada and chastised the media for reporting that he might have distributed steroids to another player."[16]

In José Canseco's 2005 book, Juiced: Wild Times, Rampant 'Roids, Smash Hits & How Baseball Got Big, he mentions that he believes Tejada might have taken steroids. He claims to have spoken to him about them and the next season seeing him at spring training looking more defined. He never claims to have injected him with them, like he did with Palmeiro, McGwire and other ballplayers.

On September 30, 2006 the Los Angeles Times reported that former relief pitcher Jason Grimsley, during a June 6, 2006 federal raid, told federal agents investigating steroids in baseball named Tejada as a user of "anabolic steroids." The Times reported that Tejada was one of five names blacked out in an affidavit filed in federal court.[17] However, on October 3, 2006, the Washington Post reported that San Francisco United States attorney Kevin Ryan said that the Los Angeles Times report contained "significant inaccuracies."[18] Tejada, along with the other four players named, has denounced the story.[18]

On December 13, 2007, Tejada was mentioned in the Mitchell Report in connection to steroids. In the report, Tejada is said to have received $1,500 worth of steroids.[19]

A report surfaced on January 15, 2008 stating that Rep. Henry Waxman had asked the Justice Department to investigate whether Tejada was truthful when speaking to the House committee when being interviewed in 2005 regarding possible connections to Rafael Palmeiro.[20][21]

On February 10, 2009, Tejada was charged with lying to Congress about performance enhancing drug usage in Major League Baseball.[22] On February 11, Tejada pleaded guilty to charges that he lied to Congress in 2005.[23] He faced up to one year in federal prison and deportation.[24] On March 26, 2009, he received a one year probation.[25]

On April 17, 2008, Tejada was confronted by an ESPN reporter during a sit-down interview with documentation revealing that Tejada had been lying about his age ever since he first signed a Major League Baseball contract in 1993. Tejada had claimed to have been born in 1976 when a Dominican birth certificate showed that he was born in 1974. That birth certificate also shows the spelling of his surname as "Tejeda" rather than "Tejada".[19][26] He struggled to take off his microphone and kept questioning who the interviewer was referring to. Tejada stormed off the set, effectively ending the interview.

Tejada is featured in the 2011 film Moneyball, which takes place during the 2002 Oakland Athletics season. However, as it was in production during the 2011 Major League Baseball season, Tejada was unavailable to star as himself.