Mark Teixeira
This article is about the Major League Baseball player. For the comic book artist, see Mark Texeira.

Mark Charles Teixeira (pronounced /teɪˈʃɛrə/ tay-sherr-ə; born April 11, 1980, in Annapolis, Maryland), nicknamed "Tex" is an American Major League Baseball player for the New York Yankees. Mostly a first baseman, he has also played third base and in the outfield. He played college baseball at Georgia Tech, where in 2001 he won the Dick Howser Trophy as the national collegiate baseball player of the year.

Teixeira was drafted in 2001 by the Texas Rangers, and made his MLB debut for them in 2003. In mid-2007 he was traded to the Atlanta Braves, and traded again in mid-2008 to the Los Angeles Angels of Anaheim. In December 2008, he agreed to a contract with the New York Yankees. Teixeira has won four Gold Glove Awards and three Silver Slugger Awards. Teixeira also holds the all-time major league record for most games with a home run from both sides of the plate, with 12.

Teixeira grew up in Severna Park, Maryland, and attended Mount Saint Joseph High School in Baltimore, Maryland, where he played for the school's varsity baseball team. Teixeira is a Portuguese American. He also has roots in the South American country of British Guiana (now Guyana), the country from which his grandfather migrated as a young man.[1]

Teixeira was originally chosen in the ninth round of the 1998 Major League Baseball Draft by the Boston Red Sox. Teixeira chose not to sign with the Red Sox, however, opting instead to play college baseball for Georgia Tech.

Teixeira played college baseball at Georgia Tech. In 2000, his batting average was .427, and his OPS was 1.319. He also won the Dick Howser Trophy as the national collegiate baseball player of the year. 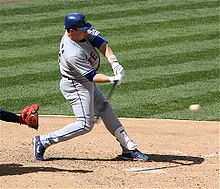 Teixeira as a member of the Rangers.

In 2001, Teixeira re-entered the draft and was selected by the Texas Rangers with the fifth overall pick. The Philadelphia Phillies considered selecting him with the fourth overall pick, but the demands of Teixeira's agent Scott Boras swayed the Phillies to select Gavin Floyd. The Rangers signed Teixeira to a Major League contract worth $9.5 million over 4 years.

As a rookie in 2003, Teixeira hit .296 with a .811 OPS and 26 home runs. He improved on these numbers in 2004, batting .281 with an OPS of .930, 38 home runs, and 112 RBI. On August 17, 2004, he hit for the cycle. For his accomplishments in 2005, he earned the Silver Slugger Award as the best-hitting first baseman in the American League as well as the Gold Glove signifying his place as the best fielding first baseman in the American League. He was also named to his first All-Star Game after winning the fan voting portion of the selection to be named the starting first baseman for his league. During the game, Teixeira hit a home run from the right hand side of the plate, something he had failed to do in the entire first half of the season. In a five game span around the All-Star Game, Teixeira hit five home runs with 13 RBI. He finished July with 13 home runs and 30 RBI and was named the American League Player of the Month. Overall, Teixeira batted .301 with 43 home runs and 144 RBI in the 2005 season.

In 2005, Teixeira became the third switch-hitter in MLB history to hit at least 20 home runs in each of his first three seasons, after Eddie Murray and Chipper Jones. He is also one of just five players in Major League history to hit at least 100 home runs in his first three seasons, joining Hall of Famers Joe DiMaggio, Ralph Kiner, and Eddie Mathews as well as current first base star, Albert Pujols. Other players - Mark McGwire, José Canseco, Todd Helton, Ryan Howard - have hit 100+ home runs in their first three full seasons, but these players had all played partial seasons prior to playing their first three full seasons. His 2005 total of 144 RBI is a Major League record for a switch-hitter.[2]

On Mother's Day, May 14, 2006, Teixeira was one of more than 50 hitters who brandished a pink bat to benefit the Breast Cancer Foundation.

Teixeira's 2006 season began slowly, as he collected only nine home runs before the All-Star Break. After the All-Star Break, however, he was among the league's leaders in home runs, and again finished with over 30 homers and 100 RBI for the season.

Teixeira agreed to a two-year $15.98 million contract before the 2006 season to avoid his first two years of arbitration.[3]

On June 9, 2007, Teixeira's franchise record 507 consecutive-game streak came to an end. Teixeira landed awkwardly at first base after running out a grounder in a game against the Milwaukee Brewers the previous day. The streak was second to Miguel Tejada at the time. The strained quadriceps muscle placed Teixeira on the disabled list for only the second time of his career.

In July 2007, two weeks after turning down an eight-year, $140 million contract extension from the Rangers, Teixeira was traded to the Atlanta Braves (along with left-handed reliever Ron Mahay) for catcher/first baseman Jarrod Saltalamacchia, and four prospects: shortstop Elvis Andrus, and starting pitchers Matt Harrison, Neftali Feliz and Beau Jones.[4] Teixeira was activated for that night's game against the Houston Astros and arrived in the dugout during the seventh inning. He was promptly shown on Turner Field's high definition video board and received a boisterous applause from the Atlanta crowd.

In his Braves debut on August 1, 2007, Teixeira hit a 3-run homer and drove in 4 runs in a 12–3 rout of the Houston Astros.[5] Teixeira went on to homer in each of the following two games, becoming just the second player to homer in his first three games as a Brave - the first being Gary Sheffield in 2002.

On August 19, 2007, Teixeira had his first multi-HR game against the Arizona Diamondbacks off Yusmeiro Petit. He would repeat that feat the next day, going deep for two three-run home runs versus the Cincinnati Reds. Teixeira, a switch-hitter, hit both homers on the 19th batting from the left side of the plate, and hit his homers on the 20th from the right side. He was named co-NL Player of the Week from August 20–26 by slugging .793 with three home runs and as expected, he was awarded NL Player of the Month for August. On September 22, Teixeira had his first walk-off hit with the Braves when he singled in Willie Harris giving the Braves a 4-3 extra-inning victory.[6]

Teixeira playing for the Angels in 2008 American League Division Series Game 4 on October 6.

In July 2008, Teixeira was traded to the Los Angeles Angels of Anaheim for Casey Kotchman and minor league pitcher Stephen Marek.[8] Batting third in the Angel order, Teixeira hit .358 with 13 home runs and 43 RBIs after the trade to help his new team to their first 100-win season in franchise history. Through 2011, he was one of seven major leaguers to have had at least four 30-homer, 100-RBI seasons in their first five years, along with Chuck Klein, Joe DiMaggio, Ted Williams, Ralph Kiner, Albert Pujols, and Ryan Braun.[9] Teixeira became a free agent following the World Series. 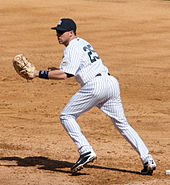 Teixeira, pictured in 2009, has been one of the best defensive first basemen in the majors.

Teixeira stated that he wanted to play closer to his family in Severna Park, Maryland, between Baltimore and Washington. Both the Baltimore Orioles and Washington Nationals offered contracts that would have been the most lucrative in the organization, and among the longest and most lucrative in Major League Baseball.[citation needed] In December 2008, Teixeira agreed preliminarily to a deal with the New York Yankees worth $180 million over 8 years, and he was formally introduced as a Yankee on January 6, 2009. The contract included a full no-trade clause, plus a $5 million signing bonus. He signed with the Yankees over a number of other clubs, including the Los Angeles Angels of Anaheim, Boston Red Sox, Washington Nationals and Baltimore Orioles. Teixeira wears number 25 instead of his preferred number 23, since 23 is retired in honor of Don Mattingly. Mattingly was Teixeira's childhood idol, and was the reason Teixeira wore 23 earlier in his career.[10][11][12]

For the 2009 season, Teixeira was awarded both the Gold Glove and Silver Slugger awards at first base in the American League. He also finished second in the AL MVP balloting behind Twins' catcher Joe Mauer. 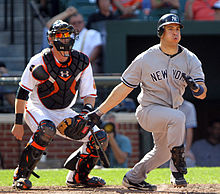 Teixeira swings at a pitch in 2011

On May 8, 2010, he became the second Yankees player to hit three home runs in one game against the Boston Red Sox, joining Lou Gehrig, who accomplished the feat on June 23, 1927.[14] Once again, Teixeira won the 2010 Gold Glove Award for American League first basemen. Teixeira never fully recovered from his slow start in April and May, hitting a career-low .256, but still managed to hit 33 home runs and 108 runs batted in for the 2010 season.[15]

On August 2, 2011 Teixeira hit a home run from both sides of the plate in the same game for the 12th time in his career, breaking a three-way tie with Chili Davis and Eddie Murray for the most such games all-time.[17]

In August 2011, Teixeira and Curtis Granderson became the first Yankees teammates to have 30 home runs in 115 games since Roger Maris and Mickey Mantle in 1961.[18]

Through 2011, he had the third-best career fielding percentage among major league first basemen (.996), behind Casey Kotchman and Kevin Youkilis.[19] Teixeira continued his postseason struggles in 2011. He batted only .167 with 1 RBI in a divisional round loss to the Detroit Tigers.

After signing his first major league contract, Teixeira set up a scholarship at his high school in honor of a friend who was killed in a car accident.[20]

Teixeira and his family reside in Greenwich, Connecticut.[21] His hobbies include hunting, golfing, reading, and fishing.[22] In 2006, Teixeira and his wife Leigh Williams established the Mark Teixeira Charitable Fund that supported six $5,000 scholarships at three high schools in the Dallas/Fort Worth area. They have three children, sons Jack Gordan and William Charles, and daughter Addison Leigh.[23] Mark's family ancestry is Portuguese (Guyanese).[24][25]

Teixeira enjoys Broadway theatre and identifies Les Misérables as his favorite production.[26] In August 2011 Teixeira made a cameo appearance during the eighth and final season of the HBO TV series Entourage along with teammate Alex Rodriguez. Eduardo Nunez is also seen in the cameo.

‹ The template below is being considered for deletion. See templates for discussion to help reach a consensus.›