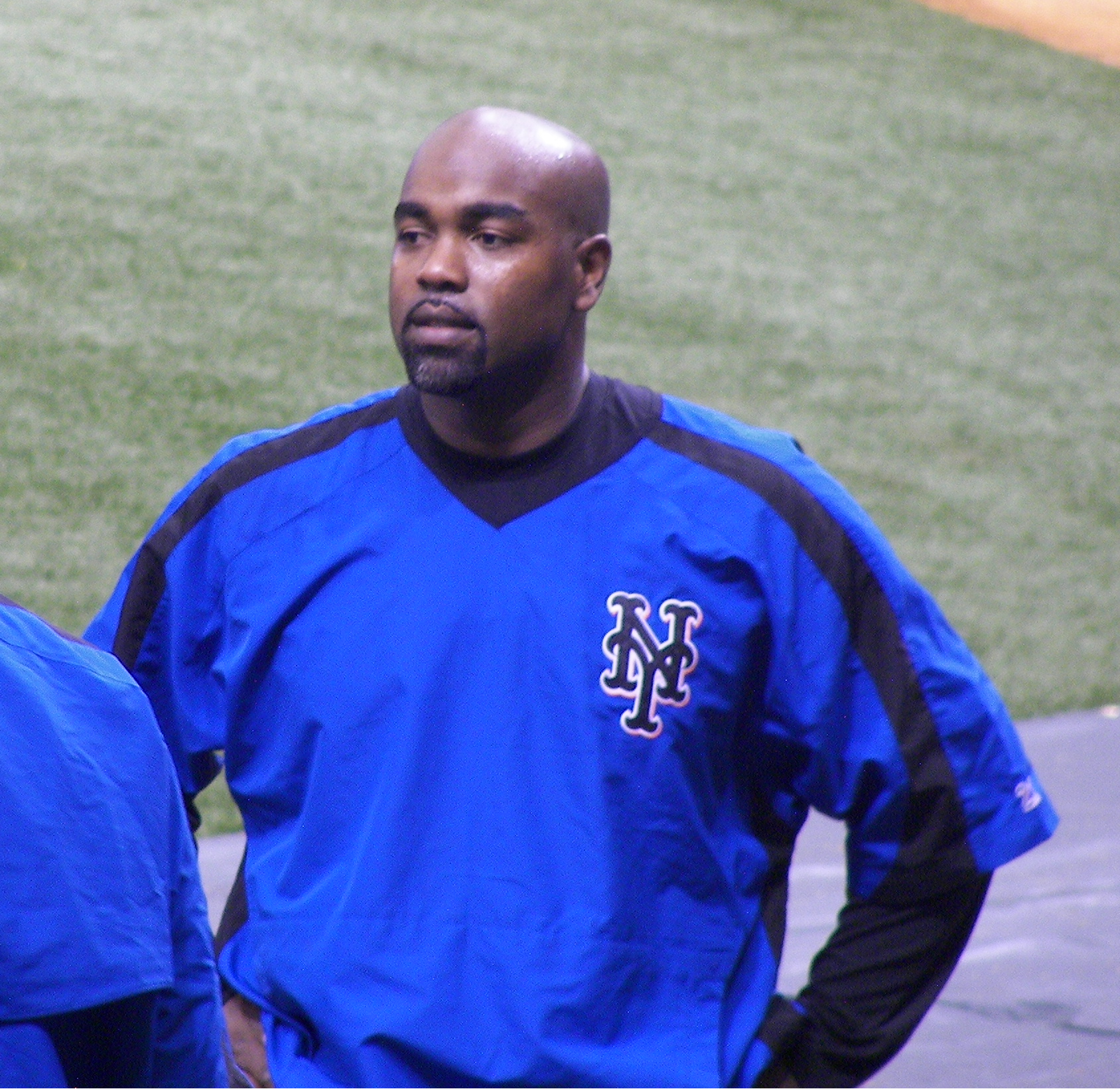 Carlos Juan Delgado Hernández (born June 25, 1972 in Aguadilla, ) is a for the . He began his Major League career with the . With over 450 s, he holds the all-time home run and RBI records among Puerto Rican players.

Delgado was born to Carlos "Cao" Delgado and Carmen Digna Hérnandez. He grew up in the "El Prado" section of Aguadilla.

Carlos attended Agustín Stahl Middle School and José de Diego High School, from which he graduated in 1989. Delgado has expressed his strong feelings of pride in being an "Aguadillano", noting everything he holds dear is found in the municipality, and his off-season house is located there. He developed friendships with several of the town's inhabitants, with whom he began playing baseball in the little leagues. Delgado married Betzaida García who is also from Aguadilla.

In his senior year, several Major League organizations (, , , Texas Rangers, and ) saw his potential and attempted to sign him. He chose the Blue Jays, and made his Major League debut with the team during the 1993 season. Though he didn't play in the , he was awarded a World Series ring.

Originally a , he switched to first base and became one of the most productive s in the Major Leagues. A two-time All Star, in 2000 and 2003, Delgado holds several Blue Jays single-season and career records. He won the Hank Aaron and "The Sporting News'" Player of the Year awards in 2000, and the in 1999, 2000, and 2003. Delgado is only the fourth player in Major League history to hit at least 30 home runs in 10 consecutive seasons, and he amassed 100 RBI or more in seven of his ten full seasons.

Following the 2004 season, Delgado became a , and was pursued by the , , , and Texas Rangers. The Blue Jays were not interested in re-signing him, due to payrollconstraints.

Following the 2005 season, the Marlins performed one of their periodic salary-cutting manoeuvers. In the "market correction," they unloaded some of their higher paid players. On November 23, 2005, the Marlins sent Delgado and $7 million to the Mets for Mike Jacobs, and Grant Psomas.

Delgado responded well as the feared cleanup hitter for the Mets, hitting 38 home runs and driving in 114 runs. With Delgado hitting between fellow Puerto Rican and star third baseman David Wright, the Mets had the best record in the National League in by|2006, but lost to the in the NLCS, 4-3. At season's end, with 407, Delgado was tied with for 41st place for lifetime home runs.

Carlos Delgado had early struggles in the 2007 season, with his falling below .200 in April. His numbers improved as the season progressed. On May 9, 2007, he hit a home run into during a game against the , becoming the only visiting player to have hit three splash home runs at . Delgado ended the season tied with for 37th place on the all-time career home run list with 431.

On August 21, 2008 against the , Delgado went 5 for 5 with 3 singles, 3 RBI, a double, and a walk-off RBI single scoring David Wright in the bottom of the ninth off the glove of left fielder . It was the first time he had gone 5 for 5 in 10 years. The Mets swept a three games series from the Braves.

On August 25, 2008 against the , Delgado fired two 3-run homers, one to left field and the other to deep center field, to take the Mets to victory in the finale of the series 9-1. [cite book| title=Dos jonrones y seis RBI’s para Delgado| publisher=""| language=Spanish| chapter=Deportes| date=]

On September 7, he became the third Mets player in history to have at least 65 RBIs in a 65 game stretch during a season.

On September 9, he tied 's record of most multi home run games during a season as a Met with 7.

Delgado notched his 2,000th career hit on September 21, 2008 against the Atlanta Braves.

Like his hero, , Delgado is a well-known humanitarian and peace activist, and has been open about his political beliefs. As part of the , Delgado was actively opposed to the use of the island of as a bombing target practice facility by the , until bombing was halted in 2003. He is also against the occupation of Iraq. In the 2004 season, Delgado protested the war by silently staying in the dugout during the playing of "" during the . Delgado does not make a public show of his beliefs, and even his teammates were not aware of his views until a story was published in July 2004 in the "". Delgado was quoted as saying "It’s a very terrible thing that happened on September 11. It's (also) a terrible thing that happened in and , ... I just feel so sad for the families that lost relatives and loved ones in the war. But I think it's the stupidest war ever." The story was the subject of a media frenzy, mostly in New York, where on July 21, 2004, as was anticipated, Delgado was booed (by Yankee fans) for his passive protest during a game at [ [http://www.msnbc.msn.com/id/5481503/ Yankee fans boo Delgado for Iraq war protest - Baseball - MSNBC.com ] ] . When Delgado lined out in the top of the seventh inning, Yankee rooters chanted "USA, USA" even though Delgado is a U.S. citizen. Delgado had explained that the playing of "God Bless America" had come to be equated with a war in which he didn't believe. In a "New York Times" interview, Delgado said this is what he believed in, and "It takes a man to stand up for what he believes."

After being traded to the Mets, in a conciliatory measure, Delgado now stands during the singing of "God Bless America."

Among other charity work, Delgado is well-known for his generous visits to hospitals in his hometown where, on Three Kings Day, he brings toys to hospitalized children. In 2006, he joined Puerto Rico's Senate President in co-sponsoring a massive Three Kings gift-giving effort in the town of . Delgado started his own , "Extra Bases" to assist island youth. In 2007, Delgado purchased (and gave away as a gift) video conference equipment to allow his hometown's Buen Samaritano Hospital to establish a regular link with a hospital in in order to allow for remote diagnoses through .

For his efforts, Delgado was awarded the in 2006. The award goes to the player in baseball who best exemplifies humanitarianism and sportsmanship, and was named after Hall of Famer in 1973. Prior to the 2008 season of the LBPPR, Delgado was involved in a initiative to provide economic help to the team. [cite web| url=http://www.primerahora.com/noticia/beisbol/acciondeportiva/delgado_tendra_la_carta_de_garantia_que_solicito/204378| title=Delgado tendrá la carta de garantía que solicitó| publisher=Primera Hora| language=Spanish| date=| accessdate=2008-06-27]

small|Roll over stat abbreviations for definitions. Stats through September 28, 2008.

Through 2006, Delgado is the all-time leader for interleague play RBI with 131, and second all-time in home runs with 43.

Delgado is the most recent player to hit 4 home runs in a game. His immediate predecessor is , a former teammate with both the Blue Jays and the Mets, and a close friend.

* [http://www.thenation.com/doc/20051219/zirin The Silencing of Carlos Delgado] An article about Carlos Delgado's stance on the Iraqi War in the The Nation