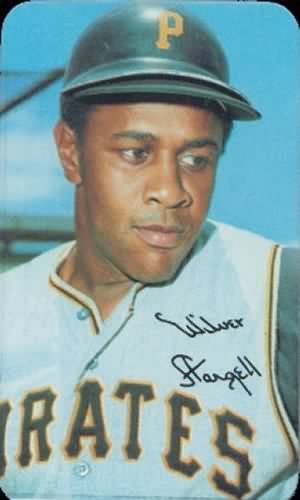 Wilver Dornell "Willie" Stargell (, &ndash; , ), nicknamed "Pops" in the later years of his career, was a professional baseball player who played his entire Major League career (1962-1982) with the as an and .

Stargell was born in Earlsboro, , but later moved to where he attended . He was signed by the Pirates at age 18, and made his Major League debut at the end of the 1962 season. He soon became a standout player, making his first of 7 trips to the All-Star Game in 1964.

In 1973 Stargell achieved the rare feat of simultaneously leading the league in both doubles and homers. Stargell had more than 40 of each; he was the first player to chalk up this 40-40 accomplishment since in 1940; other players have done so since (notably , the only 50-50 player). Beloved in Pittsburgh for his style of play and affable manner, Stargell was known for hitting monstrous home runs, including 7 of the 16 balls ever hit completely out of and several of the upper-tier home runs at its successor, . At one time, Stargell held the record for the longest homer in nearly half of the National League parks. Standing 6 feet 2 inches, Stargell seemed larger, with his long arms and unique bat-handling practice of holding only the knob of the bat with his lower hand combining to provide extra bat extension, Stargell's swings seemed designed to hit home runs of the Ruthian variety. When most batters would use a simple lead-weighted bat in the , Stargell took to warming up with a , adding another layer of intimidation. While standing in the , he would windmill his bat until the pitcher started his windup.

He was the only player to ever hit a ball out of twice; only four home runs have ever left the premises at . Stargell's first came on , 1969 off Alan Foster and measured 506 feet—to date, the at Dodger Stadium. The second, on , 1973 against , measured 493 feet. Dodger starter said of Stargell, "I never saw anything like it. He doesn't just hit pitchers, he takes away their dignity."

Stargell hit the first home at in the first game played at that arena on April 17, 1964.

In 1978, against Steve Rogers of the , Stargell hit the only fair ball ever to reach the upper deck of Olympic Stadium. The seat where the ball landed has been since painted in yellow, while the other seats in the upper deck are red. Stargell also hit the longest home run ever hit at . The spot where the ball landed was later marked with a yellow star, with a black "S" inside a white circle. After Stargell's death, the white circle was painted black and remained visible until the stadium's 2004 demolition.

, the colorful longtime Pirate radio announcer would greet a Stargell home run with the phrase "Chicken on the Hill". This referred to Stargell's ownership of a chicken restaurant in Pittsburgh's Hill District. For a time, whenever he homered, Stargell's restaurant would give away free chicken in a promotion dubbed "Chicken on the Hill with Will".

Stargell also originated the practice of giving his teammates "stars" for their caps during the 1978 season. Upon a good play or game, Stargell would give fellow players an embroidered star to place on their caps, which at the time were old-fashioned pillbox caps. These stars became known as . The practice began in the turbulent 1978 season, when the Pirates came from 12 games behind the Philadelphia Phillies to challenge for the division title. In the bottom of the first inning of the season's penultimate game, Stargell belted a grand slam to give the Pirates a 4-1 lead. After Pirates had relinquished the lead, Stargell sparked a five-run rally in the bottom of the ninth inning, but the Pirates came one run short and were eliminated. Stargell called that 1978 team his favorite team ever, and predicted that the "family" would win the the following year.

The Pirates did just that in 1979, in a fashion similar to the way they had ended the 1978 season: from last place in the NL East at the end of April, the Pirates clawed their way into a first place battle with the during the latter half of the season, exciting fans with numerous come-from-behind victories along the way (many during their final at-bat) to claim the division pennant on the last day of the season. And Stargell led all the way. At his urging as captain, the team adopted the Sister Sledge hit song "We Are Family" as the team anthem. Then his play on the field inspired his teammates and earned him the MVP awards in both the NLCS and the World Series. Stargell capped off the year by hitting a dramatic home run in Baltimore during the late innings of a close Game Seven to seal a Pirates championship. That World Series victory made the Pirates the only franchise in baseball history to twice recover from a three-games-to-one deficit to win a World Series (in 1925 against the Washington Senators; in 1979 against the ).

In addition to his NLCS and World Series MVPs, Stargell was named the co-MVP of the 1979 season along with St. Louis' ). Stargell is the only player to have won all three trophies in a single year. He shared the "" magazine's "Sportsmen of the Year" award with NFL , who also played at , for the .

Pirates manager said of Stargell, "Having him on your ball club is like having a diamond ring on your finger." Teammate once said, "If he asked us to jump off the , we would ask him what kind of dive he wanted. That's how much respect we have for the man."

Some observers believe Stargell's career total of 475 home runs was depressed by playing in whose deep left-center field distance was 457 feet. Hall of Famer estimated, perhaps generously, that Stargell hit 400 fly balls to the warning track in left and center fields during his eight seasons in the park. boosted Stargell's power numbers. In his first full season in the Pirates' new stadium, 1971, Stargell led the league with 48 home runs. He won one other home run title, in 1973, his best season he hit 44 home runs and 119 RBI as well as a .646 slugging percentage.

After retirement, Stargell spent several years as a coach for the . While working for the Braves, he heavily influenced a young . He was inducted into the in 1988, his first year of eligibility. In 1999, he ranked 81st on ""' list of the 100 Greatest Baseball Players, and was also nominated as a finalist for the All-Century Team. Stargell was the last person to throw out the first pitch at Three Rivers Stadium. He died of a in , in 2001, on the same day that a larger-than-life statue of him was unveiled outside the Pirates' new stadium, .

His autographic suggests that he preferred "Wilver" to "Willie", and Dodgers broadcaster typically called him "Wilver Stargell".

On April 9, 2001, Stargell died from complications related to a stroke. According to officials at New Hanover Regional Medical Center in Wilmington, N.C., where he died, Stargell had been suffering for years from a kidney disorder.

* "The (umpire) says 'play' ball, not 'work' ball."
* "Trying to hit was like trying to drink coffee with a fork." [http://espn.go.com/classic/biography/s/koufax_sandy.html]
* "Throwing a for a strike is like throwing a butterfly with hiccups across the street into your neighbor's mailbox."
* "They give you a round bat and they throw you a round ball and they tell you to hit it square." ( and have also been credited with similar versions of this quote.)
* "Now I know why they boo Richie () all the time. When he hits a home run, there's no souvenir." (Allen, also well known for mammoth home runs and not very beloved by fans, had hit a ball over the left-center field roof of Philadelphia's .)
* (After winning a game in 1979 against the with a pinch RBI single after a disputed check-swing call) "Maybe it was this black bat I used. Or this black shirt or my black arms that made the Reds think they saw something."
* "Now when they walk down the street, the people of can say that we come from a city that has nothing but champions!" (Stargell during the celebratory parade in the city after the , that year Pittsburgh won both their fourth Super Bowl and second World Series of the seventies. This quote is attributed to the creation of one of Pittsburgh's nicknames: "The City Of Champions")