Johnnie B. "Dusty" Baker, Jr. (born June 15, 1949 in Riverside, California) is a former player and current manager in Major League Baseball, currently the manager of the Cincinnati Reds.[1] He enjoyed a 19-year career as a hard-hitting outfielder, mostly with the Atlanta Braves and Los Angeles Dodgers. He managed the San Francisco Giants (leading them to the 2002 pennant) and the Chicago Cubs before taking his current job with the Reds.

Before he was drafted by the Atlanta Braves in the 1967 amateur draft out of Del Campo High School near Sacramento, California, Dusty Baker began his professional baseball career as an outfielder for the Braves in 1968. After spending sixteen full seasons with the Atlanta Braves, Los Angeles Dodgers, as well short tenures with both the San Francisco Giants, and Oakland Athletics, Baker finished his prosperous career as a player with a .278 batting average, 242 home runs, and 1,013 runs batted in. Furthermore, a few of Baker’s accomplishments as a player include playing for the National League All-Star team in 1981 and 1982, winning three League Championship series in 1977, 1978, and 1981. Baker ultimately won a World Series title in 1981 with the Dodgers. However, Baker played poorly during the series and did not contribute much to the Dodgers winning cause batting only .167 with an OBP of .192.[2] When he hit his 30th homer on the last day of the 1977 season, it enabled the Los Angeles Dodgers to become the first team ever to have four 30 home run hitters (Reggie Smith, Ron Cey, and Steve Garvey were the others) in one season. Baker also earned a spot as a footnote in history. On April 8, 1974, Baker was on deck when Hank Aaron hit home run 715 to pass Babe Ruth in career home runs. (He said he hit a double "That nobody saw and nobody cared" in that at-bat.) Baker played his final season in 1986.

Baker was inducted into the Sac-Joaquin Section's Hall of Fame class in 2010 for his play at Del Campo.[3]

Many believe that Baker played an integral part in the first ever high five, which occurred between Baker and Dodgers teammate Glenn Burke on Oct. 2, 1977 in Dodgers Stadium.[4]

It was the last day of the regular season, and Dodgers leftfielder Dusty Baker had just gone deep off the Astros' J.R. Richard. It was Baker's 30th home run, making the Dodgers the first team in history to have four sluggers – Baker, Ron Cey, Steve Garvey and Reggie Smith – with at least 30 homers each. It was a wild, triumphant moment and a good omen as the Dodgers headed to the playoffs. Burke, waiting on deck, thrust his hand enthusiastically over his head to greet his friend at the plate. Baker, not knowing what to do, smacked it. "His hand was up in the air, and he was arching way back," says Baker, now 62 and managing the Reds. "So I reached up and hit his hand. It seemed like the thing to do."[4]

Baker's coaching career, ironically, started with his former Dodger arch-rival: the San Francisco Giants. Baker began his coaching career as a first base coach for the San Francisco Giants in 1988, and then spent the following four years (1989–1992) as the hitting coach, and finally became the manager in 1993, replacing the departing Roger Craig. In his very first year as Giants manager, he won the N.L. Manager of the Year award, leading the team to a 103–59 record, which was the second-best record in baseball that year (behind the 104–58 Atlanta Braves), and 31 games better than their 72–90 finish the previous year. His Giants went on to win division titles in 1997 and again in 2000; Baker would win Manager of the Year honors in both of those years as well. In 2002, his Giants gained the Wild-Card berth and from there advanced to the World Series, where they lost in seven games to the Anaheim Angels who were managed by his former Dodger teammate, Mike Scioscia. It was during his San Francisco tenure that the term "Dustiny" was coined by former Giants pitcher Rod Beck. Despite Baker’s success in San Francisco, the Giants let him leave to manage the Chicago Cubs and hired Felipe Alou to replace him.

To date, Baker is one of only three African Americans to manage a World Series team. Cito Gaston was the first, managing the Toronto Blue Jays to the championship in the 1992 and 1993 World Series. Ron Washington has since joined Gaston and Baker by managing the Texas Rangers to the 2010 and 2011 World Series. 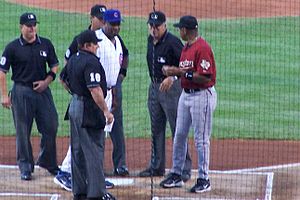 Baker meeting with Cecil Cooper of the Houston Astros prior to a 2006 matchup at Wrigley Field.

Baker made a major impact with the Cubs in his first season as manager for the ball club. With the help of an impressive pitching staff and big gun batters such as Sammy Sosa and Moisés Alou, the Chicago Cubs were able to claim their first divisional title in over a decade. However, the Cubs’ hopes for winning a World Series title were cut short during the 2003 National League Championship Series against the Florida Marlins. The Marlins would go on to claim the 2003 World Series.

Following the 2003 season, Baker and the Cubs failed to see another playoff berth. In 2004, the team was involved in a heated wild card chase with the Houston Astros, but fell out of contention near the season’s end. In the subsequent season, the Cubs lost several of their key players, most notably ace pitchers Mark Prior and Kerry Wood, to injuries. The team finished the season with a 79–83 record, marking the first time in three years that the Cubs finished with a losing record. The Cubs’ performance declined in the next season, as they fell to 66–96, and finished last in the entire National League.[5]

While the Cubs’ organization stated that Baker would remain the team’s manager throughout the 2006 season, they did not renew his contract. They allowed Baker to address the media in a press-conference in early October, where he officially announced his departure. The Cubs turned to Lou Piniella to replace Baker for the 2007 Chicago Cubs season. 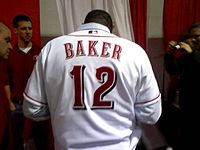 On October 13, 2007, Baker was hired as manager of the Cincinnati Reds, replacing interim manager Pete Mackanin. 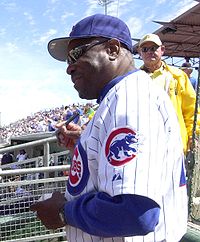 Dusty Baker during his days with the Chicago Cubs.

Baker, an old-school baseball traditionalist, was scrutinized for the Cubs’ declining productivity. To sabermetricians, many of his methods were puzzling, such as his tendency to put players with a poor on-base percentage, such as Neifi Perez, Jose Macias, Juan Pierre, Corey Patterson, Willy Taveras, Jerry Hairston Jr, and Orlando Cabrera at or near the top of his lineups. Baker rejected (and still rejects) the on-base percentage statistic, arguing that extra baserunners simply "clog up the bases" unless they can run well.[8] This flies in the face of statistically-oriented baseball strategy and has made Baker a frequent target among the sabermetric community. Additionally, many fans, commentators, and writers blamed his tendency to overuse pitchers and for damaging the careers of Robb Nen, Kerry Wood, Mark Prior and Edinson Volquez, earning him the nickname "Widowmaker." Less dramatic cases include Shawn Estes, Bill Swift, John Burkett, Mark Leiter, Kirk Reuter and Aaron Harang. Wood and Prior, along with Edinson Volquez of the Reds, all suffered serious arm injuries following their first full seasons under Baker. Wood and Prior averaged 122 and 126 pitches per start, respectively, in their final six regular-season starts of 2003.[9] Baker is widely known as a "player's manager,"[10][11] attempting to mollify his athletes rather than focusing on team output, and favoring his favorite players regardless of their statistical output.[12] He is also known for playing unproductive veterans over prospects[13] even when his teams are out of the playoff hunt, stating a need to maintain the integrity of the playoff races.

In 2003, Baker was the subject of some controversy when he stated that "black and Hispanic players are better suited to playing in the sun and heat than white players." Dusty, defending his beliefs, later said, "What I meant is that blacks and Latinos take the heat better than most whites, and whites take the cold better than most blacks and Latinos. That's it, pure and simple. Nothing deeper than that."[14]

Baker was a member of the United States Marine Corps Reserves from 1969 through 1975.[16] Baker has a wife, Melissa, and two children named Natosha and Darren. Darren was famously rescued from being run over at home plate by J. T. Snow during the 2002 World Series.[17]