Tony Gwynn
This article is about the former MLB player and Baseball Hall of Famer. For his son, who is also an MLB player, see Tony Gwynn, Jr..

Anthony Keith "Tony" Gwynn, Sr. (born May 9, 1960), nicknamed Mr. Padre and Captain Video, is a former Major League Baseball right fielder. He is statistically one of the best and most consistent hitters in baseball history. He played his entire 20-year baseball career for the San Diego Padres (1982–2001). He was elected to the Baseball Hall of Fame on January 9, 2007 and was inducted on July 29. He is the first National League player born during the 1960s to earn the honor (Kirby Puckett was the first American Leaguer). He batted and threw left-handed.[1]

Despite playing much of his career at a "power position" (right field is known for producing sluggers) during a time when home runs were at an all-time high, he was not a home run threat, never hitting more than 17 in any one season during his major league career. Instead, Gwynn made a name for himself by being one of the most consistent contact hitters in the game's history. Gwynn hit .338 for his career and won eight National League batting titles. He struck out only 434 times in 9,288 career at-bats, and never batted below .309 in any full season.

Gwynn was selected by the Padres in the third round of the 1981 Major League Baseball Draft (the 58th player chosen overall). His uniform number was #19, which the Padres retired in 2004.

A native of Long Beach, California, Gwynn was a star baseball player at Long Beach Polytechnic High School, graduating in 1978[2] before moving on to San Diego State University.

At SDSU, Gwynn was not only an acclaimed baseball player, but also a standout point guard on the San Diego State Aztecs men's basketball team, setting a school record for assists in a season and a career.[3] Gwynn was well known for his excellent court vision and playmaking abilities. The same day the Padres drafted him, Gwynn was also selected by the San Diego Clippers in the 10th round of the National Basketball Association draft, but he elected to play baseball instead.[3]

Gwynn was noted for constantly studying his swing, always looking for ways to improve his hitting. He used a relatively small Louisville Slugger bat (model #B276C) measuring 33 inches and weighing just 30½ ounces, far smaller than those of his contemporaries, such as five-time American League batting champion Wade Boggs, who used Louisville Slugger's #B439 model. Gwynn began using the smaller bats while playing his first season of professional ball for San Diego's A-level Walla Walla Padres minor league club in 1981 because he was having trouble adapting to wood bats and wanted something of a similar weight to the aluminum bats he used in college.

Even though Gwynn was batting .360 at the time, he felt that the larger bats were hampering him because he had to choke up so far — and his first major league hit, on July 19 against Philadelphia Phillies pitcher Sid Monge, was a double. In the aftermath, Phillies first baseman Pete Rose, at the time second in career hits and aware of how well Gwynn hit in the minors, came up to the new Padre and told him, "Don't try to catch me in one night." The 1982 season would be the only one of Gwynn's career in which he would hit below .309. He would go on to play in two World Series, one in 1984 and again in 1998.

After a winter ball wrist injury, Gwynn struggled in the second half of 1983, sinking as low as .229 by July 29. It was then that he began using video recording to review his at-bats. He heated up to a .309 average for his shortened season; he would only hit that low again once, in 1990. Gwynn's breakthrough season was 1984, when he hit .351 and won the first batting title of his illustrious career. That season, the Padres won the first National League pennant in team history, defeating the Chicago Cubs in the National League Championship Series before losing the World Series to the Detroit Tigers. Gwynn batted .368 in the NLCS, but was less effective in the World Series, in which he made the final out by flying out to Tigers left fielder Larry Herndon.

Gwynn was also a good baserunner in his early years. In 1987, he tied an NL record with five stolen bases in a game, and he had 319 steals in his career. He became proficient with a glove for most of his career, winning five Gold Glove Awards from 1986 to 1991 despite playing much of his career with knee problems. Over time, his left knee became the more troublesome, and Gwynn has had several operations on both to halt the deterioration of the joints.

Primarily a center fielder as of 1984, in 1989 Gwynn split time between right field and center fields, while winning his third Gold Glove.

In 1994 Gwynn batted .394, the highest batting average in the National League since Bill Terry hit .401 in 1930 and the highest in the majors since Ted Williams hit .406 in 1941. Had the season not been shortened by a strike, Gwynn would have had the chance to become the first batter to eclipse the magical .400 mark in more than 50 years; of course, several players have hit .400 for four months, only to fade. In the end, Gwynn fell three hits short of the .400 mark in the shortened season.

In 1997, Gwynn reached career highs with 17 home runs and 119 runs batted in. The next season, Gwynn batted .321 and helped the Padres win their second pennant, as they defeated the Houston Astros and Atlanta Braves in the playoffs. However, the Padres lost the World Series to the New York Yankees in a four-game sweep, despite Gwynn's home run in the opening game against New York Yankees pitcher David Wells, and his overall batting average of .500 in the Series.

Gwynn had 135 career home runs: 74 solo home runs, 39 two-run home runs, 19 three-run home runs, and 3 grand slams (one of which was of the inside-the-park variety). 99 of his home runs came when the game was tied or the Padres were behind.

Gwynn got his 3,000th hit on August 6, 1999, with a single in the first inning off Montreal Expos pitcher Dan Smith. Coincidentally, he got his 2,000th hit, also a single, on August 6, 1993, against Colorado Rockies pitcher Bruce Ruffin. August 6 is also the birthday of Gwynn's mother. 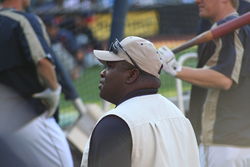 Although he had 135 career home runs, Gwynn described himself as a contact hitter who could hit to all fields. He rarely struck out (just 434 times, once every 21 at-bats) and his goal was to put the ball in play and move baserunners over. He was also an outstanding bunter.

In 1999, while still active as one of baseball's best hitters, he ranked Number 49 on The Sporting News'' list of the 100 Greatest Baseball Players, and was nominated as a finalist for the Major League Baseball All-Century Team. Despite adding to his career statistics for two more seasons until his retirement, when TSN updated their list for 2005, Gwynn had fallen to Number 57.

Gwynn retired in 2001 with 3,141 hits and a lifetime batting average of .338. His career average is the highest among players whose careers began after World War II, and fourth-highest among players whose career was entirely within the live-ball era (only Ted Williams, Lou Gehrig, and Bill Terry have higher averages in that time).[4] He played his entire career with one team, a rarity in any era, and is considered by many to be the best player to ever wear a Padres jersey. In his last game at home, the Padres honored him by stenciling "5.5" on the third-base side of the infield dirt, referencing what he called the "5.5 hole" (so named because it was in between third base, marked as the number 5 on a scorecard, and shortstop, which is position number 6) where he placed many of his hits.

Since his retirement, Gwynn has worked as a color commentator for ESPN and is the head baseball coach at his alma mater, San Diego State University. In 1997, Smith Stadium, the school's baseball facility, was extensively renovated. Then-Padres owner John Moores financed the estimated $4 million project, and at Moores's request, it was renamed Tony Gwynn Stadium.

On July 21, 2007, a 10 foot statue of Tony Gwynn was unveiled outside PETCO Park. In honor of Gwynn's long service to the Padres and the community, the address of PETCO Park is 19 Tony Gwynn Drive.

On July 21, 2007, the Padres unveiled a statue of Gwynn at the "Park in the Park" area of Petco. This statue features an engraving which reads "Mr. Padre", and includes a quote from Gwynn's father on the back. Gwynn was inducted into the Baseball Hall of Fame alongside Cal Ripken, Jr. on July 29, 2007. Ripken and Gwynn are 2 of the 46 players in the Hall of Fame who played their entire major league career for only one team. Both were elected in their first year of eligibility.

The Gwynn-Ripken induction weekend was notable for a number of attendance records, which were announced during the ceremony. 14,000 people visited the Hall of Fame Museum on July 28, a record number for a single-day. Baseball attendance for all games played on July 28 also set a single-day record. The induction ceremony also had the greatest collection of living Hall-of-Famers, 53, present for a ceremony. A record crowd estimated at 75,000 attended the induction ceremony, shattering the previous record of 25,000 in 1999. In 2002, Gwynn was also inducted by the San Diego Hall of Champions into the Breitbard Hall of Fame honoring San Diego's finest athletes both on and off the playing surface.[5] Prior to his induction into the Hall of Fame on July 20, 2007, Gwynn appeared on a Wheaties box.

Gwynn is currently the head baseball coach at San Diego State University,[3] his alma mater, and until recently was a part-time analyst for ESPN. He has recently been recruited as a Yahoo! Sports expert analyst. He often sits in for play-by-play during Padres games on San Diego's Channel 4. Gwynn has also been hired to help broadcast postseason games on TBS.

Gwynn has had three procedures to remove noncancerous growths from his parotid gland since 1997. In 2010, Gwynn was diagnosed with cancer of a salivary gland[10] and had both lymph nodes removed.[11] Gwynn attributed his cancer to his dipping tobacco habit that he had since playing rookie ball in Walla Walla in 1981.[12]