The Yankees have played home games in the current Yankee Stadium since 2009.

The New York Yankees are a professional baseball team based in the Bronx, a borough of New York City, New York. Also known as "the Bronx Bombers" and "the Pinstripers",[1][2] the Yankees play in the East Division of Major League Baseball's (MLB) American League (AL). In its 111 major league seasons, the franchise has won 27 World Series championships, the most of any MLB team and 16 more than the second-place St. Louis Cardinals.[3] The Yankees played home games in Yankee Stadium from 1923 to 2008, except for a stint at Shea Stadium from 1974 to 1975 while Yankee Stadium was undergoing renovations.[4] In 2009, the team moved into a new ballpark, which is also called Yankee Stadium.[5]

One of the American League's eight original members, the club was founded in Baltimore, Maryland as the Baltimore Orioles in 1901, and posted a 68–65 win–loss record in its first season.[6] The franchise moved to New York City in 1903 and became known as the New York Highlanders; in 1913, the team changed its name to the Yankees.[7] From 1920 to 1964, the Yankees were the most successful MLB franchise, winning 20 World Series titles and 29 AL pennants. This period included streaks of four consecutive championships from 1936 to 1939 and five straight titles from 1949 to 1953.

Following an 11-year playoff drought, the club appeared in the playoffs five times in a six-year period and won back-to-back World Series championships in 1977 and 1978. The Yankees won the World Series again in 1996, and in 1998 began a run of three consecutive Series titles. From 1995 to 2007, the Yankees made the playoffs each year; their 13-season postseason streak was the second-longest in MLB history.[8] After missing the playoffs in 2008, they won another World Series in 2009 and reached the postseason in 2010 and 2011. Overall, the Yankees' .568 regular season winning percentage is the highest of any MLB team, and they have the eighth-most regular season wins, behind seven clubs founded in the 19th century.[9]

Joe DiMaggio played 13 seasons for the Yankees and was a member of nine World Series-winning teams. 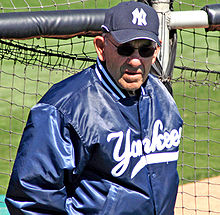 During his 19 seasons with the Yankees, Yogi Berra played on 10 World Series-winning teams.

Don Larsen threw a perfect game in Game 5 of the 1956 World Series, which the Yankees won in seven games.

Reggie Jackson played five seasons for the Yankees, and helped them win the World Series in 1977 and 1978. 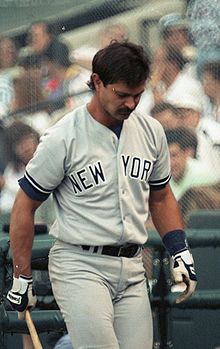 Don Mattingly was selected to six All-Star Games in his 14-year career.

Derek Jeter, the current captain of the Yankees, has led the team to five World Series titles. 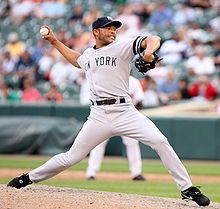 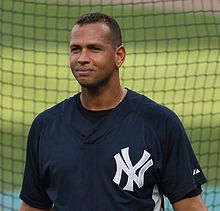 Alex Rodriguez, who was named Most Valuable Player in 2005 and 2007 while playing for New York, was a member of the Yankees' 2009 World Series-winning team.

These statistics are from Baseball-Reference's New York Yankees History & Encyclopedia,[68] except where noted, and are current as of October 6, 2011.