Martinez was the first round draft pick for the Seattle Mariners in 1988 out of the University of Tampa where he starred during his time on campus. He began his Major League career in 1990 and has played for the Mariners, New York Yankees, St. Louis Cardinals, and Tampa Bay Devil Rays, and rejoined the Yankees in the 2005 season. During his 16-year MLB career, he scored 1,008 runs, drove in 1,271 runs, and hit 339 home runs. He had 100 or more RBI in six different seasons and was twice named to the All-Star team.

Tino Martinez was born and raised in neighborhood of West Tampa in Tampa, Florida. His grandfather owned a small cigar factory in which Tino, his brothers, and childhood friend and fellow future major-leaguer Luis Gonzalez worked as young boys [1]. Tino attended St. Joseph School in West Tampa until 8th grade, then attended Tampa Catholic High School for 9th and 10th grade before transferring to Jefferson High School for his final two years of high school. After graduation, he enrolled at the University of Tampa. All during his youth, Martinez excelled on various baseball squads from little league all the way through college.

Martinez, along with other future Major Leaguers Jim Abbott and Robin Ventura, won a gold medal at the 1988 Summer Olympics in Seoul, South Korea, the seventh time that baseball was part of the Olympic Games and its last year as a demonstration sport. In the final game, Martinez belted two homers and drove in four runs and Abbott pitched a complete game, leading the USA to a 5-3 win.

The Seattle Mariners drafted Martinez in 1988. Martinez began his career playing under Lou Pinella, who had also grown up in the West Tampa neighborhood and knew his uncle and mother. Martinez had several mediocre seasons, but broke out in 1995 when he drove in 111 runs, hit 31 home runs and batted .293. The Mariners clinched the AL West and went on to play in the first season of divisional post season play against the New York Yankees. 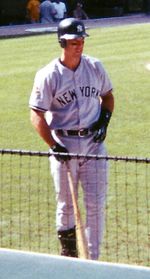 Following that season, he was acquired in a trade by the New York Yankees, along with Jeff Nelson and Jim Mecir, for Sterling Hitchcock and Russ Davis. Martinez was the key to the trade, as he was chosen as the successor for legendary Yankees first baseman and team Captain Don Mattingly.[2]

Martinez helped lead the New York Yankees to World Series championships in 1996, 1998, 1999, and 2000. He also won the Home Run Derby in 1997.[3] Martinez hit two memorable home runs as a Yankee in the World Series. The first came off Mark Langston in Game 1 of the 1998 Series. The Yankees had tied the game earlier in the inning with a Chuck Knoblauch 3-run home run. The following three batters got on base, and Martinez came to the plate. After taking a very close ball 3, he hit a grand slam into the upper deck on a 3-2 count, giving the Yankees a four run lead. The second came on October 31, 2001. With two outs in the 9th inning and the Yankees trailing by two runs, Martinez came to the plate with a runner on. He hit a home run to right center off Arizona Diamondbacks closer Byung-Hyun Kim. The feat was repeated the following night by Scott Brosius. However, the Yankees would lose Games 6 and 7 and thus, the series.

His best season statistically came in 1997, when he was second in the American League in home runs and RBI (with 44 and 141 respectively), and finished second in AL Most Valuable Player voting. In 1998, he was hit in the upper back by Orioles pitcher Armando Benitez, which resulted in a huge brawl between the two teams.

In the 2001 World Series, Martinez's Yankees faced off against the Arizona Diamondbacks. The series went to Game 7, which Arizona won when Luis Gonzalez, Martinez's best friend, hit a game winning single off Yankee closer Mariano Rivera in the bottom of the 9th inning. Gonzalez later recalled that when he went back home to check his answering machine, the first message of congratulations was from Martinez.[4]

During most of his time with the Yankees, Martinez resided in Tenafly, New Jersey.[5]

After the 2001 season when the Yankees elected to sign Jason Giambi, Martinez went on to play for the St. Louis Cardinals for two seasons, once again replacing an aging legendary first baseman, Mark McGwire. His production during these three years declined, and he went through several prolonged slumps.

One of his most memorable moments during this tenure with the Cardinals came when he returned to Yankee Stadium during Interleague play. An emotional Martinez was driven to tears when he went to bat as he was given a standing ovation by the Yankee fans who appreciated the integral part he played during the team's last dynastic run. In the second game of the three game series, Martinez hit 2 home runs off former teammate Andy Pettitte to a loud thunderous ovation both times. The Yankee fans cheered him for a curtain call, a rare occurrence in honor of a visiting team's player.

The Cardinals eventually traded Martinez to the Tampa Bay Devil Rays when they decided to have Albert Pujols switch from left field to first base.

From home in Tampa to "home" in New York again

Martinez eventually returned to his hometown with the Tampa Bay Devil Rays in 2004 where he was reunited with Lou Pinella. Martinez hit 23 home runs while serving as a mentor for the team's many young players. His family lived just minutes from the Tropicana Field and he was popular with the Devil Rays fans.

Martinez returned for a second tour of duty with the Yankees for the 2005 season. From May 7, 2005 to May 11, 2005, Martinez hit 5 home runs in 5 straight games, which is one more than his previous record set from June 27, 2001 to July 1, 2001. While held homerless on May 12, 2005, Tino hit two homers on May 15 to give him 8 HR in 8 games. On November 8, 2005, the Yankees declined their $3 million option on Martinez, making him a free agent. On Wednesday February 15, 2006 he officially decided to end his playing career. Martinez confirmed the decision in the St. Petersburg Times, telling the paper that he will begin his broadcasting career at ESPN. Martinez said that the offer from ESPN made his decision to retire a lot easier, as he would work on Baseball Tonight, do some radio work, and broadcast a few games.

In 2008, Martinez agreed to be a special instructor for the Yankees to help their first basemen with defensive skills.[6] After Spring Training, he was named Special Assistant to the General Manager.[7]

Starting in Spring Training 2010, Martinez became a color commentator for the YES Network, replacing the departed David Cone.[8] He made his regular season debut on April 9, 2010, when he called a game between the Yankees and the Rays that was coincidentally played back in his home area of Tampa Bay.

Prior to the 2004 Summer Olympics Games, the host nation Greece, trying to build up their chances of winning a medal, decided to put together team of North American baseball players of Greek heritage. Martinez, having some Greek ancestry, was approached by the Greek Olympic team manager Rob Derksen and asked to play for the host nation. Martinez, along with fellow MLB players Eric Karros and Aaron Miles, declined the offer because the games were in the midst of the Major League Baseball season.[9]

Tino has been married to the former Marie Prado since 1991. They have three children: Olivia, Tino Jr. (TJ), and Victoria. The family currently resides on Tampa's Davis Islands.

The premiere of Yankeeography: Tino Martinez appeared in early May 2006, on the YES Network.

On April 2, 2007, Martinez received the 2007 Pride of The Yankees Award at the New York Yankees Homecoming Banquet.

In 2008, during the final season of the old Yankee Stadium, Tino Martinez participated in his first Old Timer's Day. In a Yankees vs Orioles preseason game on March 13, 2010, it was mentioned by Yankees play-by-play announcer, Michael Kay, that Tino is a fan of the Tampa Bay Buccaneers, and is also a season ticket holder.

Tino also participates annually in a golf tournament in Tampa.

Tino participated in the Yankees' 2011 Old Timer's Day on June 26, 2011, where he was given one of the loudest ovations. Tino came up to the plate during a scoreless game with his former teammate, Bernie Williams on second base after hitting a double. Tino hit a 2 run homer off of former teammate David Cone. The stadium erupted as Tino gave his team the lead just like old times. These were the only runs of the game and Tino once again led his team to victory as the Bombers defeated the Clippers 2-0.