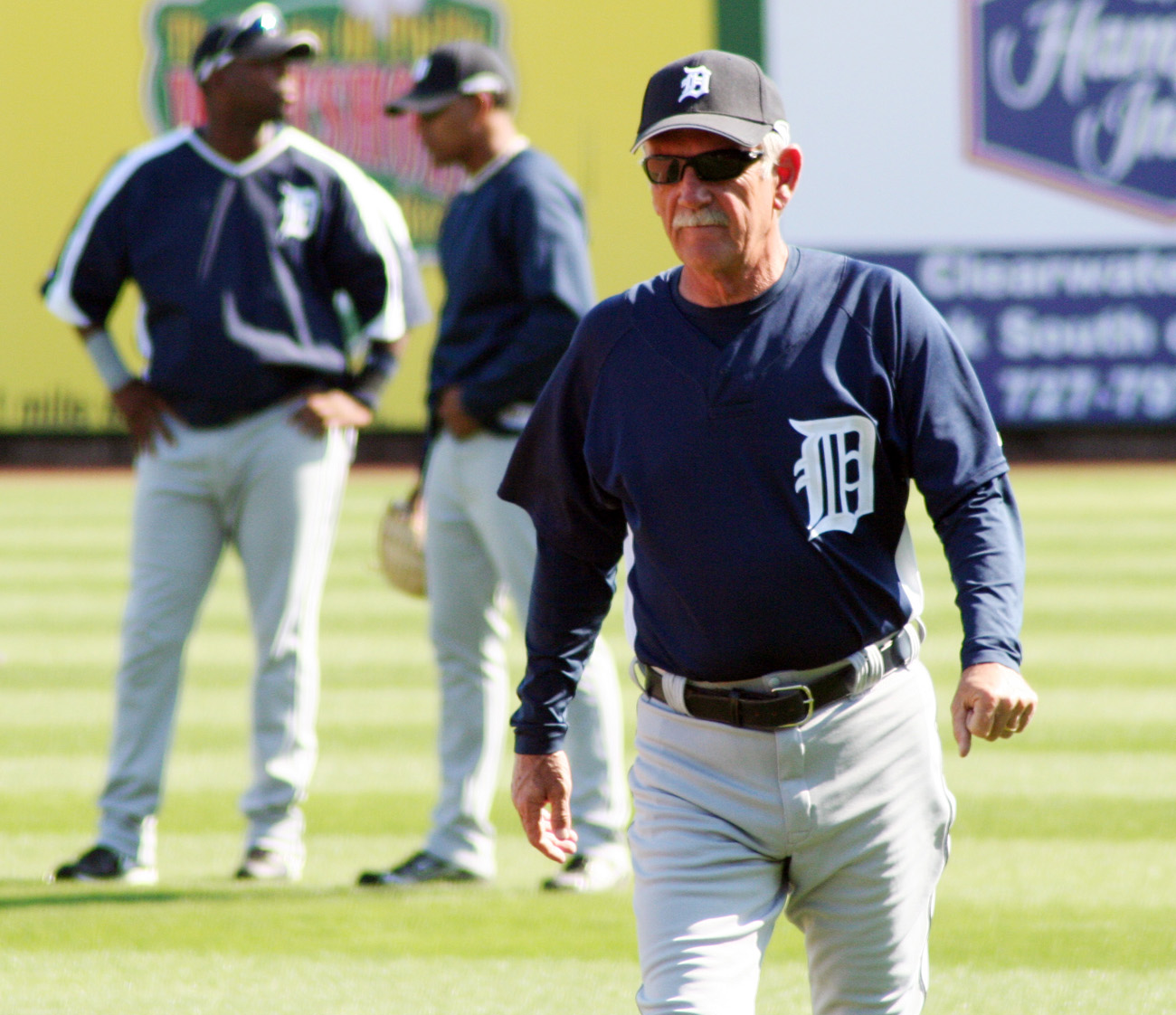 Jim Leyland began his baseball career with the Tigers when they signed him as a on September 21, by|1963. He spent six seasons as a minor leaguer in the Tigers organization (1964-69) before serving as a coach with the in 1970. Leyland then served as a coach for the in the first half of the 1971 season before receiving his first managerial experience with the Bristol Tigers the same season. He managed for 11 seasons at the minor league level in the Tigers organization (1971-81), advancing to the postseason six times and claiming his respective league championship three times. Leyland was selected as the manager of the year in the in both 1977 and 1978 and in the American Association in 1979.

Leyland left the Tigers organization for the first time in 1982 when he became 's third base coach for four seasons (1982-85) with the , including the team's by|1983 AL West division title, before being named the 33rd manager in history on November 20, by|1985.

He was the manager of the from by|1986 to by|1996. He won two Manager of the Year trophies with the Pirates in by|1990 and by|1992, and developed such All-Stars as , , , and in Pittsburgh before a fire sale in the mid-1990s soured him with a new ownership. Under Leyland, the Pirates went to the in three straight seasons (1990, 1991, and 1992). The Pirates lost all three of those NLCS series, however, with the latter two going the full seven games against the Atlanta Braves. Although he has moved on in his career, he still keeps his home in [ [http://www.post-gazette.com/pg/04307/405338.stm Leyland awaiting Phillies' decision ] ] , where he met his wife Katy and has raised two children, Pat and Kelly. Both currently attend Bishop Canevin High School.

In by|1997, he was hired by to manage the and promptly led them to the franchise's first championship. The Marlins, in only their fifth year of existence, became the fastest expansion franchise to win a World Series (a feat that has since been broken by the by|2001 ).Fact|date=May 2008

In the offseason, Huizenga dismantled the team in what became known as "the fire sale." After Game 7, when asked about rumors that he may retire if Huizenga sold the franchise, Leyland quipped, "My wife doesn't like me that much. I can't retire." [cite news | title=Passionate man the last of a breed | date=October 27, 1997 | accessdate=2008-06-26 | work= | first=Mark | last=Kiszla | page=C-01] Leyland indeed remained as the manager, but resigned after a terrible by|1998 season. At his press conference, Leyland remarked that he thought his job was to win championships, but that apparently wasn't what Huizenga wanted.Fact|date=May 2008 Leyland was subsequently hired by the for the by|1999 season.

When he left managing after the 1999 season, he became a Pittsburgh-based scout for the ;Fact|date=May 2008 he was often seen sitting in the stands at with fellow ex-Pirates manager .Fact|date=May 2008

In 2005, Leyland returned to the franchise with which he spent the first 18 years of his professional baseball career, managing in the AL for the first time. Following the release of as the manager of the Tigers on October 3, by|2005, Leyland was immediately named a top contender to replace him for the by|2006 season.Fact|date=May 2008 "It's well known that I interviewed with Philadelphia last winter, and I'd like to manage again," Leyland said in September 2005. He was announced as the new Tigers manager just one day later.

In the 2006 regular season, Leyland guided the Tigers to a 95-67 record, the Tigers' best season since by|1987. The Tigers entered the playoffs as a wild card, and went on to defeat the and sweep the on their way to winning the American League pennant. Many people chose the Tigers to win the Fact|date=May 2008, although they ultimately lost to the . In leading the team to the AL pennant, he became the seventh manager to win pennants in both major leagues, joining Joe McCarthy, , , , , and . After the 2006 season ended, Leyland was recognized with the award for the third time in his career. He became the third person to win the award in both leagues, joining and . Leyland also won for the American League in 2006. As of the end of the 2006 season, Leyland's career managerial record is 1164&ndash;1198, a .493 winning percentage.Fact|date=September 2008

*Jim Leyland is fairly notorious for his smoking habit (Marlboro Reds are his favorite), which he defends. Leyland is often known to smoke in the dugout during games. More recently, as smoking has been banned in many major league stadiums, he smokes on the clubhouse ramp between innings. [cite web | url=http://www.thesportstruth.com/2006/10/rainouts-may-not-bode-well-for-leyland-tigers.html | date=October 26, 2006 | title=Rainouts May Not Bode Well For Leyland, Tigers | author=Michael Stephens | accessdate=2007-04-01]
*Leyland referred to the 2006 Yankees, whom his Tigers defeated in the 2006 ALDS, as " and then Canó" because of the Yankees' strong offensive lineup.Fact|date=May 2008
*Leyland, a career .222 hitter in the minor leagues, recently quipped that he "could've been inside the Duquesne Light Company, and it wouldn't have made a difference" in regard to the impact that lighting quality between minor and major league stadiums can have on a batter. Fact|date=May 2008
*Leyland is one of the few managers in Major League Baseball to wear cleats in the dugout.Fact|date=May 2008
*Since becoming manager of the Detroit Tigers in 2006, Leyland has rarely worn a standard Tigers jersey. He seems to prefer wearing a version of the batting practice jersey in the dugout.Fact|date=May 2008
*Leyland is known to occasionally take a round of batting practice himself. [ [http://mlb.mlb.com/news/article.jsp?ymd=20070415&content_id=1900176&vkey=news_mlb&fext=.jsp&c_id=mlb Notes: Ordonez nicked up] , Jason Beck/MLB.com, April 15, 2007]
*Leyland has not selected a for his current Tigers team. , whom Leyland has known for 40 years (dating back to their time as Tigers minor leaguers), usually handles those responsibilities. If Leyland is ejected from a game, Lamont takes over the managerial duties. Lamont has also served as the third base coach under Leyland from 1986&ndash;1991, and then again in 1996 before taking over the team from Leyland in 1997.Fact|date=May 2008