Dustin Luis Pedroia (born August 17, 1983, in Woodland, California) is an American professional baseball second baseman with the Boston Red Sox of Major League Baseball. Pedroia has won several awards in Major League Baseball, including the 2007 American League Rookie of the Year and the 2008 AL MVP award. He also won a Silver Slugger as a second baseman and a Gold Glove in 2008 and 2011. He finished second overall in the AL in batting average in 2008. In addition to his offensive performance, Pedroia has been a major contributor to the Red Sox on the defensive spectrum.

Pedroia attended Woodland Senior High School in Woodland, California. Pedroia batted .445 his senior year and was chosen as his league's most valuable player.

Pedroia attended Arizona State University, where he was teammates with current Texas Rangers second baseman Ian Kinsler and current Los Angeles Dodgers right fielder Andre Ethier. Kinsler and Pedroia competed for the shortstop position. Ultimately, Pedroia stayed at shortstop, while Kinsler ended up at second base before transferring to the University of Missouri. In three years at ASU, Pedroia never hit below .347, and had a career average of .384, starting all 185 games. Furthermore, to help ASU recruit better pitchers, Pedroia relinquished the last two years of his athletic scholarship.[3] He was named ASU On Deck Circle Most Valuable Player; other winners have included Ike Davis, Willie Bloomquist, Paul Lo Duca, and Barry Bonds.[4]

Pedroia was drafted by the Red Sox in the second round of the 2004 Major League Baseball Draft, with the 65th pick overall. Pedroia, the eighth shortstop drafted, received a $575,000 signing bonus.[3]

Pedroia became the regular second baseman for the Red Sox in 2007 replacing Mark Loretta. His defense in 2007 was solid, with six errors and a fielding percentage of .990. Early in the season, though, his batting average was as low as .172 (on May 1); that average, combined with the hitting of teammate Alex Cora, hitting .316 through the end of May, left Pedroia in a platoon role. Pedroia's batting improved quickly, however: by June 18, his average was .322, aided by a 13-game hitting streak, and a five-hit game against the San Francisco Giants on June 15, 2007. Because of that production, he was named American League Player of the Week for May 28 – June 3, 2007, and AL Rookie of the Month for May 2007.[5] His most notable play of the season, though, may have been a diving stop in the seventh inning of fellow rookie Clay Buchholz's September 1, 2007 no-hitter.[6]

Pedroia won the AL Rookie of the Year award,[7] and was selected to the 2007 Topps Major League Rookie All-Star Team.[8]

Pedroia entered the 2007 American League Division Series batting .317 with 8 home runs and 50 RBI in 139 regular season games with the Red Sox. In the ALDS, Pedroia struggled, getting only 2 hits in 3 games against the Los Angeles Angels of Anaheim. Though Pedroia struggled in the lead-off spot for the Red Sox, Boston cruised past the Angels 3 games to 0 to advance to the American League Championship Series, where they met the Cleveland Indians.

In the ALCS, Pedroia heated up, batting .395. In the 7th game, Pedroia hit a 2-run homer into the Green Monster seats in the 7th inning and had 5 RBI. He then hit a 3-run double in the bottom of the 8th to help the Red Sox secure the series and a spot in the World Series.

In the World Series against the Colorado Rockies, Pedroia was one of two rookies (with center fielder Jacoby Ellsbury) starting for the Red Sox. These two rookies jump-started the Red Sox offense. In the Series' first at-bat, Pedroia hit the first pitch from Rockies ace Jeff Francis over the Green Monster, making him only the second player (after Baltimore's Don Buford in 1969), and the first rookie, to lead off the Series with a home run. In Game 3, with the Red Sox up 2-0, Ellsbury and Pedroia combined for 7 hits, 3 runs, and 4 RBI in a 10-5 Boston win. The Red Sox won Game 4 and swept the series for their seventh World Series title. Pedroia hit .278 with 5 hits, 1 home run and 4 RBI in the Series. 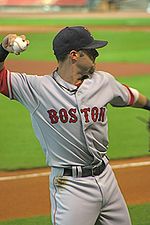 Pedroia ended the season with a .326 average with 17 home runs, 83 RBIs, and 20 stolen bases. He was tied for the MLB lead in hits with 213 and led the league in doubles (54), while leading the AL in runs scored (118), making him the first player to lead all three of those categories in the same season since Cal Ripken in 1983. Pedroia came in second in the AL in batting average (.326) behind Minnesota Twins catcher Joe Mauer (.328), fourth in the AL in total bases (322), and seventh in the AL in extra-base hits (73). His 20 stolen bases in 21 attempts helped Pedroia lead MLB in stolen base percentage (.952). With only 6 errors following the season, Pedroia won the 2008 AL MVP (the first by an American League second baseman since Nellie Fox in 1959)[9] as well as the AL Gold Glove and Silver Slugger award for second base. He is the 10th player in the history of the Red Sox to capture the AL MVP and the 8th player in AL history to win the MVP, Gold Glove, and Silver Slugger awards in the same season. Pedroia became only the third player in MLB history to win Rookie of the Year and Most Valuable Player in consecutive seasons joining Cal Ripken Jr. and Ryan Howard. Fred Lynn (1975) and Ichiro Suzuki (2001) are the only players to win both awards in the same season.

Pedroia was hitless through the first three games of the 2008 ALDS. His sole hit was an RBI double that drove in Jason Varitek in the 5th inning of game 4. He batted 2nd in all 4 games in the series, behind Jacoby Ellsbury. Pedroia made one of the best defensive plays of the series with a diving throw to first base to retire Vladimir Guerrero in the third inning of game 4. The Red Sox went on to win in dramatic fashion in the bottom of the ninth inning of Game 4 again knocking the Angels out of the playoffs.

The Angels contained Pedroia in the Division Series, but in the ALCS against the Tampa Bay Rays, Pedroia was red hot. In 26 trips to the plate in the ALCS, Pedroia collected 9 hits including three home runs and a double. However, his impressive line that included a .346 batting average and .731 slugging percentage wasn't enough to propel the Red Sox into the World Series as the rest of the team struggled to a .234 batting average against the impressive Tampa pitching staff.

Pedroia bats in the first inning against the Baltimore Orioles.

He also recorded the first Major League hit in Citi Field history when he hit a bloop double down the right field line in an April 3 exhibition game against the New York Mets. He hit a home run in his first at bat of the 2009 season. Pedroia was selected to the 2009 All Star Game on July 5.

Pedroia was selected to be the starting second baseman for the 2009 AL All Star Team. The weekend prior to the game, however, he withdrew from the team. Pedroia stated that he wanted to stay with his wife, Kelli, who was experiencing pregnancy complications with the couple's first child. The same issue had caused him to miss a regular season game prior to the All Star break.

Pedroia achieved his first multi-home run game on September 9, 2009, against the Baltimore Orioles.

For the second consecutive year, Pedroia led the American League in Runs Scored with 115 (2nd in MLB behind Albert Pujols who had 124 runs scored). He finished third in the AL / MLB with 48 doubles.

After MLB umpire Joe West made controversial statements regarding the speed of play between the Red Sox and Yankees, Pedroia responded by saying, "What he doesn't understand is that when we don't do well in these games against the Yankees, we get killed. If he doesn't want to do Red Sox and Yankee games, he should tell the umpires' union. Then when we're in the World Series, he'll be out of that assignment, too."[11]

On June 24, 2010, Pedroia went 5 for 5, with 5 RBI, and hit three home runs in a game against the Colorado Rockies that the Red Sox won, 13–11, in the tenth inning.[12] The next day, Pedroia fouled a ball off his foot in an at-bat versus the San Francisco Giants. MRI results the next day confirmed that he had a broken bone in his foot, and later was placed on the 15-Day Disabled List. Pedroia was so concerned about his fielding skills getting rusty (he was on doctors' orders not to put weight on his foot for two weeks) that he practiced fielding ground balls on his knees.[13] On July 4, 2010, Pedroia was named to be a reserve player on the American League All Star team, but did not participate due to this injury, and had former Arizona State teammate Ian Kinsler replace him on the roster.

Pedroia returned to the lineup on August 17 against the Los Angeles Angels of Anaheim, only to be put back on the DL after playing 2 games.

In an interview given to Boston, Pedroia criticized his home town of Woodland, California, calling it a "dump" and a city which never embraced him.[16] This generated backlash from his hometown and his family received death threats.[17] Pedroia later clarified his comments saying he was only joking and his comments were taken out of context.[18]

Pedroia is of Portuguese and Swiss (Maggia) heritage. Pedroia is the nephew of Eastern Michigan University defensive coordinator Phil Snow.[3]

On January 9, 2009, Pedroia was named as the cover athlete of the baseball video game MLB 09: The Show, and appeared in several commercials for the game.

Dustin Pedroia is a fan of the NBA team, the Sacramento Kings, and NFL team, the San Francisco 49ers.

Born to Play: My Life in the Game by Dustin Pedroia with Edward J. Pelaney