David Américo Ortiz Arias (born November 18, 1975), known as David Ortiz, nicknamed "Big Papi", is a Dominican American professional baseball player who is currently a free agent. Previously, Ortiz played with the Minnesota Twins (1997–2002) and Boston Red Sox (2003–2011). Ortiz is a seven-time All-Star and holds the Red Sox single season record for home runs in a regular season with 54, set during the 2006 season. In 2005, Red Sox ownership presented him with a plaque proclaiming Ortiz "the greatest clutch-hitter in the history of the Boston Red Sox".[1][2] 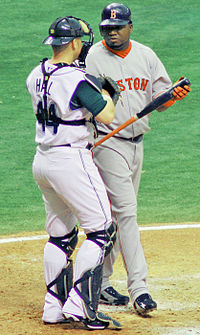 Ortiz shares a word with Toby Hall, then of the Tampa Bay Devil Rays.

Ortiz graduated from Estudia Espallat High School in the Dominican Republic and in 1992 he was signed by the Seattle Mariners who listed him as "David Arias". He played for the Wisconsin Timber Rattlers, a Mariners farm team, until 1996, when he was traded to the Minnesota Twins as the player to be named later in an earlier trade for Dave Hollins. When he arrived in Minnesota, he informed the team that he preferred to be listed as "David Ortiz."

He made his Twins debut in September 1997. For a few years, he was moved back and forth between the Twins and their minor league affiliate in Connecticut, the New Britain Rock Cats. In 2002, Ortiz hit .272 for Minnesota, with 20 home runs and 75 RBIs. The Twins advanced to the American League Championship Series that year, where they lost to the Anaheim Angels. Despite showing flashes of talent, Ortiz's time with the Twins will be remembered as a series of injuries and inconsistency both in the field and at the plate. Ortiz suffered wrist injuries in both 1998 and 2001. He continued to experience knee problems in early 2002 that plagued him throughout the season, despite hitting 32 doubles, 20 home runs and 75 RBIs in 125 games. He was released by the Twins after the season. In six seasons with the Twins, Ortiz hit 58 home runs and 238 RBI.[3]

On January 22, Ortiz signed a free agent contract with the Boston Red Sox. He played sparingly in the first two months of the season, primarily pinch hitting and starting occasionally as a DH. On June 1, manager Grady Little benched slumping Jeremy Giambi and inserted Ortiz in the starting lineup as the full time DH. In July, Ortiz hit 8 home runs and in August he had 11. He finished the season batting .288 with 31 home runs and 101 RBI. He finished 5th in the American League MVP voting.

In the postseason he struggled in the ALDS against the Oakland A's until Game 4 when he hit a 2 run double in the bottom of the 8th inning off of closer Keith Foulke to give the Red Sox the lead. In the ALCS against the New York Yankees, Ortiz had 2 home runs and 6 RBI as Boston lost in 7 games.

Ortiz was a major force in leading the Red Sox to their first World Series title in 86 years and ending the Curse of the Bambino. During the regular season, Ortiz hit 41 home runs and had 139 RBI while batting .301 with an OPS of .983. He was voted onto the All-Star team for the first time in his career. He finished 4th in American League MVP voting.

In the playoffs, Ortiz hit .409 with 5 home runs and 23 RBI. He had multiple game-winning hits to help Boston advance to and ultimately win the World Series. He hit a walk-off home run off of Jarrod Washburn to win the American League Division Series against the Angels. He then hit a walk-off home run against the New York Yankees in Game 4 of the ALCS and a walk-off single in Game 5 during the American League Championship Series. His post-season heroics earned him MVP honors for the ALCS, the first time a DH had ever been named MVP.

Ortiz was suspended for 3 games after being ejected following an incident on July 16 in a game against the Angels in which he threw several bats onto the field that came close to hitting umpires Bill Hohn and Mark Carlson.

Ortiz hit 54 home runs (setting a new Red Sox record) and had 137 RBI, while batting .287 with an OPS of 1.049. He led the American League in both HR and RBI, winning the HR crown by 10 over the 2nd-place finisher Jermaine Dye. He finished 3rd in the American League MVP voting.

On June 29, Ortiz hit his 200th career home run against Duaner Sanchez of the New York Mets at Fenway Park.

On September 21, Ortiz broke Foxx's single season Red Sox home run record by hitting his 51st home run off his former teammate, Johan Santana of the Minnesota Twins. The home run came on a 1–0 pitch in the first inning and it was his 44th home run of the season as a designated hitter, breaking his own American League single-season record.

Ortiz said he began feeling ill between games of a day-night doubleheader on August 18, 2006, against New York. Between games, he had gone home and tried to sleep but could not. Ortiz was reportedly driven to the hospital by a team assistant. An irregular heartbeat was the cause for the stress according to his doctors. Ortiz would not originally talk about his condition, but opened up to the media on August 25, reportedly saying "I'm a healthy son of a [gun]."[4]

On August 28, Ortiz had recurring symptoms from his irregular heartbeat and was a last minute scratch in the Red Sox game at Oakland. Manager Terry Francona and General Manager Theo Epstein agreed that Ortiz fly back to Boston where he was reevaluated and cleared to play again in early September.

Ortiz once again played a major role as he helped lead the Red Sox to their seventh World Series title. Despite playing the entire season with a torn meniscus in his right knee as well as nagging injuries to his shoulder and quadriceps, he finished the year hitting .332 with 35 home runs and 117 RBI. In addition, he hit 52 doubles, led the American League in extra base hits and had an OPS of 1.066.

Ortiz started slowly after suffering a wrist injury which caused him to miss several weeks. He played in only 109 games and finished the season hitting .264 with just 23 home runs and 89 RBI, his lowest totals since joining the Red Sox.

Ortiz struggled early in the season, hitting only .206 with no home runs and 30 strikeouts in his first 34 games. On May 22, Ortiz hit his first home run of the season off Brett Cecil of the Toronto Blue Jays, ending his career-high 178 homerless at-bat streak.[5] In June, Ortiz broke out of his slump by hitting 8 home runs with 22 RBIs. Ortiz had 9 HR in both July and August.

On July 9, Ortiz hit his 300th career home run against Luke Hochevar of the Kansas City Royals at Fenway Park.

On September 17, Ortiz hit his 270th career home run as a DH off of Jose Arredondo of the Los Angeles Angels breaking the all time record held by Frank Thomas.

Ortiz finished the season with 28 home runs and 99 RBI.

On April 2, Ortiz set the record for RBI by a designated hitter with 1,004 passing Edgar Martinez.

On May 21, Ortiz became only the fifth player to hit 300 home runs as a member of the Red Sox, joining Ted Williams, Carl Yastrzemski, Jim Rice, and Dwight Evans.

Ortiz was suspended for 3 games in July for his part in a brawl that took place on July 8 in a game against the Baltimore Orioles.

On October 20, Major League Baseball announced that Ortiz was the winner of the Roberto Clemente Award.

On July 30, 2009, The New York Times reported that Ortiz and then-teammate Manny Ramirez were among a group of roughly 100 major league players to test positive for performance-enhancing drugs during 2003 survey testing.[6] Five months before the Times allegations surfaced, Ortiz stated in an interview that players who tested positive for steroids should be suspended for an entire season.[6] Before the Red Sox's game that afternoon, Ortiz declined to comment on the report, saying, "I'm not talking about that anymore."[6] Afterwards, he confirmed he had tested positive and promised to speak with the media once he "[got] to the bottom of" the matter.[7]

Ten days later, Ortiz held a press conference before a game at Yankee Stadium and denied ever buying or using steroids but suggested the positive test might have been due to his use of supplements and vitamins at the time.[8] When asked which supplements he had been taking, Ortiz said he did not know.[9] Ortiz was accompanied at the press conference by the general counsel of the players union, Michael Weiner. Because the list of players who tested positive was seized as part of a government investigation and is currently under court-ordered seal pending the outcome of litigation, Weiner said the players union was unable to provide Ortiz with any details about his test result, including what substance he tested positive for.

Each time Ortiz crosses the plate after hitting a home run, he looks up and points both index fingers to the sky in tribute to his mother Angela Rosa Arias, who died in a car crash in January 2002 at the age of 46.[10] Ortiz also has a tattoo of his mother on his biceps.

Ortiz and his wife Tiffany have three children: Jessica (born October 23, 1996), Alexandra (born March 22, 2001), and D'Angelo (born July 10, 2004). Since marrying Tiffany, he has become a fan of the Green Bay Packers (his wife hails from Kaukauna, Wisconsin, a town in between the cities of Green Bay and Appleton).[11]

In April 2007, sporting goods company Reebok debuted the Big Papi 10M Mid Baseball cleat at a party in Canton, Massachusetts, home to the headquarters of Reebok International Ltd. At the party, Ortiz was quoted as saying, "Reebok's loyalty and friendship have always made me feel right at home and we are true partners in every sense of the word,... ." Ortiz first used the cleat during the 2007 MLB All Star Game in San Francisco, California.[14]

The David Ortiz Children's Fund was founded in 2007 to support a range of causes that Ortiz believes in. The Fund allows Ortiz the flexibility to donate to those children are in the most need at any given time, from Boston to the Dominican Republic and beyond. Ortiz released his own Charity Wine label in 2008 with all the proceeds going to the David Ortiz Children's Fund. The wine called Vintage Papi proceeded to raise $150,000 for charity.[15]

In April 2010, rapper and producer Jay-Z and his business partner Juan Perez initiated a trademark infringement case against Big Papi's night club 40/40 located in his native Dominican Republic. The suit claimed that Big Papi's night club name was chosen to take advantage of the fame of the record producers chain of sports clubs. The term 40/40 in baseball refers to the roughly 2 score ballplayers in the Major Leagues who have both 40 home runs and 40 stolen bases in a single season.http://latimesblogs.latimes.com/gossip/2010/04/jayz-sures-red-sox-big-papi-david-ortiz-4040-club-name.html