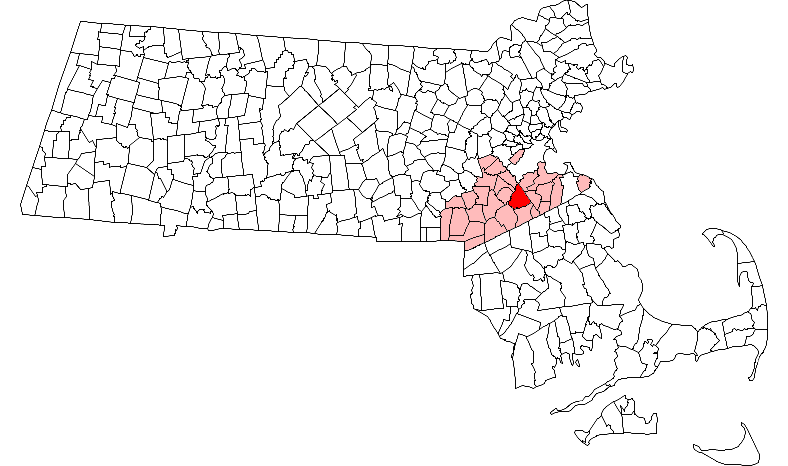 Canton was officially incorporated in 1797 from the town of . Some stories suggest that the name "Canton" comes from the early belief that Canton, China was on the complete opposite side of the earth. once had a silver smelt there, and wrote the poem entitled [http://revererollingmill.googlepages.com/cantondale Canton Dale] about his affection for the town. In fact, Joseph Warren Revere son owned the plastic factory that was recently torn down for condo/apartment development. Emerson Cuming relocated onto Washington street, a short walk from the Canton Public Library. Canton is also the birthplace of the Rising Sun Stove Polish Company founded by Elijah Morse.

Canton lies at the foot of . The flows through the center of the town, linking a chain of small lakes including Bolivar and Forge Ponds and flowing into the . The forms the boundary between Canton and its western neighbors: Norwood, Westwood, and Dedham. In addition to wooded land, the area includes wetlands, particularly in the eastern part along Route 138 near the Randolph and Stoughton, and in the western part along Route 95.

Canton has boundaries with Massachusetts towns Milton, Randolph, Stoughton, Sharon, Norwood, Westwood, and Dedham, and with the Hyde Park neighborhood of the city of Boston.

There were 7,952 households out of which 30.9% had children under the age of 18 living with them, 58.4% were married couples living together, 8.9% had a female householder with no husband present, and 30.2% were non-families. 25.4% of all households were made up of individuals and 12.3% had someone living alone who was 65 years of age or older. The average household size was 2.56 and the average family size was 3.12.

Canton has the open form of government. Annually each spring, and as necessary, the voters gather to discuss matters such as construction, schools, public works, recreational facilities, the budget, taxes and bond issues.

Property taxes on residential and other land, buildings and improvements, and transfers from the state government, are two important sources of revenue for the town.

The five elected members of the Board of Selectmen oversee the day-to-day operations of the town government.

Various organizations such as the Finance Committee and the Planning Board advise the voters at the town meeting and carry out administrative functions throughout the year.

Interstate Routes 93 and 95 (Route 128) diverge in Canton. Route 93 goes east, then north into Boston, from which it continues north into New Hampshire. Route 95 is locally a beltway that skirts Boston to the west, continues circling Boston until it is north of the city, then goes north through into . South of Canton, it leads to , , and ultimately to .

Route 138 has a with Route 93 in Canton near . From Canton, it goes north into Milton, then enters Boston in the section. South of Canton, it travels to Stoughton, continuing into , ending in Newport.

Route 24 is a divided, limited-access highway that originates at Route 93 in Randolph, just east of Canton. From there, it goes south through the easternmost corner of Canton, running roughly parallel to Route 138 as far as .

Another line branches into Stoughton, stopping at Canton Center.

Although Canton once had an airfield, it no longer does. is the closest airport to Canton. For scheduled air service, residents go to Boston's or to in Rhode Island.

*The 's Visual Arts Center, where the Mildred Morse Allen Wildlife Sanctuary is located, houses extensive collections of natural history art and photography. Public programs integrating art and nature, and changing exhibitions in the gallery, provide opportunities for visitors to view featured works from the collections. Explore Mildred Morse Allen Wildlife Sanctuary’s scenic trail system through a meadow, forest, and red maple swamp. Be sure to visit in the spring when many wildflowers are in bloom and vernal pools are filled with frogs and salamanders. In the spring and summer, look for red-tailed hawks nesting in the sanctuary. Be on the lookout for deer, fox, and coyote tracks throughout the property in the winter.
*The , a non-profit museum, is a country house designed by with garden grounds located at 2468B Washington Street (Route 138). In 1902 Dr. Arthur Tracey Cabot hired Platt to design a country house with landscaping and outlying farm buildings, with formal grounds include lawns, a , and a . In 1945, Cabot's niece, Eleanor Cabot Bradley, added ponds, a house and , and planted specimen trees. The land includes more than 60 acres of meadows and woods, with some convert|3|mi|km of walking trails.
*The world famous which sent workmen to draw extensive diagrams of in order that it could be copied is one of only three in the world. The other two are on the .
* [http://www.acambis.com/ Acambis] , one of the few smallpox vaccine producers contracted by the , makes its vaccine at the Shawmut Industrial Park in Canton. In the many months after , units were stationed around the factory and now the Canton Police has a regular patrol of the park.