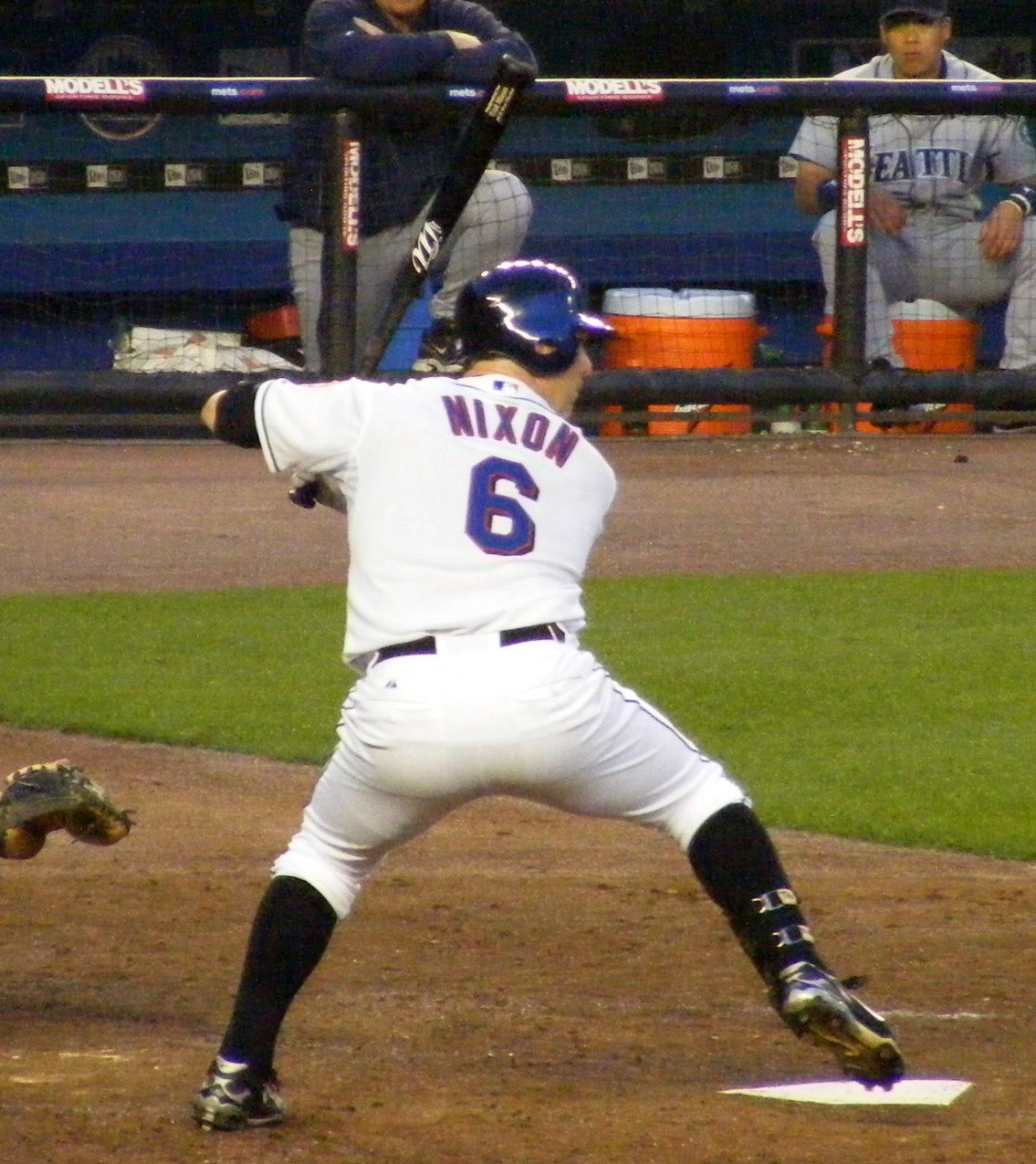 Christopher Trotman "Trot" Nixon (born , in city-state|Durham|North Carolina) is a for the . He is best known as a member of the from mlby|1996–mlby|2006. He was drafted by the Sox in the 1st round of the by|1993 amateur draft, and was the seventh pick overall. He bats and throws .

Trot had a career-best year in mlby|2003 when he batted .306 with 24 doubles and 28 home runs. In game 3 of the , Nixon was called from the bench as a in the bottom of the 11th. With the Red Sox facing elimination, Nixon lined a two-run homer over the center field wall for a 3-1 Boston victory.

During the mlby|2004 Red Sox season, Nixon was unavailable for several months due to a and a tight thigh muscle. Upon his return, he generally worked as the starting throughout the regular and post-season. In the deciding game of the , Nixon hit a two-out, two-run double off the right field wall at Busch Stadium in in the top of the third inning to give Boston a 3-0 lead. Those were the last runs scored by either team in that game as the Red Sox swept the Cardinals for the team's first World Series title in 86 years. For the series, Nixon batted .357 and drove in three runs.

He also endeared himself to Sox fans by briefly wearing a , one of the many unconventional and bizarre hairstyles sported by the Red Sox over the course of the 2004 season.

Trot Nixon is considered the inspiration for the expression "Boston Dirt Dogs". The signature is that of a "scrapper", a player who hustles and isn't afraid to get dirty to win a game.

Loved by Boston's fans, Nixon is known for an extremely volatile temper and steadfast dedication to his teammates. In August 2005, while officially on the disabled list, Nixon remained in uniform and in the dugout with the rest of the team during the game. When teammate (who often acted as Nixon's right field replacement) hit a long fly ball off of the , the umpires ruled it a double. Nixon leapt off the bench and argued with such passion that Kapler's hit had been a home run (television replays confirmed that the hit had landed above the home run line, and thus should have been ruled a two-run homer) that he was ejected from the game.

On , 2006, with two outs in the fifth inning of the final game of the season, manager replaced Nixon in right field with rookie David Murphy. Knowing Nixon might be playing his final game with the Sox, the fans delivered a grateful ovation to Nixon as he ran off the field. Said Nixon, when asked if it was difficult playing what may have been his last game for the Red Sox:

Following the 2006 season, Nixon was not offered salary arbitration by the Red Sox as the team pursued and eventually signed , coupled with the fact that Boston had a fourth outfielder, , on the roster. [ [http://www.boston.com/sports/baseball/redsox/articles/2006/12/02/no_arbitration_for_nixon Boston Red Sox - No arbitration for Nixon - The Boston Globe ] ]

In January mlby|2007, Nixon signed a one-year, $3 million dollar contract with the . Instead of going with the number 7, which he wore during his entire career in Boston, Nixon chose to wear number 33. The decision was made in part by his son Chase, who chose the number based on the fact that Nixon will turn 33 years of age in April.

In February by|2008, he signed a minor league contract with an invitation to spring training with the and was subsequently sent to their Triple-A affiliate the . [cite web |url=http://www.bostonherald.com/sports/baseball/red_sox/view/2008_05_27_Time_running_out_for_ex-Red_Sox_right_fielder_Trot_Nixon/srvc=redsox&position=5 |title=Time running out for ex-Red Sox right fielder Trot Nixon | date=2008-05-27 |publisher= | author= |accessdate=2008-05-27]

Nixon has a wife, Kathryn, and two sons: Chase (born , ) and Luke (born , ). Nixon was flying back to Boston to be at Chase's birth when all air traffic was halted due to the September 11 attacks. His father lives in , and his grandmother and cousins in .