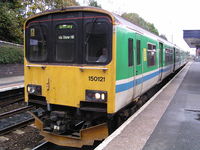 A Centro liveried train at Kidderminster.

Privatisation in the 1980s and 1990s led to the end of Centro as a public transport operator. Its activities are now restricted to :

On its formation in 1969 the PTE acquired the vehicles and other assets of the municipal bus fleets of Birmingham, Walsall, West Bromwich and Wolverhampton. The former Birmingham City Transport was by far the largest constituent part of the combined fleet, and a modified version of that operator's blue and cream livery was adopted by the PTE. The ex-Birmingham assets became 'South Division', with the others forming the Walsall-based 'North Division'.

Although it was tasked with planning and coordinating bus and rail transport in the Passenger Transport Area, the Executive's activities in its early years were largely confined to partially integrating the inherited municipal bus operations. Most of the Passenger Transport Area was not served by PTE buses, and the Executive had minimal involvement in operation and planning of railway services. The Authority and Executive closed down the Walsall trolleybus system in 1970, and did nothing to stop closure of the Wolverhampton Low Level to Birmingham Snow Hill railway in 1972.

In the West Midlands conurbation many bus services continued to be run by other operators. This was considered undesirable by the PTE, so it entered into negotiations to buy them out. In 1973 there was a transfer of assets and services between the Executive and the Midland Red company, giving WMPTE a bus near-monopoly within the conurbation. At its peak, its fleet numbered around 2,500 vehicles.[citation needed]

A picture of a Network West Midlands British Rail Class 323 EMU interior in the early 2000s.

In the mid 1970s the Executive began to take a more active interest in the development of local railway services, but their operation remained in the hands of British Rail. The Cross-City line, implemented in 1978, was a joint BR/WMPTE project, but modest in scope compared to Merseyrail's Loop and Link or the Tyne and Wear Metro.

In the 1980s WMPTA/WMPTE decided to restore rail services through Snow Hill station despite having made no effort to stop the closure of the Snow Hill lines in 1972. The two-stage restoration process, completed in 1995, did not include the Wolverhampton Low Level line, which was reserved for the Midland Metro.

The 1972 Local Government Act led to the creation, on 1 April 1974, of the West Midlands metropolitan county. As a result, WMPTE's "operating" area was adjusted to be coterminous with the new county, although it continued to operate some services out-of-county.

At the same time, the PTE took over a fifth municipal bus fleet (Coventry), which became its 'East Division'. The PTA was abolished, and its role taken over by the newly established West Midlands County Council.

When the County Council was abolished in 1986, a new Passenger Transport Authority was established, with membership drawn from the metropolitan district councils.

As a result of the 1985 Transport Act, bus services across Great Britain were deregulated. This brought about the creation of a private company, West Midlands Travel Ltd (WMT), which took over the bus assets and services of the WMPTE on 26 October 1986. From that date, WMPTE's functions were reduced to sundries such as transport planning, promotion, and concessionary passes.

WMT remained in public ownership under the West Midlands Passenger Transport Authority until 1991, when it was sold to its management and employees in a behind-closed-doors process in which external offers from other businesses such as Stagecoach were excluded. The sell-off was required as a condition of the government funding construction of Midland Metro. At the time, this was estimated to have cost the public purse £25 million.[11]

Unlike Greater Manchester, where the former PTE bus operations were split up to reduce the likelihood of a dysfunctional market, WMT was privatised as a single unit, with a market share of about 80%. Its power was further bolstered by the 'Travelcard' season ticket range inherited from WMPTE, to which other operators had no access. The extent of consumers' losses from the WMT monopoly are not known, but in 2009 the Office of Fair Trading found that bus fares tended to be about 9% higher in areas where there was no competition.[12]

In 2009 Centro expected to lose £800,000 as a result of having money invested with an Icelandic bank.[13] It had previously invested funds with the Bank of Credit and Commerce International, which was forcibly closed in 1991.[citation needed]

In October 2009, it emerged that chief executive Geoff Inskip was likely to receive a "bumper" 18% pay rise, worth £24,000-a-year, irrespective of any general public sector restraint. According to the Authority's spokesman, the raise was needed to bring the pay into line with the "industry standard".[14][15]

In the early 1990s WMPTE adopted the 'corporate' name of Centro, although the name was already being used by a transportation authority in New York State, USA.

In the late 1990s WMPTE planned a segmentation of the public transport offer, incorporating a tier called 'Network West Midlands' (NWM). The concept, still being pursued as late as 2003,[16] was never implemented. The name was re-used for a rebranding of the existing bus and train service from 2005 onwards, based on the premise that survey information had indicated that more people would use public transport if a strong brand was identifiable.[citation needed] The NWM graphic design resembled the British government's Preparing for Emergencies 'campaign'.

Promotion of the brand has included television advertising, and a Youtube video.[17]

Following on from this, Centro's own corporate identity was reworked. Its new strapline, "transforming public transport", belies the fact that decisions on routes, frequencies, fares, and vehicle procurement are mostly made by other organisations, such as the Department for Transport, and National Express.[citation needed]

A plaque celebrating the rebuilding of Dudley Port station’s upper level in 1989.

Centro has backed the Gateway Plus project, over alternatives such as construction of an entirely new railway station for central Birmingham[citation needed]. Centro claims that Gateway Plus would "double the passenger capacity" of New Street station.[18]

In August 2009 Centro's chief executive backed construction of new railway in the West Midlands area for use by high speed trains, which would allow existing lines to have "better and more frequent local services".[19]

In the 1990s, Centro considered 'Showcase' to be a new approach to running buses. In parallel with the introduction of new shelters, timetables, and raised kerbs at stops, bus operators would introduce low floor vehicles, and run them to timetable.[citation needed]

The designation was used for a few routes only. Increased use of low floor buses, and appearance of basic timetables at most stops from 2006, led to decreased use of the 'Showcase' name.[citation needed]

Construction of a light rail network has been pursued since the mid 1980s, but only one line has been built. Midland Metro Line 1 carries about 5 million passengers per year, one third of the number forecast by Centro.

Centro has shown a sporadic interest in bus based rapid transit. In the mid 1980s, it promoted the short-lived 'Tracline' guided bus,[20] and since 2006 it has promoted more conventional bus rapid transit under the name 'Sprint'.[21]

As one of the biggest providers in central England, Centro has spent £14 million on building car parks since 1997.[22]

In 2009 Centro provided two members of the five-seat board administering speed cameras in the West Midlands county. This was restructured to a three-seat board, with (in March 2010) no mention of Centro. Peter Francis, one of the two members credited from Centro in 2009, was now credited as being from 'CEPOG'.[23] Councillor Angus Adams, 'chair' of the speed camera board, was also Centro's 'Chairman of the Capital Projects Committee' and 'Lead Member for District Liaison & Metro/Rapid Transit Development'.[1]

On its website, Centro has stated that it is "committed to sustainable forms of transport which benefit the environment and help to reduce global warming. It is especially important when you consider that road congestion on the West Midlands' busy roads costs regional businesses more than £2.3 billion a year." However, no explanation of this figure is given.[24]

In addition, the Letzgogreen (sic) website, using static cartoon figures of a style similar to South Park, has been set up to project Centro's view of public transport to schoolchildren. It suggests that a car journey from an unspecified point, near Marston Green, to Coventry would produce more carbon dioxide than a combined service 71 bus and train journey.[25] However, a report co-funded by Centro stated that public transport in PTE areas has generally been more polluting than car travel for many years.[26]

Each transport operator has its own ticket range. In general a ticket is not usable on another company's service, but Centro passes with multi-operator validity are available, allowing travel on rail and/or bus, for periods ranging from 1 day to 1 year.

Chris Perry, then Centro's 'Customer Services Assistant Director', announced that Centro's nnetwork and nbus [sic] commercial tickets would "go Smart from April 2009".[29] This did not happen, allegedly due to computer problems,[30] and the completion date for network implementation is not known. The Birmingham Mail newspaper reported that local rail implementation would start in 2010.[31]

Centro publishes a number of documents related to corporate governance and transport strategy, including 'best value' reports, though in practice, there is no requirement to deliver best value. The reporting period runs from 1 April to 31 March of the following year.

The Centro website does not provide an organigramme, or describe the size and activities of individual departments.

Centro falls within the scope of the 2000 Freedom of Information Act (FOIA)[33] but in practice, more information was available before the Act was passed. For example, the number of statistics provided in the Centro 1997-98 Annual Statistical Report was much larger than the 2008-2009 equivalent.

Privatisation of transport operations has also affected disclosure. Centro has referred at least one person requesting information about property that it owns to Travel Midland Metro, a private concern apparently exempt from FOIA.[28]

The Integrated Transport Authority and earlier Passenger Transport Authority have used committee structures, the form of which has changed over time. Membership is normally a subset of the full 27-member Authority. In March 2010, extant Committees were listed[34] as:

Councillors receive additional payments for serving on the Transport Authority, but the Centro website does not detail scope of these payments, individual hours spent on ITA business, number of meetings attended by councillors, or agendas and minutes of meetings.

Centro has stated that public participation is available through Transport Users' Forums, which "meet on average every two months at a local venue" in the 7 district areas, and allow submission of views to the Transport Authority via the Transport Strategy Committee.[35]

In the latest available accounts (2007-2008), Transport Authority councillors are named in the West Midlands Special Needs Transport directors list.[36] Special needs transport is effectively a monopoly, and not exposed to a tender process of the type used to fill nominal gaps in the main bus network.

Pictures of Centro liveryed Class 150 DMUs in the year 2001. Dorridge is above and Solihull is below.