The British Rail Class 323 electric multiple units were built by Hunslet TPL from 1992-93. Forty-three 3-car units were built for inner-suburban services around Birmingham and Manchester. These trains were the last vehicles to be built by the struggling manufacturer Hunslet before it collapsed.

In the early 1990s the Regional Railways sector of British Rail placed an order for new EMUs to both replace older units and to work services on the newly electrified Birmingham Cross-City Line. The contract was awarded to Hunslet Transportation Projects Limited of Birmingham, who were a new company set up by a team of engineers and managers that had left Metro Cammell. Metro Cammell were also at the time a Birmingham based renowned train builder. During the course of the project the company was acquired by Jenbacher transport system who supported the company in the hope of further orders for new trains but these units proved to be the last trains built by the company for the UK market. The trains were also some of the last constructed in the UK pre rail privatisation as Class 323 was in production just before the infamous 1,064 day gap in train orders. Hunslet TPL went on to deliver designs for Keretapi Tanah Melayu Class 81 EMU which was built under the company's control and Glasgow Underground Trailers which were assembled by sister company Hunslet Barclay. Presently the company continues in Birmingham as Transys Projects Limited they remain active in the rail industry providing consultancy, refurbishment and enhancements to rail vehicles both in the UK and internationally.[2]

In December 2007 the Class 323 Units operated by Northern received a coveted industry award the Modern Railways "Silver Spanner" because a team engineers maintaining Northern Rail's 17 Class 323 trains had increased the service's reliability by over 100%.

Forty-three 3-car units were built, numbered in the range 323201-243. Each unit is formed of two outer driving motor vehicles (each equipped with four Holec DMKT 52/24 asynchronous traction motors), and a central intermediate trailer with a Brecknell Willis High Speed pantograph for collecting the overhead current of 25kV ac. The technical description of the unit formation is DMSO+PTSO+DMSO. Individual vehicles are numbered as follows:

When the electrification of the Leeds/Bradford - Skipton/Ilkley Airedale/Wharfedale Lines was confirmed in the early 1990s Regional Railways and West Yorkshire PTE applied to the government for 14 units to add onto the 43 units already on order. At the time government spending on the railways was restricted due to the looming privatisation and eventually, when funding was not forthcoming, the order was cancelled and 21 second-hand 308s from Network SouthEast were used in the interim before the 333s were delivered in 2000. The class 323's are known for making a distinctive sound every time they enter or leave a station. 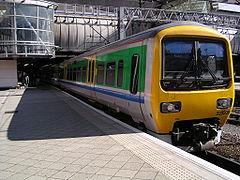 Class 323, no. 323209 waiting at Birmingham New Street on 24th September 2003. This unit was operated by Central Trains (now London Midland) and is painted in Centro livery. 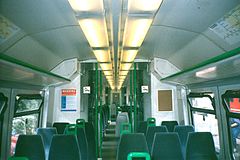 A picture of a Network West Midlands British Rail Class 323 EMU interior in the early 2000s.

The units were delivered in 1993/94 painted in Centro green and white livery with a blue stripe. They were originally allocated to Bletchley Depot, but have since been reallocated to Soho when the elderly class 304's retired. Since the 323's moved there, a workshop has been built for maintenance and repairs.

It was intended for the units to be introduced on the newly electrified Cross-City Line from Redditch to Lichfield (via Birmingham New Street). However, all did not go according to plan, and initially the units suffered from reliability problems. This meant that the ageing fleets of Class 115, 116, 117, 118 and 119 diesel multiple units, which the Class 323 units were meant to replace, continued in service longer than planned. They were finally withdrawn in 1995 once the Class 323 units had become more reliable.

The units were also used on various other routes, including Coventry to Wolverhampton, and Birmingham to Walsall (Chase Line) suburban services, as well as longer distance Birmingham to Liverpool Lime Street services. On these services, they were used alongside the existing fleets of Class 310/1 and Class 312 slam-door units. The introduction of the new trains also allowed the withdrawal of the elderly Class 304 units, and the cascading of Class 308 units to operate suburban services around Leeds.

Since being introduced, the units have undergone works attention, which included the fitting of CCTV surveillance equipment. The Centro livery was also modified, with the addition of yellow doors to aid the visually impaired and the internal door controls replaced with DDA-compliant raised buttons with differing colours for open and closed.

323205 has been fitted with a new experimental, prototype interior saloon lighting diffuser, called 'BASIL' (short for Bright Ambient Sensing Interior Lighting) which is slimmer, more modern looking and makes the interior look brighter. The lights are actually LED and automatically light up brighter whenever the train is in a tunnel or at night. The system does this quicker than the human eye can blink, so passengers cannot notice the sudden change in brightness.

They were used to replace older stock of Classes 304 and 305, although some of the latter were retained in reserve until 2000. The units are used on services on the Manchester electrified network, which is primarily to the south of the city. Services include: 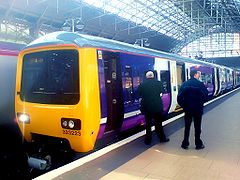 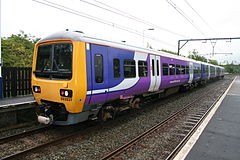 The fleet is maintained on behalf of Northern Rail by West Coast Traincare Limited at its Manchester Traincare Centre Longsight, which is a few miles south of Manchester Piccadilly with units stabled at Stockport Edgeley carriage sidings where they receive overnight cleaning.

The trains were originally painted in the Greater Manchester PTE livery.[3] Two units, Nos. 323224 and 323233 were painted into NWT dark blue livery with gold stars. The franchise was later acquired by First Group and renamed First North Western (FNW). In the period 2003-2004, the entire fleet was refurbished, which included a repaint into FNW blue and magenta "Barbie" livery.

In June 2007, the Northern Class 323s began a refurbishment programme that included the introduction of over 20 reliability improvement modifications, replacement of cab desk panels and new LED lighting for the front of the trains. No. 323239 was the first unit to receive this upgrade and was released back into passenger traffic on 18 August 2007.

On 7 March 2011 a C4+C6 overhaul on the fleet commence at the fleets "home" Depot - Manchester Traincare Centre. The overhaul includes attention to underframe equipment - including Brake equipment and Bogies - passenger doors, couplers, roof equipment as well as an internal refresh which includes the replacement of the saloon floor boards and floor covering.

323235 spent 6 months out of action after derailing at Alderley Edge. This occurred on 13 September 2008 when shortly after operating the 23:31 Deansgate to Alderley Edge service 323235 had run ECS into the up siding and was returning to Stockport for overnight stabling. It was at this point that the driver passed a signal at danger which resulted in the train derailed on the points, causing wheel damage to one of the bogies and damaging the traction motor. The unit was travelling at about 10 mph (16 km/h) when the incident occurred. During the time it was out of service receiving repairs, it was also put through the fleet modification program and was repainted in Northern Rail livery. It re-entered service on Saturday 24 January.

323231 spent 16 months out of service after derailing at Congleton on 18 December 2008, after hitting a car which had rolled down Mow Cop onto the track close to the crossing below. It suffered a lot of underbody damage as well as losing its pantograph. The unit was repaired at Wolverton, and returned to Manchester on 14 April 2010. It is expected to return to service as soon as testing is completed. The return to service of 323231 has seen the trains between Manchester Piccadilly and Alderley Edge revert to EMU operation.