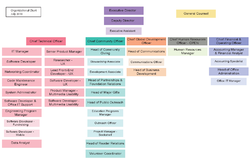 An organizational chart (often called organization chart, org chart, organigram(me), or organogram(me)) is a diagram that shows the structure of an organization and the relationships and relative ranks of its parts and positions/jobs. The term is also used for similar diagrams, for example ones showing the different elements of a field of knowledge or a group of languages.

An organizational chart of a company usually shows the managers and sub-workers who make up an organization. It also shows the relationships between directors : managing director chief executive officer: various departments... In many large companies the organization chart can be large and incredibly complicated and is therefore sometimes dissected into smaller charts for each individual department within the organization.

There are three different types of organization charts:

There are several limitations of organizational charts: 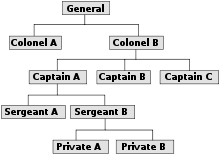 The following is an example of a simple hierarchical organizational chart is the image-chart on the right.

An example of a 'line relationship' (or chain of command in military relationships) in this chart would be between the Manager and the two Supervisors. These two colonels are directly responsible to the general.

An example of a 'lateral relationship' in this chart would be between "Foreman A", and "Foreman B" who both work on level and both report to the "Workers A".

Various shapes such as rectangles, squares, triangles, circles etc. can be used to indicate different roles. Colour can be used both for shape borders and connection lines to indicate differences in authority and responsibility, and possibly formal, advisory and informal links between people. A department or position yet to be created or currently vacant might be shown as a shape with a dotted outline. Importance of the position may be shown both with a change in size of the shape in addition to its vertical placement on the chart.