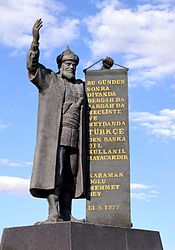 Statue depicting Mehmed Beg declaring Turkish language as the official language of the state and all its institutions.

Mehmet Fuat Köprülü suggested that the government officials, who had been educated under the influence of the Persian culture, had used the Persian language in their state's official buisiness, and this strong compulsory of using Persian as official language had lasted until the Karamanids lord Mehmed Bey's invasion of Konya.[2]

Agop Dilaçar, who is known for his works on the Sun Language Theory, claimed that Mehmed Bey might have declared Turkish language the official language of the state[3][4]. According to Dilaçar, in his firman dated 13 May (15 May ?) 1277, he ordered that "from that day forward, in the council, in the dervish lodge, in the court, in the assembly, in the square, no language but Turkish should be spoken". [3][5]

Before him, the Seljuq elite in Anatolia used Persian in literature and Arabic in government and science. The Turkmen however could not understand these languages.[citation needed]

After his failed rebellion in Ankara, he died in a conflict against Seljuq-Mongol troops.[citation needed]