Diyarbakır (Ottoman Turkish دیاربکر, Diyâr-ı Bekr; Kurdish ئامه‌د, Amed; anc. Amida, Syriac: ܐܡܝܕ, Amid ) is one of the largest cities in southeastern Turkey. Situated on the banks of the River Tigris, it is the administrative capital of the Diyarbakır Province and with a population of about 843,460 it is the second largest city in Turkey's South-eastern Anatolia region, after Gaziantep. Within Turkey, Diyarbakır is famed for its culture, folklore, and watermelons. The population of Diyarbakır is made up predominantly of Kurdish people.[citation needed]

The name of the city is inscribed as Amid on the sheath of a sword from the Assyrian period, and the same name was used in other contemporary Assyriac and Arabic works.[2] The Romans and Byzantines called the city Amida.[2] Among the Artukid and Akkoyunlu it was known as "Black Amid" (Kara Amid) for the dark color of its walls, while in the Zafername, or eulogies in praise of military victories, it is called "Black Fortress" (Kara Kale).[2] In the Book of Dede Korkut and some other Turkish works it appears as Kara Hamid.[2]

Origin of the current name

Following the Arab conquests in the 7th century, the Arab Bekr tribe occupied this region,[2] which became known as became known as the Diyar-ı Bekir (landholdings of the Bekr tribe).[3][4] In 1937, Atatürk had the city renamed Diyarbakır, which remains its current name.[2]

Amid(a) was the capital of the Aramean kingdom Bet-Zamani from the 13th century B.C. onwards, and later part of the Neo Assyrian Empire. Amid is the name used in the Syriac sources, which also testifies to the fact that it once was the seat of the Church of the East Patriarch and thus an original Assyrian/Syriac stronghold that produced many famous Assyrian theologians and Patriarchs. Some of them found their final resting place in St. Mary Church. There are many relics in the Church, such as the bones of the apostle Thomas and St. Jacob of Sarug (d. 521).

The city was called Amida when the region was under the rule of the Roman (from 66 BC) and the succeeding Byzantine Empires.[5]

From 189 BC to 384 AD, the area to the east and south of present-day Diyarbakır, was ruled by a kingdom known as Corduene.[6]

In 359, Shapur II of Persia captured Amida after a siege of 73 days. The Roman soldiers and a large part of the population of the town were massacred by the Persians. The siege is vividly described by the Roman historian Ammianus Marcellinus who was an eyewitness of the event and survived the massacre by escaping from the town.[7]

Armenian historians at one time hypothesized that Diyarbakır was the site of the ancient Armenian city of Tigranakert, (pronounced Dikranagerd in the Western Armenian dialect) and by the 19th century the Armenian inhabitants were referring to the city as Dikranagerd. Scholarly research has shown that while the ancient Armenian city was close by, it was not in the same place. The real location of Dikranagerd remains the subject of debate, but Armenians who trace their ancestry to Diyarbakır continue to refer to themselves as "Dikranagerdtsi" (native of Dikranagerd.) The "Dikranagerdtsis" or Armenians of Diyarbakır were noted for having one of the most unusual dialects of Armenian, one difficult for a speaker of standard Armenian to understand.[citation needed]

In 639 the city was captured by the Arab armies of Islam and it remained in Arab hands until the Kurdish dynasty of Marwanid ruled the area during the 10th and 11th centuries. After the Battle of Manzikert in 1071, the city came under the rule of the Mardin branch of Oghuz Turks and then the Anatolian beylik of Artuqids (circa 1100–1250 in effective terms, although almost a century longer nominally). The whole area was then disputed between the Ilkhanate and Ayyubid dynasties for a century, after which it was taken over by the rising Turkmen states of Kara Koyunlu (the Black Sheep) first and Ak Koyunlu (the White Sheep). It was also ruled by Sultanate of Rûm between 1241-1259. 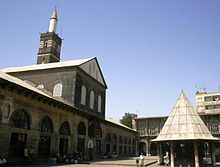 The city became part of the Ottoman Empire during Sultan Süleyman I's campaign of Irakeyn (the two Iraqs, e.g. Arabian and Persian) in 1534.[citation needed] The Ottoman eyalet of Diyarbakır corresponded to Turkey's southeastern provinces today, a rectangular area between the Lake Urmia to Palu and from the southern shores of Lake Van to Cizre and the beginnings of the Syrian desert, although its borders saw some changes over time.[citation needed] The city was an important military base for controlling this region and at the same time a thriving city noted for its craftsmen, producing glass and metalwork. For example the doors of Mevlana's tomb in Konya were made in Diyarbakır, as were the gold and silver decorated doors of the tomb of Imam-i Azam in Baghdad.

In the 19th century, Diyarbakır prison gained infamy throughout the Ottoman Empire as a site where political prisoners from the enslaved Balkan ethnic groups were sent to serve harsh sentences for speaking or fighting for national freedom.[8]

The 20th century was turbulent for Diyarbakir. Armenians killed there exceeded the city's Armenian population because it was a centre of deportation for all parts of the province.[9] The massacre of Armenians in Diyarbakir was witnessed by Rafael De Nogales,[10] who served as an officer in the Ottoman Army. At one time, Diyarbakır had a substantial Armenian and Assyrian population, who comprised almost a third of the city's population. However, almost all were killed. Few Assyrians and Armenians remain today. The holder of the Chaldean Catholic Archeparchy of Diyarbakir is currently living in Istanbul.

In the three decades following the establishment of the Turkish Republic in 1923, Diyarbakır became the object of Turkish-nationalist policies against Kurds, as a result of which Kurdish elites were destroyed and many Kurds deported to western Turkey.[citation needed]

The 41-year-old American-Turkish Pirinçlik Air Force Base near Diyarbakır, known as NATO's frontier post for monitoring the former Soviet Union and the Middle East, closed on 30 September 1997. This closure was the result of the general drawdown of US bases in Europe and the improvement in space surveillance technology. The base housed sensitive electronic intelligence-gathering systems that monitored the Middle East, the Caucasus and Russia.[citation needed]

Diyarbakır has a semi-arid climate. Summer are very hot and very dry, due to its location on the Mesopotamian plain which is subject to hot winds from the deserts of Syria and Iraq to the south. The highest recorded temperature was 44.8°C (112.64°F) on 28 August 1998. Winters are cold and wet and with frosty nights. Snowfall is quite common between the months of December and March, snowing for a week or two. The lowest recorded temperature was -23.4°C (-10.12°F) on 30 December 2006. 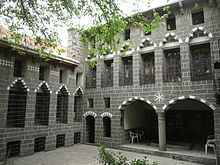 A typical example of Diyarbakır's historic architectural style, with masonry tiles built of the city's indigenous type of dark stone.

During the recent conflict, the population of the city grew dramatically as villagers from remote areas where fighting was serious left or were forced to leave for the relative security of the city. Rural to urban movement has often been the first step in a migratory pattern that has taken large numbers of Kurds from the east to the west. Diyarbakır grew from 30,000 in the 1930s to 65,000 by 1956, to 140,000 by 1970, to 400,000 by 1990,[12] and eventually swelled to about 1.5 million by 1997.[13] Today the intricate warren of alleyways and old-fashioned tenement blocks that makes up the old city within and around the walls contrasts dramatically with the sprawling suburbs of modern apartment blocks and cheaply-built gecekondu slums to the west.

After the cessation of hostilities between the Kurdistan Workers' Party (PKK) and the Turkish army, a large degree of normality returned to the city, with the Turkish government declaring an end to the 15-year period of emergency rule on 30 November 2002. In August 2005, the Kurdish mayor Osman Baydemir presented the Turkish Prime Minister Tayyip Erdoğan with the following complaints:

According to a November 2006 survey by the Sur Municipality, one of Diyarbakır's metropolitan municipalities, 72% of the inhabitants of the municipality use Kurdish most often in their daily speech, followed by Turkish, and 69% are illiterate in their most widely used vernacular.[15]

Some jewelry making and other craftwork continues today although the fame of the Diyarbakır's craftsmen has long passed. Folk dancing to the drum and zurna (pipe) are a part of weddings and celebrations in the area.

Diyarbakır is known for rich dishes of lamb (and lamb's liver, kidneys etc.); spices such as black pepper, sumac and coriander; rice, bulgur and butter.

Diyarbakır's city walls, built by Constantius II and extended by Valentinian I between 367-375, stretch almost unbroken for about 6 kilometres.

Diyarbakır is surrounded by an almost intact, dramatic set of high walls of black basalt forming a 5.5 km (3.4 mi) circle around the old city. There are four gates into the old city and 82 watch-towers on the walls, which were built in antiquity, restored and extended by the Roman emperor Constantius in 349. In addition, the walls of Diyarbakir in the world after the Great Wall of China is the second largest city walls.[citation needed]